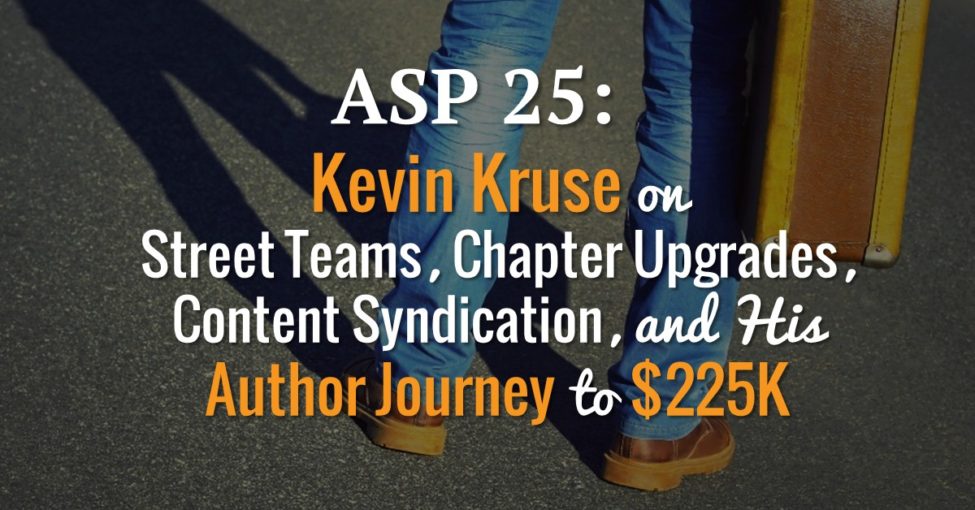 “Success is a journey, not a destination. The doing is often more important than the outcome.”

Kevin Kruse runs Author Journey to 100K and the Kevin Kruse blog. He also wrote a couple of books when he still had a day job. A year ago, he quit his job to focus on building an author business. His goal is to make six figures. Aside from writing and publishing, he also has other streams of income.

Today, we talk to Kevin about monetizing yourself as an author.

Kevin has mixed feelings about income reports. He loves reading them, but he thinks it sometimes takes away the message from being an authorpreneur.

Kevin also talks about how important it is to diversify as a self-published author to help with your income.

He’s made nearly $230K in the last year, which is really outstanding for a self-published author.

But as Steve reminds us, you don’t have to limit yourself to just writing books.

Since Kevin was already well known and had a big following, did that help him? How was he able to achieve that financial success in such a short time?

The bulk of that revenue came from speaking gigs. Kevin’s previous book, Employee Engagement 2.0, opened doors for a lot of speaking gigs because it was a hot business topic. Kevin used a keyword strategy that helped him have a successful launch. And the book was appealing because it was short and cheaper than traditionally published books.

He also starts building his list the minute he starts writing a book, and uses quizzes for lead magnet. Examples include:

It is important to note that your blog is the last place you want to post if you’re writing for a business audience. Instead, try to contribute to the following:

Kevin puts a bonus (chapter upgrade) at the end of each chapter of his book. After selling 615 copies sold of one book 54% of the readers went to the website and 72% of those opted in.

Chapter Upgrades: Can You Get Half Your Readers to Join Your Newsletter?

Here is an example of Kevin’s chapter upgrade: MasterYourMinutes.com. He typically uses different wording at the end of each chapter, but only offers one massive bonus.

Kevin also talks about the value of having a strong street team. How did he go about developing his team?

The goal was to establish an actual email-based conversation with as many people as possible. (Kevin learn this from Derek Halpern) Ask people to email you. This can help you figure out what topics to write about, help you ensure you aren’t stuck in the readers’ spam filters, and helps you identify super fans, who you can reach out to when you launch a book. These are the people you want on your street team.

One very very powerful technique is demonstrated in Will It Fly? by Pat Flynn. Pat got 57 reviews in a few days, and Kevin actually got 97 reviews in 24 hours.

You can also build a street team video. Follow this link for more information: 4 Ways to Build Your Email Subscriber Opt-In List [VIDEO]

Kevin’s street team technique is simple: Reward his team members. All members get a digital copy. If they leave a review, he sends them a print copy AND provides free access to a webinar or something else of value.

First of all, take a look at Kevin’s income report: Income Report December 2015 and Full Year.

Kevin didn’t write a book in January, and admits that he needs to refocus on his MITs (most important tasks). He plans to find the balance between writing and all the other tasks that he has to do.

For more information on Kevin, check out his podcast, Extreme Productivity with Kevin Kruse, on iTunes. The podcast plays once a week and is 10 to 15 minutes long, with a CTA at the end.

How To Sell Books On Amazon To Make Passive Income

How To Become A Freelance Writer And Earn Your First $1000

What Will It Cost You To Publish A Book?

What Is A Book Editor’s Salary?