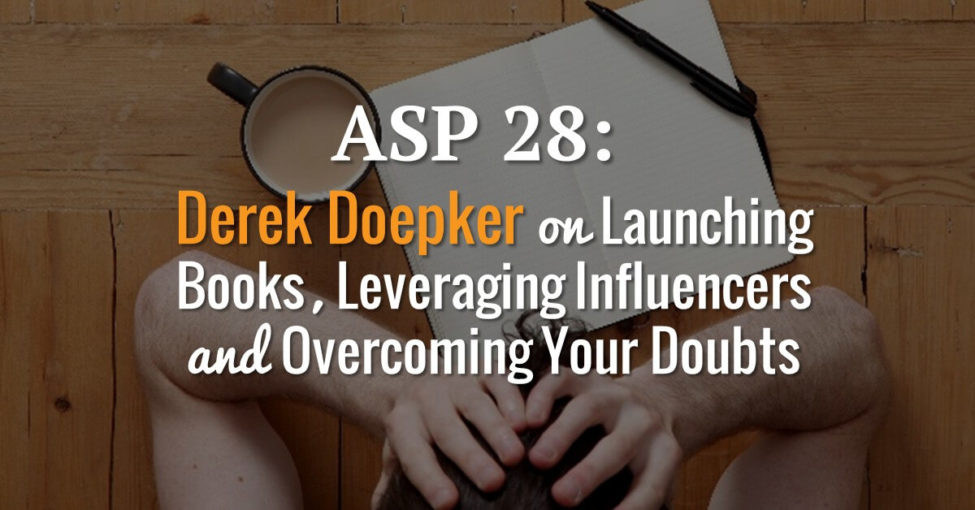 “He that is good for making excuses is seldom good for anything else.”

How did Derek get into self-publishing?

Derek would’ve never have imagined he’d be writing. He has a degree in music, and moved to LA “to become a rock star.” But he decided he wanted to make some money, and discovered blogging, affiliate marketing, and the online world. He also created a training course (18 hours of video and a 350-page book) that he failed to sell.

It was frustrating in the beginning, but then he discovered Kindle publishing. This was also a rocky start, but he stuck with it, and did well by the third book, 50 Fitness Tips You Wish You Knew, outranking Tim Feriss.

Other books by Derek can be found here and here.

How did Derek feel when your training course failed?

At the time, Derek felt disappointed. But looking back, he thinks it was the perfect setup for him to get into Kindle publishing.

He created a lot of content from that period, and what kept him going was the thought that he was going to “find a way to make it work.” He found a way to reuse and repurpose the content he created in later, more successful books. He also learned that a book that fails can be tweaked—a different title or cover could make the difference.

Ultimately, he discovered that self-publishing is a long-term business. You have to create value for people rather than thinking you are going to strike it rich with one quick book sale.

“Nine out of ten businesses fail. Some people don’t even try or are too scared to start a business. Just be willing to create ten businesses. That one that makes it will pay for the nine that didn’t.” – Brandon Broadwater

Derek’s latest book is Break Through Your BS. In the process of writing it, he applied a number of lessons from his earlier books.

1 – The importance of a book title. You have to grab people’s attention.

2- Remember that you are writing for your people. What’s the emotional impact you want to elicit? Who are you speaking to? Write something that has personality and style.

3 – Collaborate with influencers and readers. It’s not just up to you to get your book out there. Reach out to influencers who have audiences that may want to read your book. But always remember to consider what’s in it for them. Give them reasons to assist you. Then reach out to them in the following ways:

How do you find these influencers?

It’s an organic process. Take note of authors that write similar books to yours while researching for your books. Compile their contact info, and reach out when the time is right.

Does Derek use Facebook groups to build up his readership before launch?

For Break Through Your BS, Derek drip fed content, as he was writing his book as Facebook posts.

He would look at the people who liked and commented on his posts and send them private messages.

“If you like the book, would you be willing to share it with your friends on social media? (Not required.)”

He would do surveys and get feedback on his book cover and subtitles, and in some cases even got free proofreading. They get invested in the book, so they shared it when it launched.

He also sent out a lot of signed copies to people he knew, especially those with a following.

How far out did he plan for this launch?

It took him about 60 days. He’d been through the process before, so this one was shorter.

If you work better under a deadline, create accountability using a case study group. Derek uses accountability, and would have had to pay a couple thousand dollars if he didn’t finish the book.

For someone just starting out, how do you build a pre-launch team and all those other things you talked about?

Find where the readers are, like Pat’s Facebook group. Again, approach it with the attitude of “What’s in it for them?” Give them more than what you’re asking for in return. Establish relationships, contribute, and serve—and you will find lasting success.

Derek wants to focus on helping heart-centered entrepreneurs. He’ll do this through coaching, live and online workshops, podcasting, and free webinars. You can sign up at Ebook Best-Seller Secrets for updates.

Final words: Setbacks are a setup for a breakthrough. Persevere and learn the lessons from failures.

Book Marketing 101: 37 Ways to Launch and Promote A Book

How To Create A Back Cover Blurb That Sells Your Book

This was a great topic to have a show on. I agree that making connections is vital and being an introvert can make it harder but not impossible. You just have to be creative.

I wanted to let you both know that I value everything you guys have done. I wish I could sign up for Authority Pub Academy but money is tight right now.

I hope to earn enough from my upcoming book launches to sign up for your course. In the meantime to show my appreciation for all your free content and hard work I made a resolution this year to read all your books and write reviews on Amazon. It is the most I can do for now and I’m excited about everything I’m going to learn.

Finally, Steve I hope this comes across the right way but I’ve found some errors in the first few books I’ve read (I’m reading from shortest to longest) and was wondering if you would like for me to send these to your VA so they can be corrected the next time you update? Let me know.