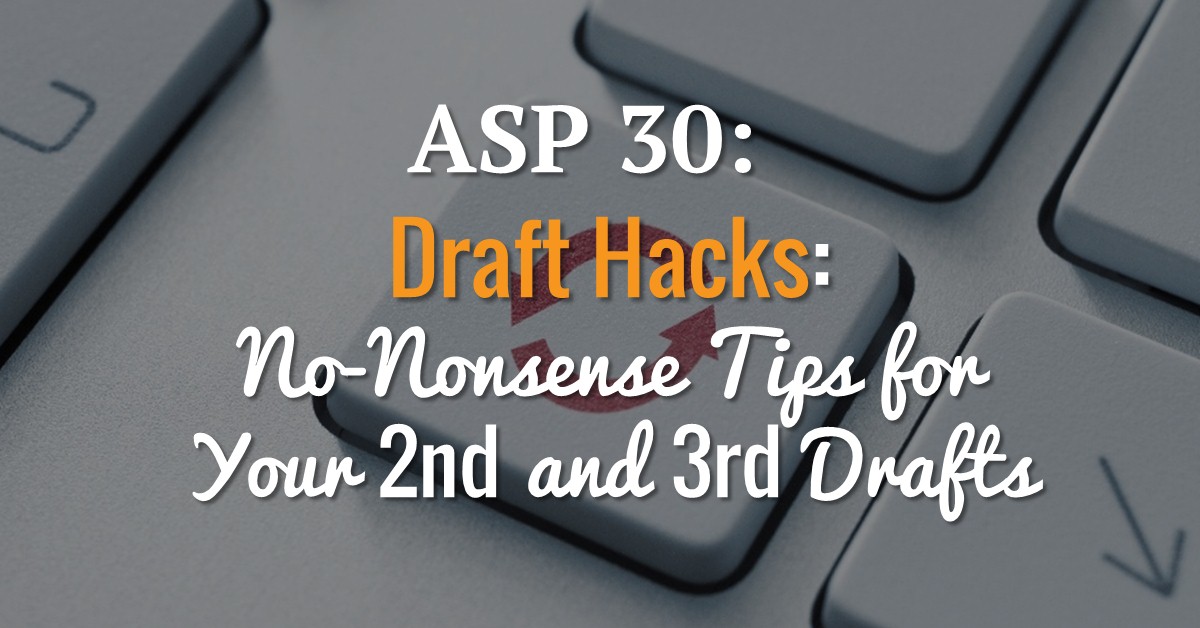 “I hate first drafts, and it never gets easier. People always wonder what kind of superhero power they’d like to have. I wanted the ability for someone to just open up my brain and take out the entire first draft and lay it down in front of me so I can just focus on the second, third and fourth drafts.”

In Steve and Barrie’s experience, the second and third drafts require you to be more meticulous whereas the first draft is more of stream-of-consciousness writing exercise. Today, the two authors talk about how to best polish your manuscript once the first draft is on paper.

Steve, you talk all the time about writing a crappy first draft. Why should writers not worry about perfecting the first draft as they go?

People have the tendency to want to get everything right in the first go, which usually leads to writer’s block. Just get things done and write anything that comes to mind. You’ll be surprised at what you come up with when you’re just focused on writing (the “flow”) the first draft as fast as possible. Enjoy the process so that it becomes more fun. Be as creative as possible with your first draft, because you’re going to edit it later on. No one has to see your first draft.

How do you write your first draft?

Tip: With first drafts, just write down whatever is on your mind.

How do you get back to your flow?

When you have stepped away from your manuscript for a break, it can sometimes be difficult to get back into the flow of writing. Barrie accomplishes this by reading the last few paragraphs she wrote the day before, while Steve marks the page with “Start writing about this…” before he stops, so he knows what to write about when he starts again.

What should you focus on when working on your 2nd draft? What are you looking for specifically?

Make sure everything makes sense and reads well. You’ll probably delete and rewrite a lot of stuff and do extra research. The first draft should be involve creative thinking, while the second should involve logical thinking.

Do you review your 2nd draft on your computer or as a printed copy?

Some people print out their second drafts, but it depends on what works for you. The benefits of a printed copy are that sometimes your copy simply reads differently in a printed format than on your computer. Also, you can also make notes in longhand, which forces your brain to slow down and really think about what you’re doing, and process ideas more creatively.

Do you set the 2nd draft aside for a few days after you work on it? Why?

Steve doesn’t, but he’s thinking about adding this to his process. A lot of fiction writers do this. But thus far, Steve has tried to stick to a tight publishing schedule.

Barrie lets a couple of days go by so she can be objective about her second draft. After three days or so, she starts on her third draft.

Some authors even send their second draft to their street team to get some feedback.

The important thing is to find what works best for you, and then stick to it.

Restructuring content can be a big pain, but sometimes it needs to be done. How do you move content around and restructure?

Leslie and Elisa from Writership.org will talk about structural editing in a future episode. But in general, it involves the overall layout or format of the book and how to improve reader experience.

When writing the second draft, you can start moving content around to the chapters that fit it best. You can easily do this with Scrivener, although Steve prefers Word. Look at the titles of each section and see how it flows.

At this point, why do you need a 3rd draft? What do you work on in the 3rd draft?

The third draft is where I make sure the copy is tight. I cut out about 10% of the content. In his book On Writing, Stephen King says, “The adverb is not your friend.” If you don’t need to say it, then sometimes you shouldn’t. You don’t need to over-explain everything to your readers.

For the nuts and bolts of writing, read Elements of Style by William Strunk Jr.

When do you send the book to your editor?

Steve writes a third draft before sending it to his editor. And both Steve and Barrie learn so much from their editors, who catch a lot of grammatical errors and other mistakes. It’s important to work with an editor who understands the way that you write and speak to your audience. Developing a style guide that respects your voice is part of the editorial process. There are many great books that break a lot of grammar rules, but the key is to do so consistently.

What’s the most labor-intensive phase?

Can you ever get caught up in editing overkill? When is “good enough” enough?

Once you start hitting the fifth and sixth draft, it’s definitely time to send it to the editor. The reality is that the rewriting and polishing process can go on indefinitely, and there comes a point where you just have to let go. It’s better to “ship” it and learn from the experience.

Remember, you have to stay on a publishing schedule to build a successful book-based business.

Looking for a supportive community of writers and authors?

Be an Authority and join the Authority Self-Publishing Facebook group.

1 thought on “ASP 30: Draft Hacks: No-Nonsense Tips for Your 2nd and 3rd Drafts”