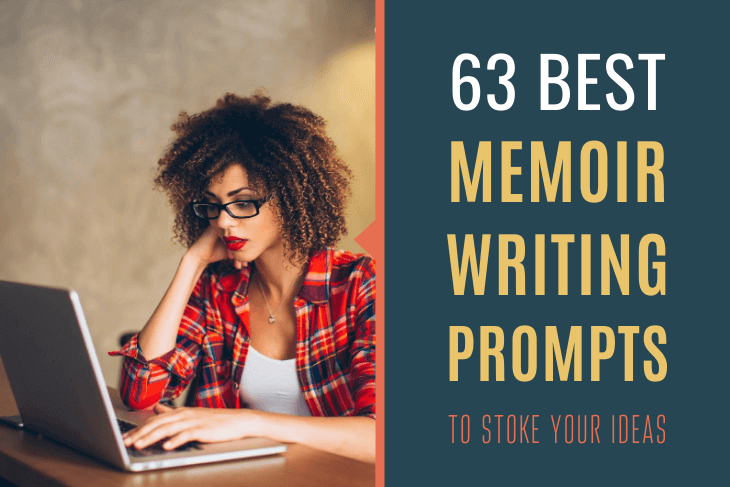 You’re writing a memoir. But you’re not sure what questions or life lessons you want to focus on.

Even if only family members and friends will read the finished book, you want to make it worth their time.

This isn’t just a whimsical collection of anecdotes from your life.

You want to convey something to your readers that will stay with them.

And maybe you want your memoir’s impact to serve as your legacy — a testament to how you made a small (or large) difference.

The collection of memoir questions in this post can help you create a legacy worth sharing.

So, if you don’t already have enough ideas for a memoir, read on.

What Are the Primary Parts of a Memoir?

With that in mind, let’s look at five elements that tie a memoir together, rendering it more enjoyable.

Biographies are histories that may not hew to a cohesive theme. But memoirs focus on inspiring and enlightening experiences and events.

As such, books in the genre promote a theme or idea that binds the highlighted happenings to an overarching reflection point or lesson.

Many people are super at sniffing out insincerity, and most folks prefer candidness.

So while exact dates and logistical facts may be off in a memoir, being raw and real with emotions, revelations, and relational impacts is vital. To put it colloquially: The best personal accounts let it all hang out.

People prefer inspiring stories. They want to read about people overcoming obstacles, standing as testaments to the tenacious nature of the human spirit. Why?

Because it engenders hope. If this person was able to achieve “x,” there’s a possibility I could, too. Furthermore, people find it comforting that they’re not the only ones who’ve faced seemingly insurmountable impediments.

Readers crave emotion. And for many of the stoic masses, books, plays, television shows, and films are their primary sources of sentimentality.

Historically, the best-performing memoirs are built on emotional frameworks that resonate with readers. The goal is to touch hearts, not just heads.

In a not-so-small way, memoirs are like romance books: Readers want a “happy” ending. So close strongly. Ensure the finale touches on the book’s central themes and emotional highlights.

End it with a smile and note of encouragement, leaving the audience satisfied and optimistic.

Examples of Good Starting Sentences for a Memoir

We’ve looked at the elements that make memoirs shine. Now, let’s turn our attention to one of the most important parts of a personal account: the opening sentence.

We’ve scoured some of the most successful, moving memoirs of all time to curate a list of memorable starting sentences. Notice how all of them hint at the theme of the book.

1. “They called him Moishe the Beadle, as if his entire life he had never had a surname.” From Night, a first-hand account of the WWII Holocaust by Elie Wiesel

2. “My mother is scraping a piece of burned toast out of the kitchen window, a crease of annoyance across her forehead.” From Toast: The Story of a Boy’s Hunger, foodie Nigel Slater’s account of culinary events that shaped his life.

3. “Then there was the bad weather.” From A Moveable Feast, Ernest Hemingway’s telling of his years as an young expat in Paris

4. “You know those plants always trying to find the light?” From Over the Top: A Raw Journey of Self-Love by Queer Eye for the Straight Guy’s beloved star, Jonathan Van Ness

5. “What are you looking at me for? I didn’t come to stay.” From Maya Angelou’s masterpiece, I Know Why the Caged Bird Sings, the story of persevering in the face of seemingly insurmountable obstacles

6. “I’m on Kauai, in Hawaii, today, August 5, 2005. It’s unbelievably clear and sunny, not a cloud in the sky.” From What I Talk About When I Talk About Running by Haruki Murakami, a memoir about the fluidity of running and writing

7. “The soil in Leitrim is poor, in places no more than an inch deep. ” From All Will be Well, Irish writer John McGahern’s recounting of his troubled childhood

8. “The past is beautiful because one never realizes an emotion at the time.” From Educated, Tara Westover’s engrossing account of her path from growing up in an uneducated survivalist family to earning a doctorate in intellectual history from Cambridge University

9. “I flipped through the CT scan images, the diagnosis obvious.” From When Breath Becomes Air by Paul Kalanithi, the now-deceased doctor’s journey toward mortality after discovering he had terminal cancer

10. “Romantic love is the most important and exciting thing in the entire world.” From Everything I Know About Love by Dolly Alderton, a funny, light-hearted memoir about one woman’s amorous journey from teenager to twentysomething

Use the following questions as memoir writing exercises. Choose those that immediately evoke memories that have stayed with you over the years.

Group them by theme — family, career, beliefs, etc. — and address at least one question a day.

For each question, write freely for around 300 to 400 words. You can always edit it later to tighten it up or add more content.

1. What is your earliest memory?

2. What have your parents told you about your birth that was unusual?

3. How well did you get along with your siblings, if you have any?

4. Which parent were you closest to growing up and why?

5. What parent or parental figure had the biggest influence on you growing up?

6. What is your happiest childhood memory?

7. What is your saddest or most painful childhood memory?

8. Did you have good parents? How did they show their love for you?

9. What words of theirs from your childhood do you remember most, and why?

10. What do you remember most about your parents’ relationship?

11. Were your parents together, or did they live apart? Did they get along?

14. What shows or movies influenced you most during your childhood?

15. What were your favorite books to read, and how did they influence you?

16. If you grew up in a religious household, how did you see “God”?

17. How did you think “God” saw you? Who influenced those beliefs?

18. Describe your spiritual journey from adolescence to the present?

19. Who was your first best friend? How did you become friends?

20. Who was your favorite teacher in elementary school, and why?

21. Did you fit in with any social group or clique in school? Describe your social life?

22. What were your biggest learning challenges in school (academic or social)?

23. Who was your first crush, and what drew you to them? How long did it last?

24. What was your favorite subject in school, and what did you love about it?

25. What do you wish you would have learned more about growing up?

26. What did you learn about yourself in high school? What was your biggest mistake?

27. What seemed normal to you growing up that now strikes you as messed up?

28. How old were you when you first moved away from home?

29. Who gave you your first kiss? And what do you remember most about it?

30. Who was your first love? What do you remember most about them?

31. Was there ever a time in your life when you realized you weren’t straight?

32. Describe a memorable argument you had with one of your parents? How did it end?

33. Have you lost a parent? How did it happen, and how did their death affect you?

34. What was your first real job? What do you remember most about it?

35. How did you spend the money you earned with that job?

36. At what moment in your life did you feel most loved?

37. At what moment in your life did you feel most alone?

38. What do you remember most about your high school graduation? Did it matter?

39. What’s something you’ve done that you never thought you would do?

40. What has been the greatest challenge of your life up to this point?

41. What did you learn in college that has had a powerful influence on you?

42. How has your family’s financial situation growing up influenced you?

43. How has someone’s harsh criticism of you led you to an important realization?

44. Do you consider yourself a “good person”? Why or why not?

45. Who was the first person who considered you worth standing up for?

46. If you have children, whom did you trust with them when they were babies?

47. Did you have pets growing up? Did you feel close or attached to any of them?

48. Describe someone from your past whom you’d love to see again.

49. Do you have a lost love? If yes, describe them, how you met, and how you lost them.

50. Describe a moment when you made a fool of yourself and what it cost you.

51. What is something you learned later in life that you wish you’d learned as a child?

52. How do you want others to see you? What words come to mind?

53. What do you still believe now that you believed even as a child or as a teenager?

54. What do you no longer believe that you did believe as a child or teenager?

55. When have you alienated people by being vocal about your beliefs?

56. Are you as vocal about your beliefs as you were when you were a young adult?

57. Are you haunted by the consequences of beliefs you’ve since abandoned?

58. How have your political beliefs changed since you were a teenager?

59. Have you ever joined a protest for a cause you believe in? Would you still?

60. How has technology shaped your life for the past 10 years?

61.Has your chosen career made you happy — or cost you and your family too much?

62. What comes to mind if someone asks you what you’re good at? Why does it matter?

63. How is your family unique? What makes you proudest when you think about them?

How will you use these memoir writing prompts?

These memoir topics should get ideas flooding into your mind. All you have to do, then, is let them out onto the page. The more you write, the easier it will be to choose the primary focus for your memoir. And the more fun you’ll have writing it.

That’s not to say it’ll be easy to create a powerful memoir. It won’t be. But the more clarity you have about its overall mission, the more easily the words will flow.

Enjoy these memoir writing exercises. And apply the same clarity of focus during the editing process. Your readers will thank you.