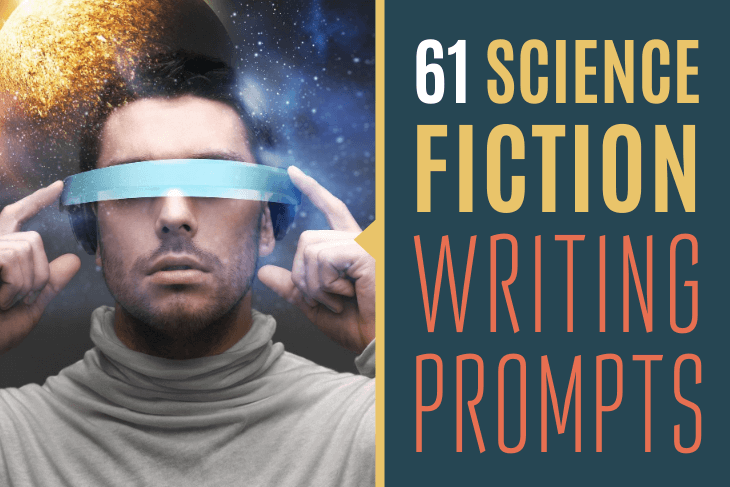 Your favorite science fiction series (or movie) has got you thinking of writing a sci-fi novel.

This is the world you live in, after all (at least part-time). It makes sense you’d want to write in it, too.

You’re just not sure where to start — or which science fiction story ideas to explore.

The possibilities are overwhelming. That’s where this list of 61 sci-fi writing prompts comes in.

We’ve divided them into six groups, based on popular sub genres.

Let’s start with what science fiction is in the first place.

Science fiction (often shortened as SF or sci-fi) is a genre of speculative fiction that focuses on the impact of real or imaginary science on its characters.

Most sci-fi stories fit into the following sub-genres:

These stories pull you in because they offer something you don’t get in your real life. At the same time, enough about it feels familiar to make you identify with the main character and see yourself in the story.

Take a look through the sci-fi story starters below to find one that makes you smile. Then write down whatever comes to mind.

1. In your world, you can “reincarnate” into a new, lab-created body. You’re shopping for one, now, and you run across a familiar face with a list of customer reviews.

2. All babies are now temporarily sterilized at birth, but you weren’t born in a government approved hospital. Neither was your new crush.

3. You’re part of a new human-AI hybrid project, and your consciousness is uploaded to a state-of-the-art, ageless synthetic body with memories that aren’t yours.

4. Nanotechnology now allows you to regenerate your entire body, but while you’re regenerating, an enemy hacks into the process and changes the design.

5. A hundred years into the future, the United States has open borders, universal healthcare, and public servants who live up to the name. You were created with one purpose: Tear it all down.

6. A lab-created monster turns a bioengineering firm’s entire workforce into hosts for its spawn. You break in to steal some tech.

7. A new chemical weapon renders your whole special forces team invisible. The only person who can see you is your handler.

8. As the winner of the annual “Evolution Project” lottery, you have the opportunity to receive a genetic “upgrade.” The fine print gives you pause.

9. You’re on a field trip to an intergalactic Disney World, via stargate, when you realize everyone around you is changing into Disney characters.

10. All marriages must now be approved by the government, which also arranges marriages according to a compatibility algorithm you created.

11. You’re a fringe scientist who’s developed a way for anyone to witness scenes from their past lives. A favorite client learns one of her past lives murdered one of yours.

12. Your father is a pariah, having recreated mythological beings. Now, the government wants to weaponize them. Saying no is a declaration of war.

13. In your world, magic and technology work together to create an infrastructure that serves everyone equally. But not everyone is happy.

14. The bees are actually fairies in disguise. Their hidden technology is beyond anything human. And they can convert humans to their cause (and form).

15. The world’s most powerful mage runs the biggest international tech conglomerate, which has been rewriting human DNA, using vulnerable populations.

16. A girl dies and comes back but remains comatose for a year. When she wakes, she begins her physical transformation.

17. You love your smart home, but when your estranged sister comes to visit, she connects with the AI and makes some unpleasant changes.

18. You’ve learned to communicate with ancient beings living in Earth’s core, who can shape-shift. One of them responds to your call for help by appearing in human form.

19. You’re the illegitimate child of a corrupt leader and the most powerful sorceress alive. Your exiled mother’s apprentice offers to help you avenge her.

20. Fringe tech has made it possible for any human to become a shapeshifter. You become a dragon shifter and a member of the security detail for the new president.

21. After a unicorn impales your father, you join an elite team that seeks out dangerous mythical creatures and “harvests” them for science.

22. In your world, all non-magical humans are forcibly married to magical beings. Your ‘match’ is a practicing mage harboring fugitives and growing illegal plants.

41 Of The Best Romance Writing Prompts

23. Couch-surfing as a time-traveler has its downside.

24. You go back in time to stop your mother’s murder and return to find your twin sister dead instead.

25. Your future child pays you a visit and begs you, “Don’t go on the business trip,” without explaining why.

26. You thought you were headed for a nice vacation in Renaissance Italy, but something went wrong, and now you’re stuck in the 1980’s.

27. Your time travel phone runs on carbon dioxide and can connect you to anyone in time and space. Someone out there keeps texting you puns.

28. You finally get what you need to go back in time and protect your country from the pandemic that killed your family. You have nothing left to lose.

29. Your life insurance doesn’t cover time travel mishaps, which is unfortunate, because your time jumps rarely go according to plan.

30. You win an opportunity to go back in time and steer your own life in a different direction. You take it, and things start to look better before it all goes wrong.

31. You’re an adopted child who grew up with abusive parents. You go back in time to make sure you end up with different parents and are surprised by who you become.

32. Time traveling is now illegal, except for a small government agency with an agenda. You discover you can teleport yourself to any point in time and space.

33. While your body remains in one universe, you visit another. In this one, your spouse survived the car crash that left you in your comatose state.

34. In your universe, the other candidate won the election in 2016. You accidentally get stuck in this one.

35. You’re able to find and enter parallel universes where your family survived 9/11. You connect with family on social media, since you have the same login info as their version of you. An online conversation has unexpected consequences.

36. You’re born with the ability to see objects and people from different but connected worlds. You can even reach out and take something, drawing it into your world.

37. “It all started when I had my first taste of alcohol, which turned into too many. I went to use the bathroom and walked into a wasteland — with zero toilets.”

38. You were building a snowman when the tree to your left rippled, and out came a kid your age who had clearly never seen snow before — or other kids.

39. You’re off on a tech-free retreat, and your roommate introduces you to psychedelic mushrooms, which allow you to see another world overlapping your own.

40. You’re a “reality-jumper,” and you meet someone who should be dead in the world you’re visiting, but who was saved by a time-jumper. You’re there to remove her.

41. “This reality doesn’t have donuts. I mean, they’ve never existed! I’m about to change that.”

42. You visit a reality where you stayed single and, in disguise, you spy on that version of you until you accidentally meet. Fortunately the single you doesn’t see past the disguise, but they feel an immediate connection, which creates problems.

43. A creature thought to be extinct (and pre-human) shows up at your back door and communicates with you, ultimately leading you to its damaged spacecraft.

44. Your parents die before they can tell you you’re not from this planet. You find out on your wedding night.

45. You’ve kept your identity as an extraterrestrial secret to protect your family. But now, your alien abilities could save the life of your best friend.

46. Earth has been invaded by many extraterrestrial species and overrun by one of them. The peaceful ones have learned to blend in, but soon they won’t be able to.

47. You fall for an alien who took refuge in your barn during a storm. She tells you something others have hidden from you.

48. An extraterrestrial who escapes from a lab befriends an undocumented teen immigrant separated from his family.

49. You’re on an extraterrestrial research team that comes to Earth and meets the president. “It’s worse than we thought. Earth needs an intervention.”

50. An extraterrestrial comes to your home and sees your grandmother’s shrine to the Virgin Mary. Collapsing, they cry out, “They’re already here!”

51. You invent a food source that satisfies the daily requirements of humans with one bite.

52. An alien civilization wants to trade something of value for it, but one of their own discovers the food has an unintended mind-altering effect on their species.

53. You’re spying on your crush and discover they’re actually an extraterrestrial with a special ability, which allows them to “see” you. Turns out, they always have.

54. You’re chosen for the science team on the newest starship. You connect with the on-board tech and find a virus waiting to cripple the ship on a specific day.

55. Your crew’s mission (on a fixer-upper starship) to an “abandoned” planet leads to a discovery about Earth’s leadership and its endgame.

56. Your spaceship’s radio picks up a distress call from a nearby planet. You investigate and find a resettlement camp for Earth’s “rejects.”

57. You’re the child of an Earth human and a humanoid being from another galaxy; they had you without government permission. Now, you’re searching for their prison on a hidden planet.

58. The government hires you and your ex-con crew to go on a search and rescue mission for a shapeshifting scientist marooned on a nearby planet.

59. On your planet, love is love, and people from all over the galaxy help each other and start families together. You meet with a peace delegation from Earth and recognize their leader, whom you overhear referring to your planet as “Fruitopia.”

60. You’re a space pirate, cruising at top speeds through space and teleporting onto cargo ships to steal from them. You steal a device that allows you to clone yourself, with ridiculous consequences for your crew.

61. You’re the bartender on board the newest starship, and you collect cocktail recipes and ingredients from different worlds. One of these cocktails has a unique effect on humans: it reverses aging by a decade with every ounce.

Now that you’ve looked through this collection of imaginative science fiction writing prompts, which ones grabbed you right away and made you want to add something?

Don’t worry if you’re not sure you can make a novel out of it, or even if you can finish it. Just let yourself have the fun of playing with that idea. Get the words out.

Who knows where it could lead? That’s half the joy of it.

Choose one of these prompts and free-write for at least five minutes. What you write could be the seed for a new bestseller.