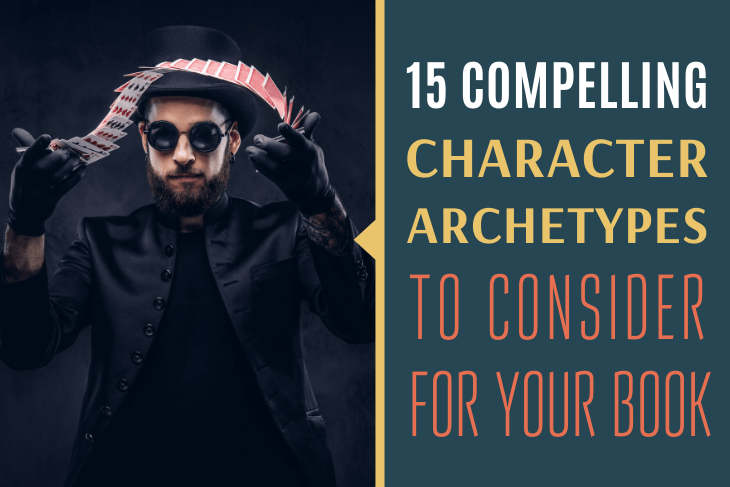 As a writer, you want your characters (especially your protagonist) to resonate with your readers.

They should be larger than life but still believable.

And over centuries of storytelling, archetypal characters have played a larger role than others.

More on that in a bit.

You’ll see the value of his research as you look through the character archetypes list below.

And you’ll see how the skillful use of archetypes is essential to creating unforgettable characters.

What Are Character Archetypes?

According to Jung, archetypes are buried in the human subconscious. We recognize these characters in the stories we enjoy because each archetype reminds us of a unique set of traits common to the universal human experience.

There’s a reason the hero’s journey is foundational to many enduring works of literature. Some challenges and experiences grab our attention more quickly than others.

That said, you already know that just repeating one of these motifs isn’t enough to hold onto a reader’s attention. The writer must find a way to make it new again.

15 Character Archetypes You Must Know

It’s not hard to find lists of 12 character archetypes similar to Jung’s. The number has its own universal significance. Symbolic of perfection or completeness, it represents divine power and authority.

On the other hand, the “angel number” 15 stands for love, education, and innovation — all of which should resonate with you as a writer (particularly one who loves a good story).

Look through these 15 character archetype examples for inspiration.

The human (or humanoid) creator is ahead of their time, building an impressive legacy with each painstaking creation, fueled by imagination and a drive shared by few.

Brilliant but, at times insensitive, they often believe they know what’s best for everyone and forge ahead in pursuit of it without considering other viewpoints. They may also have difficulty communicating their vision or letting others help.

Weaknesses: Difficulty in communicating their vision; Alienating perfectionism; Opposition from competitors or detractors

Desires: To create; To steer their creation toward growth/success; To build a legacy

Whether this is a maternal figure or a trustworthy sidekick, this character thrives on providing exemplary care or service to others. Their self-worth may depend on how the people they care for perceive them.

Many have a history that involves suffering, which has made them compassionate and kind toward others and quick to offer help when needed.

Weaknesses: Overprotective; Coddling; Self-sacrificing to a fault; Needing to be appreciated

Desires: To be loved; To earn trust and respect; To make a positive difference; To atone for something

Fears: Conflict; Failure to do enough; Loss of another’s love, trust, or respect

Examples: Louisa Clark (Me Before You), Agnes Wickfield (in David Copperfield); Samwise Gamgee (The Lord of the Rings)

The child or innocent character is open-hearted and hopeful — quick to trust and to offer kindness. Their naivete makes them vulnerable to predators, and they generally aren’t physically able to defend themselves.

The child often depends on stronger characters for protection and defense. But they, in turn, brighten the worlds and minds of those who come to their aid.

Weaknesses: Naive/Gullible; Unable to defend against predators; Easily preyed upon

Examples: Dorothy from The Wizard of Oz; Pip in Great Expectations; Dora Spenlow in David Copperfield

The outsider is one who doesn’t fit in and knows it. Self-reliant and often slow to trust others, they keep to themselves, by habit, or because they’ve been hurt by people they trusted. They may also be looking for ways to redeem themselves.

No one knows what to expect of the outsider, which is what makes them a wildcard. If someone earns their trust, the outsider may be more open with them.

The warrior is always prepared for battle and always expecting one. That readiness has become part of their identity. They’re hypervigilant and continually training to improve their skills.

They’ve seen others fall, and some abandon the field in cowardice. They know their weakness, and they fear complacency more than death.

Examples: Aragorn (from The Lord of the Rings), Odysseus (Homer’s The Odyssey)

Lovers lead with their hearts and are willing to die for the one they love, even if what they die of is a broken heart

To them, there is no life sadder than one lived without romance and undying love. They’ll risk everything to be with their beloved. They’d rather lose everything than settle for less than their ideal.

Weaknesses: Can lose themselves in the one they love; Hates to be alone; Too eager to please the object of their affection; Selfless to a fault

Desires: To give themselves to another; To keep the romance alive

Want To Write A Murder Mystery? Here’s How

While the seducer has a knack for getting others under their sway, they’re typically loyal to no one but themselves. They enjoy having power over others and use it to their advantage.

Persuasive and cunning, they know just what strings to pull. They’re invariably attractive and charming, possibly thanks to supernatural endowments.

Weaknesses: Self-centered; Amoral or Immoral; Loyal to no one (but themselves)

Desires: Control/Power over others; Using their gifts to get what they want from others

Worst Fear: Loss of control or power over others; Loss of the gifts that make them so effective as a seducer/seductress.

This is the character the hero looks to for guidance on their quest. They often have demons or challenges of their own, but they do their utmost to guide others in the right direction.

If the sage has a fault, it may be pride or an excess of confidence in their knowledge. But what they’ve learned often proves invaluable to those who rely on them.

Weaknesses: Difficulty in solving their own problems; History of mistakes with darker consequences; Pride; Procrastination

Desires: To guide mentees in the best possible direction; To atone for mistakes; To teach the younger generation

Fears: Failure in guiding those who depend on them; Failure to make a positive difference

The joker can be a lot of fun to be around, thanks to their sense of humor. They may or may not have a lighthearted view of life, and some are deep thinkers. But they keep their spirits up and keep people laughing, whatever dangers lie ahead.

No matter what happens to them, they manage to lighten the mood and keep the story’s darker elements from overwhelming the reader.

Weaknesses: Not always reliable; Can be foolish or ridiculous; Distracting

This character is similar to a sage or mentor but typically has a personal agenda. Magicians like to be in control — if not of the universe, then of their world. They have a knack for seeing what others do not.

If they see chaos or thorny problems, they, more than anyone else, know how to fix them. If only others would cooperate with their vision (or at least keep up).

Weaknesses: Proud (hubris); Intolerant of those who disagree (or disobey)

Desires: Power and organization; To fix what is wrong with the world; To restore order, even if it means taking control and limiting others’ freedom

Fears: Loss of power; Loss of control over their world; Chaos

This character is at the top of the hierarchy and wields their power to make things happen, often to their own advantage. They don’t respond well to those who challenge their authority.

They’re slow to trust, paranoid that others are plotting against them. They bear a heavy weight of responsibility for the problems they see in their domain and know the value of trustworthy guidance and intel.

Desires: Keeping the peace; Maintaining power and increasing it; Succeeding in all they do

The rebel refuses to accept life the way it is or the life others want for them. They’ll fight for the right to choose their own path, and they’ll learn (often the hard way) how to do that. They like people, but they’re as resistant to leadership roles as they are to following.

They often challenge authority figures, who see them as troublemakers. Free-spirited and defiant toward those who try to control them, they fight to make the world better.

Desires: Change for the better; Freedom or Independence

Worst Fear: All their efforts coming to nothing or not being enough

The role of the bully is to make the protagonist’s life harder and help develop their character. But the bully character shouldn’t be two-dimensional or stereotypical, either.

They antagonize your main character physically, mentally, or emotionally — often because they’ve been bullied themselves. And who doesn’t love a bully with a redemption arc?

Desires: Power or influence over others; To prove their own worthiness or superiority

Worst Fear: To be exposed for what they are; Exposure of their deepest wound

The hero has a journey to undertake, though they may reject it at first. Typically, a sage or mentor awakens them to the quest’s importance and the danger presented by the antagonist.

Heroes are morally strong and often physically strong, too. They may have unique advantages that help them not only survive but to win the final battle. Frodo had Sam.

Weaknesses: Fear of failure; Tendency to think they have to do the work alone (to keep others out of harm’s way)

Desires: To defeat the antagonist and gain something precious for their people

Fears: Failing their friends; Dying to no purpose

Examples: Frodo (The Lord of the Rings), Harry Potter, Marvel and DC superheroes

This is the most centered of all the archetypal characters: a little of you, a bit of me, and content to be ordinary, as long as they have everything they need.

Their desire for acceptance and belonging can cause them to try too hard to be everything to everyone. They’ve likely undergone some hardship or trauma, so security is essential to them. But they’ll risk it all to help a friend.

Desires: To be accepted; To belong; To fulfill the quest, whatever the consequences (of which they’re more keenly aware than most)

Fears: Losing a friend; Rejection or Abandonment; Failing their friends

Have you found the character archetypes for your book?

Now that you’ve looked through 15 of the most compelling character archetypes, do you have a favorite? If you’re working on a story right now, which archetypes come the closest to your main character?

Maybe you’ve avoided any kind of “type” out of fear of creating a “stock character” or a cliché. But it won’t be if you find a way to make each character their own person.

May you enjoy choosing the best archetypes and creating memorable leading characters. Add a twist your readers won’t expect, and they’ll keep coming back for more.