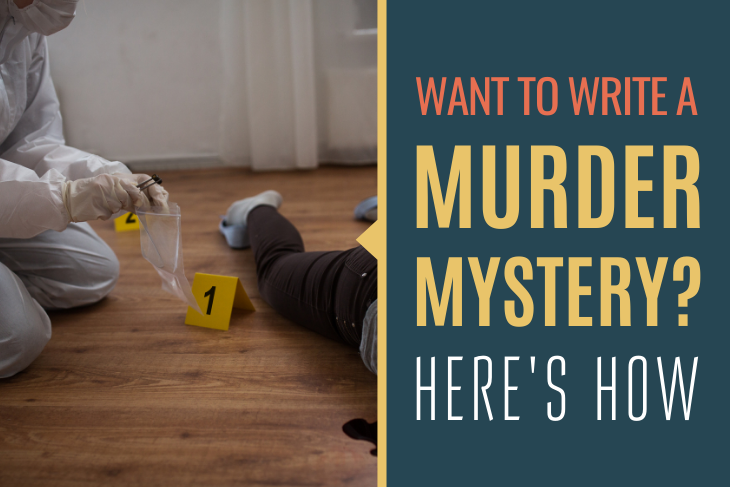 And with all the subgenres, you have loads of opportunities and choices when writing a murder mystery.

Although there’s room for a LOT of variety in this genre, the overall structure is pretty consistent.

In this guide on how to write a murder mystery, we’ll show you what makes mystery a great choice for your first debut as a fiction author — especially if you enjoy reading and watching them.

You probably have your favorites, too. And the more you learn about how to write mystery, the better sense you’ll have of which subgenre you want to focus on.

Let’s cover the basics before we get down to business.

Writing a murder mystery can be just as fun as reading one. Sometimes, it’s even more fun.

Sure, it’s more work. It’s on you to make sure the reader doesn’t regret buying your novel instead of someone else’s.

And there’s plenty of work involved in not only writing your mystery but also editing and revising it — not to mention everything you’ll do to get it ready for publication.

But when you’re done, and your first reader tells you, “You kept me guessing until the very end! I LOVED this story! This is the first of a series, right? … Right??” you’ll know it was worth it.

And the more you learn how to get that kind of response from a reader, the more fun you’ll have cranking out one murder mystery after another.

How to Write a Murder Mystery

What makes mysteries such an ideal genre for new fiction writers is its predictable (but highly customizable) overall storyline sequence:

The particulars of your murder mystery storyline will depend on your book’s subgenre. And there are quite a few. Here’s just a sampling from a long list of subgenres at WritersDigest.com.

Once you know your story’s structure and key moments, you can draft a rough outline.

From there, you can either flesh it out with more detail — for your characters, clues, red herrings, etc. — or use it to launch right into writing your first chapter.

The following questions can help you create a motivating story outline:

After answering these questions, you’ll have a pretty good idea of what happens in your story. An outline helps keep everything sorted by providing a timeline for all the key moments and clues in your story.

It’s up to you whether you want your chapters to have titles related to their content.

Some authors enjoy crafting chapter titles that tease the reader. Others simply number their chapters and rely on tantalizing hooks at each chapter’s end.

If you have to choose one or the other, though, definitely hook your reader at each chapter’s end. You want them to feel conflicted about putting your book down — even when they have to. Give them a reason to come back.

Make it easier to include these hooks by writing an outline like the following for each chapter:

In other words, lead your reader through the chapter with moments that make it worth their while to keep reading. Make them care about what’s happening with the mystery and with your main character’s life and relationships.

Spell it out in moments. And put those in your outline.

The basic mystery plot follows the overall storyline mentioned above but each story fills in the blanks differently — based in part on your subgenre and in larger part on your specific story and its characters.

As a murder mystery author, you want to keep your readers guessing about the murderer’s identity without straying from the basic murder mystery story structure.

Keep their interest with something familiar (the story structure they’ve come to expect) along with something new and captivating. Entice them with the promise of surprising revelations. Give them a reason to care about your story’s characters.

Get them asking the following questions (or some variation thereof):

These will also depend on your chosen subgenre. For example, if you’re writing a cozy mystery, your main character will probably be a female amateur sleuth who runs a shop or eatery of some kind.

She’ll often have a best friend who helps her with her sleuthing. And more often than not, there’ll also be a love interest who either helps her solve mysteries or tries to curb her sleuthing ways.

If you’re writing a classic whodunnit or detective mystery, your main character will probably be a seasoned detective adept at noticing things other people miss or disregard. This detective will probably have a sidekick, who may or may not have a life of their own.

To learn more about the kinds of characters and character types typical to each subgenre, you’ll want to read many by different authors. Once you have the basics down, you can add your own flavor to each character and each relationship.

This works well with fantasy novels. With a murder mystery, though, it’s easier to think of the story in three acts:

Mysteries tend to be shorter, anyway — with a lot happening in each chapter. Mystery readers generally want something fast-paced. And the three-act story structure helps with this.

In Plot Point #1, your main character engages with the inciting incident — which is the catalyst launching them into the story’s main conflict.

At the Midpoint in Act 2, something happens that leads your character inexorably toward plot point #2. The midpoint often involves a disaster of some kind. It’s not the climax, but it does get things rolling more quickly.

At Plot Point #2, your main character is at a low point — thanks mostly to the disaster at the midpoint.

Maybe they thought they’d discovered the killer. But when they followed a lead, hoping for success and satisfaction, it led instead to humiliation and disappointment.

All is not lost, though. Give them time to reflect on how things went wrong. Then give them a reason to pivot and head in a new direction.

Act 3 starts with the inevitable confrontation between your main character and the murderer/antagonist. This is the Pre-Climax, and from here things move very quickly toward the Climax.

The Climax, of course, is where your main character/sleuth narrowly escapes becoming the murderer’s next victim. At the climax’s end, the murderer is caught — or stopped (with some degree of finality).

The Resolution is where you tie up the loose ends and show how the case and your main character’s actions have affected them and everyone else in the story.

99 Positive Words That Start With E To Describe A Person

6 Rules For Double Consonant Words Every Writer Should Know

It’s important that your reader has access to all the clues your sleuth has.

If they suddenly reveal the name of the killer and only then mention the clues they found that were never mentioned before, your reader will feel cheated of the chance to deduce the murderer’s identity themselves.

Mystery readers like to be involved in the sleuthing. Keep them in the loop.

If you write a detailed outline before starting your first draft, you can plug in your murder mystery clues — what they are, who will find them (first) and where, and how your characters interpret them.

Having these details already in your outline can give you the confidence to get started writing your first chapter.

It doesn’t mean those details won’t change. A lot can happen when you’re writing, and often the ideas you get when you’re in a flow state are better than the ones you had when you were brainstorming.

That said, some writers (those who lean more heavily toward the pantser end of the author spectrum) do better with a rough outline so they can add clues and other details as they write their draft.

You know your process better than I do. Do what works for you.

But if you get stuck, sometimes brainstorming with an outline or voice-journaling for your main character will help you get unstuck.

And sometimes a shower or a long walk can do what sitting at your desk cannot. Just like clues, sometimes you find inspiration when you’re not looking for it.

If you sat down with a group of murder mystery authors and asked them for their best tips on writing for this genre, you’d likely end up with a list like this one:

Make your main character someone your readers will root for.
Get your timeline right (especially in the discovery of the body).
Know the expectations that go with your subgenre.
Leave several clues to your murderer’s identity (but don’t make them too obvious).
Use red herrings — but don’t use them to cheat your reader.
Don’t go overboard with murder suspects (or red herrings).
Make sure your murderer’s motives are believable.
Give your suspect truths to tell as well as lies (i.e., make them human).
Consider using an unreliable witness (for your red herring).
Give your sleuth a life beyond the mystery they have to solve.
Do your readers a solid and tie up those loose ends.

Ready to write your murder mystery?

Now that you know how to write a murder mystery, what ideas are percolating in that creative mind of yours? What characters are just begging you to bring them to life on the page?

A year from now, you could be working on the next installment in your bestselling murder mystery series, thrilled by the response of readers all around the world.

Where will it all begin? And how can I help you earn a good living writing murder mysteries? Because it can be done.

Check out other Authority Pub articles (like this one on writing dialogue) to get closer to your goal of becoming a bestselling author.

May this be the first of many bestselling novels with your name on the cover.