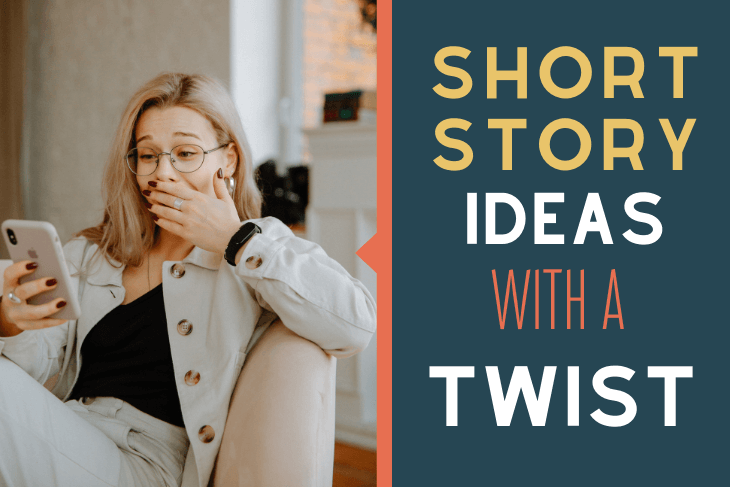 Just when you think you know what’s coming…

A devastating secret or unknown danger comes to light.

The way forward is no longer clear.

The stakes have gone up.

Or maybe the twist comes when things look darkest.

Suddenly it seems possible (though not at all certain) that our hero might triumph.

Creating good plot twists is an art form in itself.

So, how do you create your own?

What’s In This Article?

What Makes a Good Twist for a Story?

One of the best things about reading a well-crafted plot twist is being able to tell yourself, “Aha! I knew it wouldn’t be that easy….” or “Oh, wow! I knew something was coming, but not that!”

It feels like you and the narrator have had a moment. And with the big reveal, they wink in your direction as if to say, “I know you felt a twist coming. Good instincts. High-five!”

So, how do you create a plot twist with that kind of power?

How Do You Write a Twist Short Story?

Effective twists have the following in common:

Stage-setting can include foreshadowing, which leads to that “aha!” moment you want your reader to have. To them, it feels like a reward for noticing something that, when they read it, felt like a minor but vaguely important detail.

On some level, they knew it meant something.

As you read the short story twist examples in the list below, keep in mind these ideas are just the skeleton of the story. They tell you what happens. But only you can make it worth your reader’s time.

57 Short Story Ideas with a Twist

Some (even many) of the plot twist ideas in the list below will probably sound familiar because they use popular tropes. But like even the most well-loved tropes, they can only tell you what happens in the story.

1. A teenager uses magic to help his crush win a competition when he suspects someone of sabotaging her. The suspect knows something he doesn’t.

2. You’ve won an award for your giant pumpkin, but then you learn the surprising secret behind its unusual growth.

3. You wake up able to understand your cat and eventually realize you’ve been turned into one.

4. One Christmas, you pretend Santa is real for your nephew, who believes. It turns out he’s right to believe.

5. You wake up to a completely different life and realize the life you knew was an illusion created by your parents.

6. Your birthday wish comes true and wreaks havoc. And your nightmare becomes your only hope of survival.

7. You have a knack for magic tricks that backfire in spectacular fashion. Today’s birthday surprise is only slightly different.

8. The new student your hero befriends turns out to be their missing cat, which explains the attitude.

9. You find a work-from-home roommate who’s tidy,  considerate, responsible, and a fantastic cook. Then the neighbors start disappearing.

10. You invent a beverage that eliminates the need for sleep, with a side effect that seems manageable at first.

11. You create a successful hybrid of two beloved houseplants, only to discover its blooms have a distinct and overpowering scent.

12. The story begins with the protagonist asking someone, “What are you doing in my house?” It ends with the other character asking the same question.

13. The hero finally locates the perfect anniversary gift for their partner—one that reveals they knew about their partner’s murder attempt.

14. A blind teenager has a gift for drawing faces based on witness descriptions. Her latest drawing looks exactly like her mother.

15. You’re raised to believe an alien race is hunting you. Eventually, you learn they’re trying to rescue you—from your “family.”

16. You have no idea why you woke up in a forest until you become the center of a murder investigation.

17. You befriend a killer’s last would-be victim, only to discover they’ve been the killer all along. And you’re the endgame.

18. The city’s new gardener has a secret, which she reveals when her finished garden opens to the public.

19. The next-door neighbors moved in during the night, and they practically live in the backyard pool. Your mc discovers why.

20. Your new coworker is always bringing you fresh coffee. Then, one morning, you wake up married to them.

21. A couple learns their adopted daughter has a twin with dangerous gifts. The twins eventually meet, and truths come out.

22. A wolf shifter marks the home of his “future mate,” not realizing she has no idea she’s a wolf.

23. An intergalactic explorer is rescued by aliens who warn them about Earth: a toxic wasteland with few humans left.

24. Aliens find a spaceship with an abandoned child; little by little, they mine her memories to reveal a devastating truth.

25. The main character (mc) is convinced they’ve attained their success without anyone’s help, but a new friend slowly reveals the humbling truth.

26. A dreaded break-up goes surprisingly well, and you pursue a sudden and irresistible opportunity, not knowing who’s behind it.

27. The hero saves the life of their crush using magic without realizing they were noticed by someone who has a crush on them.

28. The hero’s gift turns people into supersoldiers, giving Earth an advantage and turning people into the creatures they’re fighting.

29. The hero wakes up in the care of a nation’s leader and becomes their closest ally until they learn the truth.

30. The hero takes pride in their skill at hunting demons until they learn the truth about their own parentage.

31. The hero makes an example of a school bully—only to find out the real threat is the friend he was protecting.

32. The hero is a highly-skilled hacker whose skills avert a global crisis and whose reward looks a lot like punishment.

33. The hero’s parents have kept a secret; to save his life, they’ll have to tell someone who wants him dead.

34. The hero is a dragon shifter whose twin has an agenda: be fruitful and multiply, starting with the hero’s girlfriend.

35. Your hero receives a magical book and discovers why they have a knack for it—and what it will cost.

36. You receive an heirloom that is supposed to reveal your sacred gift at midnight. You are your family’s doom.

38. A family of heroes fosters a teenager, who happens to be a vigilante currently foiling all of their plans.

39. The queen bee at your hero’s school just happens to be their mother, who became a vampire after a difficult childbirth.

40. The hero is determined to win a chance at courting the princess. He knows something the other contestants do not.

41. The heroine is determined to run away when a new servant divulges a secret about her royal parents.

42. Overnight, the richest kingdom on earth becomes a haven for every species but humans. Only the cats know why.

43. Your adoptive parents have always avoided talking about your birth mother. In the end, you find out why.

44. A picture of your parents drives you to end a relationship, only to learn the real reason behind your reaction.

45. A successful author of paranormal erotica uses a pen name; a woman with that name claims the rights to her stories.

46. Your “hero” is constantly cleaning up after an elusive bad guy, but a surprise clue points to the hero’s fianceé.

47. Thanks to a rare (dissociative) personality disorder, your hero is constantly receiving anonymous gifts. They suspect an ex-girlfriend.

48. Only when the pregnant hero’s husband walks out of the delivery room does she learn a devastating secret.

49. Your hero-narrator’s chemically-induced dreams come true, which benefits everyone until someone changes the chemicals. It’s the hero.

50. You’re about to marry the world-famous inventor of AI companions when you learn why you’ve never seen them asleep.

51. Your BFF’s secret novel project is a huge success, but they swear you to secrecy about it. You learn why.

52. A couple whose five-year-old son was kidnapped later adopts a teenager who believes he was “rescued” at age five. He’s not wrong.

53. One pandemic survivor becomes a surrogate mother for a ruling family—until they learn the virus was of alien origin.

54. When the mc’s best friend from childhood volunteers to donate a life-saving kidney, both learn they have the same father.

55. A successful and single billionaire spends a fortune to keep a love-child secret, but the billionaire’s dying mother finds out.

56. The mc’s favorite teacher, who’s just been fired, turns out to be their birth mother.

57. Your roommate writes bestselling novels every month. You coerce them into revealing their secret; it’s you who’ve written the stories.

Now that you’ve looked through all 57 plot twist ideas, which ones jumped out at you? Which one has you itching to jot down some ideas. And where will those lead you today?