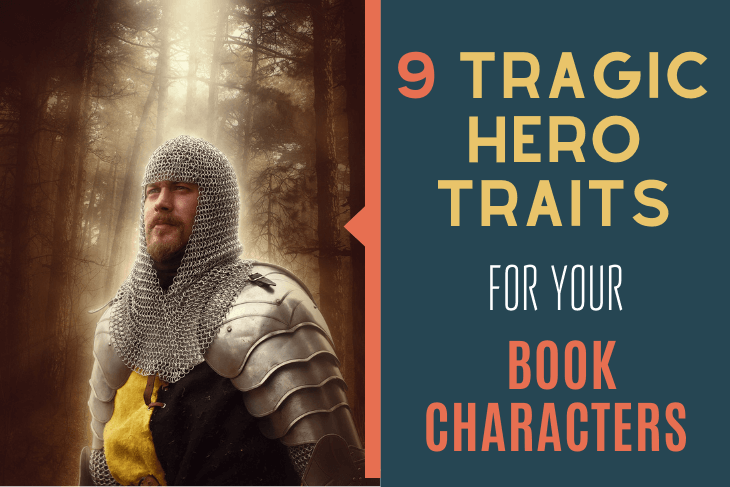 You’ve read enough stories to know how compelling tragic heroes can be.

And you have ideas for one of your own.

You just need to know what traits will make them irresistible to your readers.

Welcome to the ultimate guide to tragic hero characteristics.

From Aristotle’s tragic hero to your newest character inspiration, you’ll learn everything you need to know about the universal (or generally agreed upon) traits of a tragic hero.

What Is a Tragic Hero?

Aristotle defined the tragic hero character as a generally virtuous person with a fatal flaw who commits a grave error in judgment and pays dearly for it.

As you’ll soon see with the characteristics of a tragic hero, there’s plenty of room for a variety of personalities and backstories. Some you’ll probably find more compelling than others, simply because the character’s story resonates with you.

Ask yourself if you’d make the same choice—and why (or why not)?

Tragic heroes share key traits related to their personality and behavior. Read through the nine we’ve described below, and make a note of how you might apply them to your own tragic character.

1. They’re usually not the worst.

The tragic hero is generally likable and motivated to do the right thing. We find it easy to identify with them, often because we see everything from their perspective.

We feel we know them on a deeper level than we know other characters. If we’re in their heads, we find it harder, as we go along, to separate their thoughts from our own.

The more we get to know them and the thinking behind their actions, the easier it is to justify those actions or at least to understand the characters and want everything to somehow work out for them.

Example:  Cinna — Katniss Everdeen’s stylist during her campaigns from The Hunger Games by Suzanne Collins

They have a lot going for them. At the outset, at least, it sure looks as though this character could write their own ticket. They have options.

Maybe they haven’t always had it this good, but when we meet them, they’re in a pretty good place. And for some reason, we suspect that won’t last.

Example: Anakin Skywalker — A force-sensitive human male who was a Jedi Knight of the Galactic Republic from Star Wars by George Lucas

Often enough, that fatal flaw is rooted in hubris or “excessive pride.” The flaw is stubbornness with some characters; with others, it’s fear of humiliation or change.

Whatever the specific flaw, this character feels compelled to make sure things turn out a certain way—for their own benefit or that of someone important to them. And they’re willing to do whatever it takes.

They can’t see past their own skewed perception of themselves or the people around them. And they draw from that limited perception when the moment of decision comes.

Example:  Eddard Stark — He is also called “Ned,” is the head of House Stark, Lord of Winterfell, and Warden of the North from A Game of Thrones by George R.R. Martin

4. Their fatal flaw leads to a serious error in judgment (“Hamartia”)

This is the choice that changes everything for the tragic hero. They typically don’t realize the error when they make it. Often, too, the farther they go down that road, the harder it is to see a way out that doesn’t involve another fatal mistake.

As the audience, we can see the mistake for what it is, and we know retribution is coming.

We want this character to see that and to do what they can to reverse course. But time and again, we see them double down on their mistake because they see no other way.

Example:  Macbeth — A brave Scottish general who receives a prophecy that one day he will become King of Scotland, from Macbeth by William Shakespeare

Something about this character keeps us coming back to see what they’ll do next and how things will play out for them even when we’re angry with them.

Despite their serious errors in judgment and their apparent inability to see how they’re in the wrong (in the moment, at least), we don’t want a vengeful enemy to corner them and end their story suddenly.

We want an ending as epic as the character.

Example: Joe Goldberg —a serial killer, stalker, and former bookstore manager obsessed with a woman from You (TV series)

6. They suffer a dramatic reversal of fortune (“Peripeteia”)

That’s a pretty word for a generally unpleasant reversal of fortune for our tragic hero, thanks to their aforementioned error in judgment.

Whereas before their epic mistake, life was going pretty well for them, their post-mistake life starts to look different, especially as the consequences of that mistake catch up to them. They stand to lose everything and everyone that matters to them.

And they might just do something drastic to hold onto what they still have.

Example:  Dorian Gray —a man that sells his soul for eternal youth,  from The Picture of Dorian Gray by Oscar Wilde

Eventually, the tragic hero realizes they’re responsible for all the bad things happening on the heels of their decision.

At that point, they may resolve to do things differently. If they need a clean break from the world they’ve broken and a fresh start somewhere else, they’ll do whatever’s necessary to get that—a blank slate with a renewed hope that “this time, things will be different.”

But they can’t escape their past for long. And when it finds them, they’re less surprised than disappointed (or relieved).

Example: Severus Snape —a mysterious and unforgiving figure who has deep emotions and anguish, from the Harry Potter series by J.K. Rowling

25 Of The Best Fanfiction Writing Prompts

This nemesis could be an actual person who’s motivated to protect those they care about from the tragic hero’s gravitational pull. Or it could just be the dire and unavoidable consequences of the tragic hero’s regrettable actions.

It’s all part of what makes the tragic hero a cautionary tale—not someone to emulate. And yet, part of us still wants some redemption for the character. We don’t hate them.

And while we know their ending won’t be a happy one, we want it to make sense.

9. Their self-inflicted misery creates catharsis in the audience.

Art that is cathartic causes a release of pent-up emotion in the audience, who identifies with the tragic hero and feels badly for them.

The catharsis is especially strong when the tragic hero’s fate is worse than they deserve.  Part of the tragedy is the excessive nature of those consequences.

Because, knowing what this character has been through, we want to see a path to their redemption, even when they just keep digging a deeper hole for themselves.

Example: Randle McMurphy — a brawler found guilty of battery, gambling, and statutory rape who declares himself insane, from  One Flew Over the Cuckoo’s Nest by Ken Kasey

Joe Goldberg is not the only tragic hero who captures the sympathy of his audience. How many of the following examples of literary (and cinematic) tragic heroes have you met?

Now that you’ve looked through the most notable qualities of tragic heroes, which ones remind you of a character you’ve created — or one you have in mind? And what ideas will you play with today?