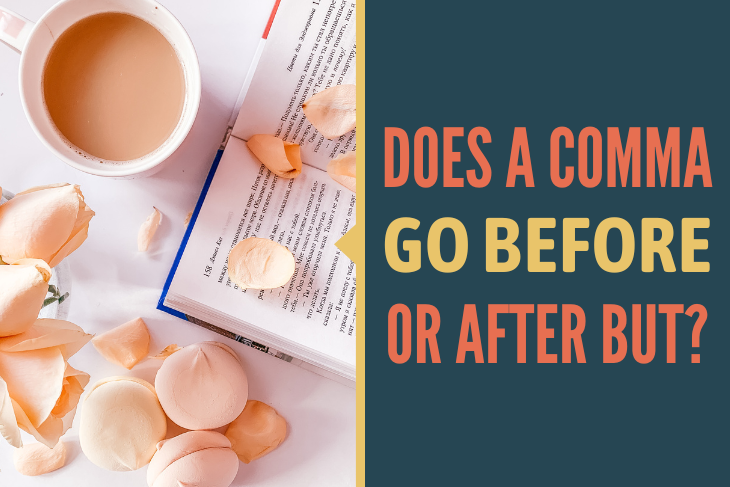 If this post’s title brought back memories of heated arguments over the Oxford comma, no worries. This is a comma-friendly space.

Commas make whatever you write easier to read by inserting pauses and setting things apart.

They help make each sentence sound in the reader’s head the way it sounds in yours.

But one question keeps popping up: “Does the comma go before or after but?”

You wouldn’t think “but comma rules” would be a thing, but one rule doesn’t fit all the possible situations involving commas and conjunctions.

Fortunately, there’s an easy way to sort it all out.

You’re not the only writer who’s gotten confused over the use of commas with conjunctions. It helps to know when you need them and where they should go.

This post answers both questions, so you can get back to writing with confidence.

Rules for commas aren’t supposed to be complicated, after all. The aim here is to show their simplicity and make it clear how and when to use them.

When do you put a comma before but?

The comma goes before but when we’re joining two independent clauses.

Independent clauses are those that can stand alone. Every independent clause has a subject and a verb. The two clauses joined in the above examples could be separated to create two complete sentences.

Dependent clauses, on the other hand, cannot stand alone as complete sentences because they don’t have a subject noun, as you’ll see in the next examples. When you join an independent clause with a dependent one, you don’t need a comma.

If you replaced the comma and the word “but” with a period, you would not have two complete sentences.

Since they can’t stand alone, you don’t need a comma to join them to the independent clause. The conjunction itself is enough.

More Examples of Commas Before Conjunctions

The word but isn’t the only conjunction that gets a comma before it when it joins two independent clauses. With “and” and “or,” the same rules apply, as you’ll see in the following examples:

Metaphor, Simile, And Analogy: Everything You Need to Know

31 Ridiculously Simple Tips For Writing Your Next Book

When is it okay to omit the comma between independent clauses?

If the independent clauses are very short and simple, it’s okay to leave the comma out.

While commas aren’t required here, adding them doesn’t make the sentence incorrect. If you want that implied pause to break up the sentence, throw it in. If you don’t feel you need it, leave it out.

When To Use A Comma After But

The only time you’ll need a comma after but is when you add an “interrupter” right after it. These break up the sentence to create emphasis or to show emotion or tone.

Take them out, and the meaning of your sentence doesn’t change. Here are some examples:

Every interrupter is set off with commas, whether it comes after “or,” “but,” or “and.” Try reading these clauses without them.

With shorter clauses, you might not get confused as to its meaning. But commas force the reader to pause just enough to make your sentence and its meaning clearer.

In this and other cases, commas that set things off help the reader recognize content that isn’t essential to a sentence’s meaning.

Now that you have a better understanding of the rules about commas and conjunctions (and, or, and but), you can use them with confidence.

And if anyone asks for clarification, you can help them understand better, too.

Will we always use commas to separate two independent clauses? No idea. Grammar rules can change if modern usage normalizes breaking them. Think of how often you run across sentences that end in a preposition.

But punctuation rules are different. And commas are there to improve clarity and flow. May your sentences be shining examples of both.