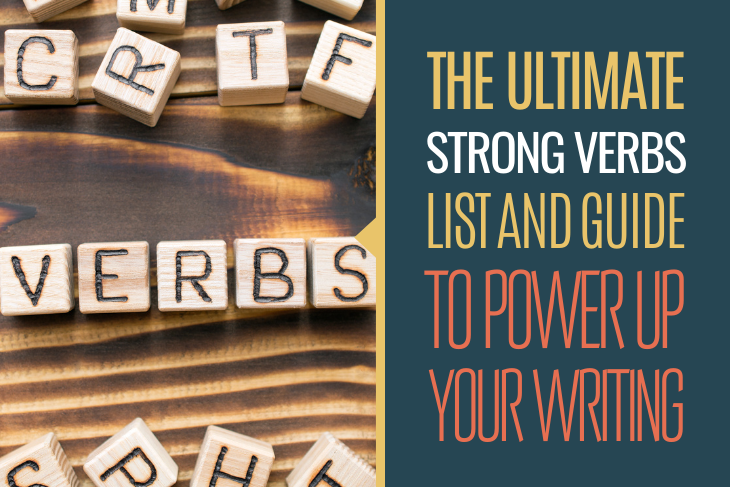 Why should it matter so much whether your verbs are strong or weak?

And how do you even know if you’re using weak verbs?

If you know the answer to the question, “What is a verb?” and if you enjoy reading, it won’t take long to answer the bigger question of how to replace weak verbs with strong ones.

Because you know the purpose of the verb isn’t just to give you a pencil tracing of what’s going on.

It’s supposed to show you as much as possible with an economy of words.

This is why adverbs get so little love from writers nowadays.

They try to compensate for the inadequacies of weak verbs, but all they end up doing is making the sentence harder to read (without cringing).

Who knew there were two types of verbs, anyway, though?

Don’t all verbs basically do the same thing?

Well, yes and no.

Weak verbs can tell your reader what’s happening, but only strong verbs can catapult them right into the action.

Want to know how? Of course, you do!

What writer doesn’t want to master the art of captivating their readers with strong, evocative language?

And to help you do this, we’ve included a strong verbs list, which you can draw from to turn a basic narration into a full-color IMAX in-house movie.

But how do you tell a weak verb from a strong one?

What Are Strong Verbs

Strong verbs are the best verbs for a specific context because they do the following:

They stand out as both unusual (or unexpected) and appropriate.
They paint a specific picture of what’s going on — creating a stronger visual.
They evoke an emotional response in the reader.

The strongest verb is the one that communicates exactly what someone is doing and how they are doing it — without any need for an adverb.

By contrast, the weakest verb is the easiest one to use, and it communicates as little as possible while giving you the basic idea of what’s going on.

Sometimes, a weak verb is the one to use, but if all or most of your verbs are weak, your writing will be dull and lifeless. It won’t paint a clear picture, and it won’t evoke an emotional response.

And it’s way too easy to put down.

While strong verbs are specific, weak verbs are general.

For example, you can say someone ran down the hallway, and that gives you the basic idea of what’s happening, but it’s also bland.

But if you say he bolted down the hallway, you communicate more of the urgency or even panic behind it.

You show the reader some of the emotion behind the action. Weak or “basic” verbs don’t do that.

When you use weak verbs like “ran” or “walked” or “smiled,” it’s tempting to use an adverb or a clichéd adverbial phrase to make the verb sound more interesting by telling the reader how the subject is doing something.

He ran like a cheetah.
He ran frantically.
She smiled
She smiled from ear to ear.

The adverbs don’t really make the verb more compelling. They add detail but without making the action feel more real.

Or if the reader already knows the why, the word “bolted” is more satisfying than simply “ran.”

As the more appropriate verb, it feels more like the appropriate response to the danger at hand, and it leads the reader deeper into the story.

Strong verbs paint clearer and more vivid images in the reader’s mind, making them care more about what will happen next. They add an extra dimension to the character taking action.

How easy is it, though, to replace your weak verbs with strong ones?

Replacing To Be Verbs

Weak verbs are everywhere because they’re easy to use.

If there was a supermarket for verbs, the weak ones would be at eye-level and right across from the ice cream freezer. We’re only human.

The weakest of the weak verbs are “to be” verbs (also called simply “be verbs”). They’re not evil incarnate, though. and there are times when they’re the best words to use.

If you can say the same thing with a strong verb — in a way that doesn’t sound like you’re forcing it in there — go with it. But don’t try to make every verb a strong one.

No one wants to read something that sounds like the writer swallowed a thesaurus and chased it with some ipecac, but try to mix it up as much as you can.

When your reader’s attention is at stake, it’s worth it to find verbs that will get the response you want.

It’s also worth changing combinations like the following to eliminate the extra “to be” verb:

These verbs are used alone and as part of compound verbs like “are used” and “has been scared.”

If you’re yawning right now, you’re not alone. While there’s definitely a place for “to be verbs,” don’t let them do all the work.

Don’t beat yourself up, though, if you look through something you’ve written and you find that most of your verbs (or even all of them) are weak verbs. As I mentioned earlier, they’re low-hanging fruit. We all use them.

If you’re not already familiar with the “to be” verbs, here’s a list:

We’ve broken the following list of strong verbs into subsets to help you more quickly find the strong verb with the exact quality you want — from vivid to forceful to fun.

Verbs do have a tone, and even verbs that mean generally the same thing won’t work equally well in the same context.

If your character is having a nighttime phone conversation within earshot of her sleeping captors, you’ll want to avoid dialogue tags with verbs like “broadcasted,” “blabbered,” or “announced.”

The thesaurus does open the door to a whole new universe of more evocative verbs, though, and the lists below give you a taste.

Part of what makes the verb appropriate, though, is the sound it makes and how it affects the rhythm of your sentence.

So, read the word aloud in the context of your sentence and make sure it reads easily, sounds like it belongs there, and creates the right visual effect.

The same verb can belong to multiple categories, based on the impact you want to make and on the mood you’re in as you read this.

Take a slow read through the lists that follow and take note of the ones that stand out for you.

If you’re rereading one of your sentences and feeling the need for a more powerful verb — one that grabs the reader’s attention and leaves them in no doubt as to your meaning — see if one of the following verbs are a better fit.

Maybe they’ll at least get your mind so in tune with powerful verbs that you have an easier time thinking of just the right one.

31 Ridiculously Simple Tips For Writing Your Next Book

Grammarly Review: Is This the Best Grammar Checker?

Some verbs just don’t create a vivid enough picture for your reader. You want a verb with visuals that pop in your reader’s mind.

The following should give you some ideas.

If you’re looking for a verb with a strong and undeniable presence — one that gets the message across with a one-two punch and without apologies — consider the verbs in this list.

Maybe you just want a verb that sounds more interesting than your original choice — but without sounding forced or flowery.

You don’t want purple prose, but you do want to keep your reader interested. So, mix it up with one of the dazzling verbs below.

Some verbs are just more fun than others. It’s not a competition; it’s just how it is.

Some verbs get all the oohs and ahhs but none of the laughs. They’re cool with it. They know their place.

The following should give you some ideas.

Some verbs just do a better job of describing how a character is doing something.

It paints a clearer picture, so the reader is better able to visualize what’s going on.

These might not be the most vivid verbs, but they do show you more detail than your average “basic” verb.

You’ll find some of these in the other lists, but it makes sense to gather up other ways to say “said” into a list of their own.

Sometimes, “said” is just fine. But if you’re using a lot of dialogue tags, and you’d like to show a little more of how your character is saying something (with making things awkward), a list of strong “said” verbs will come in mighty handy.

Don’t overdo them, though. And if you can indicate who’s speaking without using a dialogue tag at all, so much the better.

The following verbs are also helpful in other contexts where you might use the word “said.”

Side Note: I’m omitting the word “exclaimed” on purpose; the word is overused and pure torture to read.

With strong action verbs, you can almost physically feel their impact. You should also be able to picture the action each word represents. Look through the following list and see what visuals and sounds come to mind.

Now that you have a fair sampling of strong verbs to choose from, we hope you keep this post handy, and that it serves you well.

Remember that it’s not so much a question of good verbs vs. bad verbs.

The weakness of a “to be” verb or a general verb doesn’t make it bad; it just makes it less communicative. It has less of an impact than a strong verb.

But as we mentioned before, sometimes a weak verb is honestly the best fit. Think of dialogue, for example. How many people do you know who always use strong verbs in every spoken sentence?

I don’t know any. And that’s okay. Sometimes, phrases using weak verbs — like “Need more coffee” — say everything you need to say. So, no verb shaming allowed.

May your ingenuity and compassion influence everything you do today.