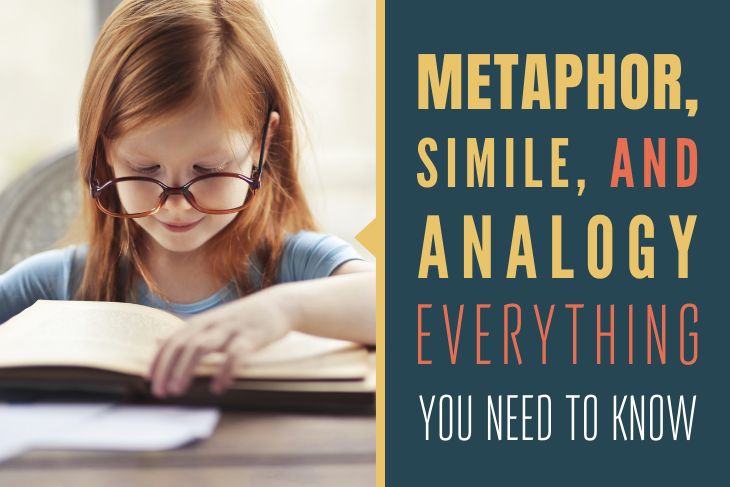 You learned about figurative language in grade school, and you remember the words metaphor and simile — but you’re not sure you remember what they are and how one is different from the other.

And then someone uses the word “analogy,” and you’re officially confused.

You know they have something to do with logic, but what does that have to do with metaphors and similes.

Good thing you found this article.

Turns out, they are related; they all compare things. But each one does the job differently.

So, the next time you want to compare two different things or ideas in a new, thought-provoking way, which figure of speech should you use?

And what makes each one different from the other two?

What is a metaphor?

A metaphor is a rhetorical construction that uses one thing to mean another. The point is to get the reader looking at something in a different way.

It calls one thing by the name of another different thing, and both things have something in common that makes the identity swap work — but only figuratively.

The words “love is a battlefield” don’t actually mean there are literal guns and other weapons involved.

Here are some other metaphor examples:

“The moon was a ghostly galleon tossed upon cloudy seas.” — The Highwayman, Alfred Noyes
“Failure is the condiment that gives success its flavor.” — Truman Capote
“Happiness is the china shop; love is the bull.” — H.L. Mencken

A metaphor could be expressed simply as “A is B.”

What is an analogy?

An analogy is a rhetorical comparison of two different ideas or things that are similar in some way.

It can use a simile or a metaphor as its launchpad and continue with an explanation of what the two ideas or things have in common.

It can also exploit that similarity to explain something difficult to understand or too delicate to discuss openly in polite company.

One analogy example begins with the simile, “Politicians are like diapers,” and continues with an explanation of how the two are similar.

Analogies like the ones used in the American SAT test (among others) use the following formula, expressed with words or symbols:

So, an example of an incomplete analogy would read like the following:

Since we know the relationship between the first pair of words, we can fill in the blank with Roman Catholicism to complete the analogy.

What does simile mean?

A simile is a literary device that directly compares two things using the word “like” or “as” to link them.

Any simile definition will bring this up since it’s the key thing that distinguishes a simile from a metaphor.

Here are some examples of similes:

“She sat like Patience on a Monument, smiling at Grief.” — Twelfth Night, William Shakespeare
“Hills like White Elephants” —title of a short story by Ernest Hemingway
“A room without books is like a body without a soul.” — Marcus Tullius Cicero

Metaphor, Simile, and Analogy: Everything You Need to Know With Examples

Difference between Metaphor and Simile

It’s not so much a case of metaphor vs simile since a simile is actually a type of metaphor. So, technically, all similes are metaphors, but not all metaphors are similes.

The key thing that determines which word we use is the simile’s use of “like” or “as” to compare two things.

Grammarly Review: Is This the Best Grammar Checker?

Difference between Analogy and Metaphor

While a metaphor implicitly compares two things — equating one thing to another because of something they have in common — an analogy holds two things parallel to each other to point out and make use of similarities between the two.

A metaphor is a simpler construction and can usually be expressed in one sentence, whereas a fully developed analogy can take several.

Difference between Analogy and Simile

A simile is a figure of speech, while an analogy is a type of argument.

A simile uses the word “like” or “as” to compare two different things and create a relationship between them — drawing them together to highlight the similarities between them.

An analogy uses a relationship between two ideas or things to explain one of them in a way that others find more relatable or easier to digest.

Just like a metaphor, a simile is generally shorter than an analogy.

One sentence is usually long enough for a simile, while an analogy is more elaborate and can take several sentences to fully articulate.

Did that clear things up?

Now that you know the differences between a metaphor, a simile, and an analogy, you won’t be stymied in a discussion on figurative language.

The next time someone tells you, “That’s not a metaphor; it’s a simile!” you can calmly point out, “Actually, a simile is a type of metaphor…”

Aren’t you glad you came here?

Now, if you have a little more time, why not check out other Authority.Pub articles on writing, so you can make your next book the best one yet?

We’d love to help you streamline the process and make it as enlightening and enjoyable as possible.

May your curiosity and passion for learning influence everything you do today.