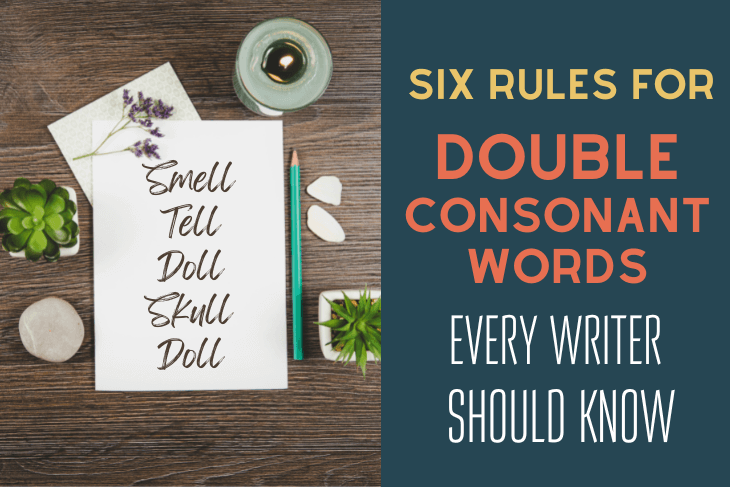 Double consonants are a complicated part of the English language.

Mastering the rules affecting them will level up your spelling comprehension.

But fair warning: things can — and do — get confusing.

Double consonants aren’t what you would call “straightforward.”

So if you’re learning English or brushing up on the basics, it’s wise to spend time reviewing double consonants and when to apply them.

To that end, we’ve made this double consonant study sheet.

There’s even a quiz at the end to test your skills.

What is a Double Consonant?

Double consonant words have two consonants in a row, like “tunnel.”

The phrase, technically, can also apply when two different consonant sounds occur in succession, as with “stamp.”

But when people talk about double consonants, they’re almost always talking about words with repeating consonants.

Double consonants can be a spelling obstacle. Since the rules (which we’ll get to below) don’t hew to a single pattern, it can be challenging to remember when to double a consonant and when to leave it be.

Generally, words that end in certain suffixes often call for double consonants. What are suffixes? They’re the endings tacked onto words to change their tense.

When adding one of these endings, there’s about a 75% chance you’ll need to double the preceding consonant.

Words That End in Double Consonants

Here’s a list of words that end with double consonants.

Words With Double Consonants in the Middle With an -ed Ending

Here’s a list of words with double consonant examples wherein the word has doubled consonants in the middle with an -ed ending.

How Do You Find the Double Consonant Word?

As you can see, double consonants are everywhere and are frequently found in words that have suffixes like —ed and —ing. But how can you pick them out?

CVC stands for “consonant, vowel, consonant.” When the three last letters of a one-syllable word adhere to the CVC pattern, the final consonant is doubled when adding a suffix. For example:

Some double consonant words are pronounced as either one or two syllables, but the spelling remains the same.

For example, “blessed are the meek, for they shall inherit the Earth” is a famous saying. However, the proper pronunciation for “blessed” isn’t the standard, one-syllable way. Instead, it becomes a two-syllable word in the “meek” statement.

When is it one syllable, and when is it two? Unfortunately, it’s contextually dependent.

As the name suggests, the syllable stress rule requires a good grasp of how syllables work in English. Instead of focusing on the consonants, it’s anchored in the syllable count.

How does it work?

If you stress the first syllable of a given word, don’t double the consonant. If the second consonant is stressed, go ahead and double up. To wit:

Vowels in the English language can either be short or long. Short ones appear in words like “mat” and long ones in locutions like “mate.”

In most circumstances (but not all), two-syllable words with a leading short vowel have a double consonant following them.

Examples of words that follow the vowel-length double consonant rule are:

A good way to remember this rule is by thinking of the word “apple.” It starts with a short “A” vowel followed by two “Ps.” So if the “A” you’re considering has the same sound as the one in “apple,” it probably calls for a double consonant.

The “rabbit rule” states that if a word has two syllables, only one consonant sound sits between the vowels, and the vowel is short, then the consonant in the middle is doubled.

For example, rabbit, happy, and kitten are all words with two syllables and a short vowel, meaning that the consonants’ bb, pp, and tt are doubled.

The One Vowel, One Consonant Rule

For single-syllable words, double the final consonant only if the word ends in one vowel and one consonant. For example, “mat” would become “matted.”

For multisyllabic words, double the final consonant if the word ends in one vowel, one consonant, and the last syllable is stressed.

The W-X-Y rule is simple. At the end of a word, don’t count w, x, or y as a consonant. Moreover, when sticking suffixes on the end, you never double consonants that fall into this category.

So Where Does The Comma Go? Before Or After So?

Test Your Knowledge of Double Consonants

We’ve discussed the ins and outs of double consonants in the English language. Now, let’s do a quiz! Don’t worry. We’re not grading you.

Part One: Pick the Right Word

16. What isn’t a double consonant rule?

17. What letter should count as a consonant at the end of a word?

19. Which Sentence is true?

20. For which one of these words would you double the final consonant before adding -ing?

Writing is an important skill. The better you are, the more professional opportunities will land in your lap. It really is that simple.

Moreover, although it’s a common bias, people who write well are typically seen as more intelligent, trustworthy, and reputable.

So put a little elbow grease into your writing. Spend 15 minutes studying every day. Within six months, your skills will improve. It may stretch your brain, but that’s a good thing.

If you know others who are learning English or brushing up on their skills, please feel free to share this page.