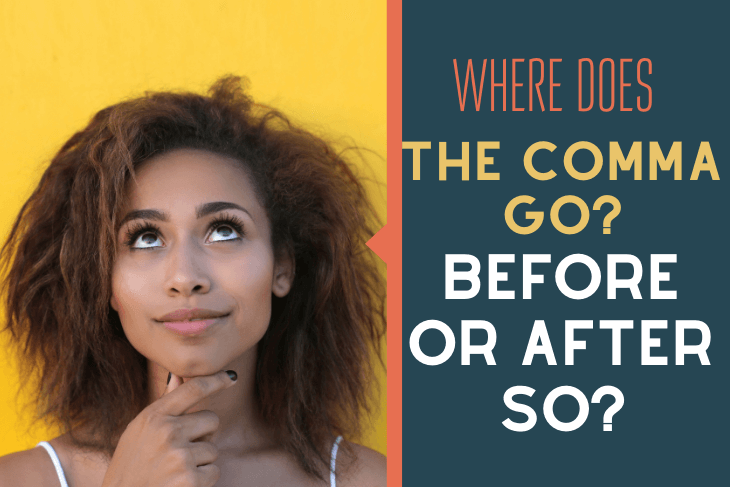 It’s not the first time you felt stymied as a writer.

It happens. You’re looking at a sentence you wrote and thinking, “Do you put a comma before so?”

The short answer is, “Sure. It can be any of those things.” But until you see when and how, knowing that doesn’t help much.

Once you know the rules described in this post, though, say goodbye to confusion.

You won’t miss it.

The purpose and meaning of the word “so” depends on where it stands. It can take on any of the following roles:

You’ll see all these uses in the rules and examples below.

You’ll see commas before “so” and commas after it.

And by the end of this post, you’ll know exactly why.

A Comma Before or After “So”? All You Need to Know

Once you read through the following rules and examples, you’ll know when to use a comma with so and when to leave it out. When in doubt, listen for the pause.

Comma After So At Beginning of Sentence

If you’re using “so” as a conjunctive adverb at the beginning of a sentence—which happens often enough in dialogue and other less formal writing—a comma comes right afterward.

Notice in that second example how a comma goes after the “so” but not after the “Or” at the beginning of the next sentence. The reason for that is the implied pause, however brief, that often comes after the word “so.”

It’s that implied pause that often gets writers to add the comma, even if they’re not 100% sure it belongs there.

On the other hand, the “or” takes about as much auditory space as the words that follow. It doesn’t need a pause for effect. It takes the same number of beats as the syllable that comes afterward.

You’ll hear the same pause in the next examples.

Commas After So Before a Parenthetical

Whether the “so” comes at the beginning of a sentence or somewhere in the middle, you need a comma right after it if it precedes a parenthetical expression.

If, on the other hand, the word “so” is part of the parenthetical expression (rather than separate), the comma comes before it, as you’ll soon see.

The next time someone asks you, “Do you put a comma before so,” you can tell them, “So glad you asked! And yes, you do —  in one of the following two cases:

Examples with “so” as a coordinating conjunction:

Examples with “so” as part of a parenthetical expression:

Examples of before and after:

When is a Comma Unnecessary?

You don’t need a comma before or after so in the following cases:

#3: When “so” is a subordinating conjunction

None of the dependant clauses after the word so could stand alone (hence the word “dependant”). This is what sets this construction apart from the use of “so” as a coordinating conjunction joining two independent clauses.

Put aside for the moment that the second example—and both examples of “so” as a subordinating conjunction—would sound better without the “so as.”

This is one of those cases where we’ll sacrifice simplicity and elegance to make a point.

Wrapping Up The “So” Comma Rules

Here’s a final, quick look at the rules about putting a comma before or after so.

#1 — If you can replace “so” with “and so” or “therefore,” it’s a coordinating conjunction.

If a coordinating conjunction joins two independent clauses, a comma goes before the conjunction.

Here, the word “so” implies causation. The second clause follows from the first.

#2 — If you can replace “so” with “so that,” it’s a subordinating conjunction.

A subordinating conjunction joins an independent clause with a subordinate one. No comma is necessary.

The subordinate clause depends on the independent clause. In the latter, the subject does something so that something else will happen or be true.

The subordinate clause details the result of the subject’s intentional action.

While it’s perfectly correct to say, “He installed a security camera. His family would be safe,” you can guess that the two are connected, but you lose the part where he installed the security camera with the express intention of keeping his family safe.

#3 — If your “so” comes at the beginning of a sentence as a conjunction, a comma goes after it.

Like it or not, starting a sentence with a conjunction has become more accepted. The Chicago Manual of Style even defends it as grammatically correct.

If you’re starting a sentence with “so,” you can hear the slight pause afterward — which you don’t typically have after a “but,” an “and,” or an “or.”

Putting a comma after the so enforces that pause. It’s just enough of a pause to warrant a comma but not enough to justify a dash, which would look pretty ridiculous there, anyway.

Let’s look at some examples:

The exception would be a sentence that starts with a construction like, “[Just] So you know… “ or “[Just] So we’re both on the same page,” in which case, “so” is part of a parenthetical expression (with an implied “just” before it) rather than as a conjunction.

As you know, when “so” leads a parenthetical expression, a comma goes before it. But if the expression is at the beginning of the sentence, the comma has nowhere to go.

When you’re writing dialogue, if the word “so” comes at the end of a quotation, unless it’s the end of the sentence, too, you’ll need a comma after it.

Often, when “so” appears in dialogue, it’s used as a conjunction, in which case a comma would go after it even if it didn’t come at the end of a quotation.

#5 — If your “so” comes at the beginning of a parenthetical expression, a comma goes before it.

If “so” is the first word of a parenthetical expression, a comma goes right before it — as it would even if so were not part of the expression. That’s just how parenthetical work.

Allow us to demonstrate with a few examples:

#6 — If your “so” comes right before a parenthetical expression, a comma goes after it.

If “so” comes right before a parenthetical expression, you need a comma to separate the two.

Granted, with “so” at the beginning of the sentence, you’ll almost always need a comma after it, anyway.

What about sentences where “so” isn’t the first word?

Sometimes, “so” is just an adverb meaning “very” or “also.” And‌ you don’t put commas before or after adverbs unless another rule comes into play.

In the above example, the comma comes after “so” only because it comes right before a parenthetical expression.

That’s not an issue with the following examples:

Now that you’ve seen all the rules and examples regarding commas before and after “so,” which ones did you find most helpful? And what’s your biggest takeaway?