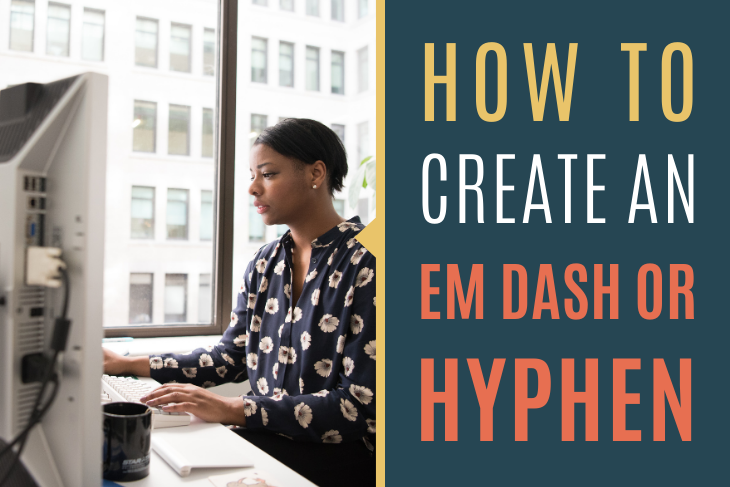 Do you know the difference between an em dash, an en dash, and a hyphen?

And when you’re in the middle of writing your latest masterpiece, do you know how to type an em dash when it’s just the thing to make a phrase stand out more?

It doesn’t help that, while hyphens get a prime spot on the PC keyboard, the en dash and em dash are nowhere in sight. But they’re worth a few extra steps, and knowing how to use them correctly will strengthen your writing and impress your editor.

And sure, maybe you’re thinking, “Would it have been so hard to put an em dash on the keyboard?” We get that. But until someone does something life-changing and puts one there, we do have ways of getting the dash we need.

So, read on to become a master of the three dashes and how they’re made.

How to Create an Em Dash or Hyphen

The hyphen is easy enough to fin, since it’s right there near the top of your keyboard after the number zero.

When you need more of a separation between words and phrases, though, you’ll need either an en dash or an em dash, depending on the context.

The en dash is sort of a long hyphen, joining one word to another word or phrase to imply a range that includes everything between them:

May–September (including all the months between them)
Pages 101–133

Sometimes, an en dash is used to connect a prefix to an open compound term (non-hyphenated) in lieu of a hyphen.

The em dash is a long dash that sets off related words or phrases that aren’t as intimately related to the rest of the sentence but that the writer wants to emphasize — like I’m doing here.

It can also be used to show an interruption in dialogue.

It can even be used in lieu of bullets for a non-numbered list or to substitute for an author name that’s already on a previous listing in a bibliography.

To create either one of these, you have the following options.

If you’re using a PC with a numerical keypad, you can type in either an em dash or an en dash using the following Alt-codes:

Unfortunately, most PC laptops won’t allow you to use numerical Alt-codes, even with an external (USB) keyboard equipped with a numerical keypad.

So, unless you’re working in Microsoft Word, the best way to get special characters like em dashes and en dashes is to use one of the following options:

With the first (and slowest) option, you’ll look for the symbols on your computer’s character map, then select and copy it to your clipboard and paste it into your document.

You’ll probably have to use the “Advanced view” option at the bottom of your character map and type in either “em dash” or “en dash” to find either one.

You can also copy and paste both an em dash and en dash to the end of your document — a few spaces below your cursor — and do a copy and paste every time you need one or the other.

Your character map also has the Unicode character codes, which you can use in the following way:

You actually do need to type out the number first — using either the alphanumeric keyboard or a numerical keypad — and then, holding down the Alt key, type an “x.” It’s weird, but it works.

Unfortunately, these codes don’t work in Google Docs or Scrivener.

With Google Docs, you can either copy and paste either one from the Windows Character Map, press the em dash on the iOS keyboard (if you’re using a Mac), or use Google Doc’s Special Characters Window:

Go to the Insert window
Select Special characters
Enter ‘em dash” in the search box
Then click the box with the em dash symbol to add it to your document wherever your cursor is resting.

Scrivener has autocorrect options, too – like Word and Google Docs – and can be set up to replace double dashes with em dashes.

In Microsoft Word, as long as you have a numerical keypad, you don’t need anything this complicated, as you’ll see below.

In Microsoft Word, you don’t need the numerical codes. Use these shortcuts, instead:

There’s a catch, though.

You’ll need to use the hyphen/minus sign on a numerical keypad, because the hyphen key on the alphanumeric keyboard won’t work for this shortcut.

Another option for an em dash shortcut is to type in a double hyphen, followed by a space.

Word’s Autocorrect will then replace the double hyphen with an em dash, unless you go into the Autocorrect settings and disable this particular option.

15 Tips to Help You Write Better And Attract More Readers

With a Mac, use the following shortcuts:

If the usual keystroke shortcuts don’t work on your laptop, though, it can’t hurt to try attaching an external full keyboard or numeric keypad.

Feeling confident about the em dash?

Now that you know how to type a dash, maybe you’re slightly worried that you’ll become an em dash fiend.

It happens to the best of us. Em dashes make it even easier to write the way we speak — whether you’re writing a blog post, some dialogue for your story, or a nonfiction book.

And while your editor might recommend removing some of them (especially if you happen to use one in every paragraph — no judging here), ultimately, whether you keep those em dashes or replace them with commas or parentheses is your choice to make.

It’s hard to go back to commas. They’re practically invisible. And parentheses are not the same as dashes.

That said, sometimes we mix and match and hope for the best. This is one reason why a good editor is such a tremendous asset.

But if you know the difference between the hyphen, the en dash, and the em dash, you’re doing your all-star editor a big favor.

And when your book is ready to share with your readers, check out other posts on Authority.Pub for the next steps in marketing, setting up ads, getting reviews, etc.