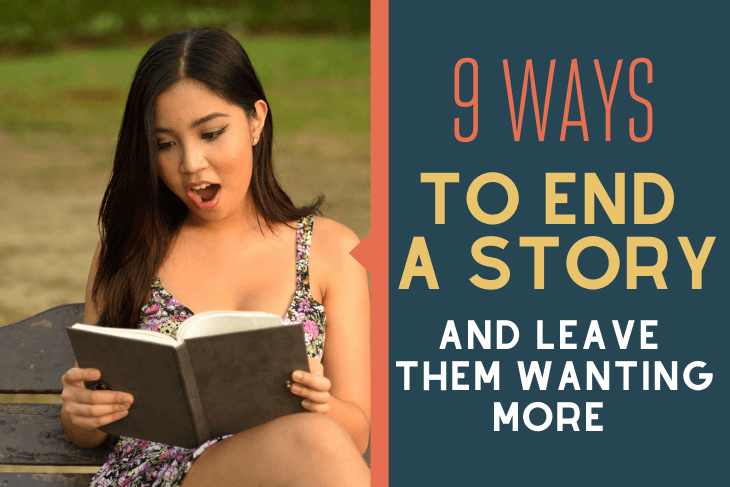 You’re mapping out your story, playing with ideas for its beginning, middle, and end.

You’ve read so many beautifully-written stories by now.

You’re no stranger to book endings.

It’s easy enough to criticize another author for the way they chose to end their story.

But now you’re faced with the same challenge: how to end a novel in a way that makes sense and will leave your readers hungry for more, especially if you’re writing a series.

How to End a Story: 9 Ways to End Your Book Or Story

Knowing how to end a book in a way that leaves a positive impression on your reader is a skill you can learn and improve with practice.

The ending of a story is inseparable from all that comes before it — even when things don’t happen as the reader might expect.

How many endings do you typically imagine for a story once you’ve started reading it? Chances are, only one or two suggest themselves as most likely, and you don’t give much thought to less probable outcomes.

As a writer, you can use this to surprise your reader with an ending other than what you’ve led them to expect.

The goal is to leave them thinking, “This ending is even better than the one I imagined.”

With this, the story ends the way it began. What’s happening at the ending brings the reader right back to where the character was at the start. And you want your reader to notice this and pick up on the reason behind it.

You want them to see the fuller meaning behind both the end and the beginning. Because otherwise, why would you repeat the same scene (or its essential elements)?

Something in the story’s beginning holds a clue as to what the reader can expect. But they may not see that until they reach the end.

The ending could reintroduce a key character included in the beginning and remind the reader of a detail they might have overlooked. Or it could bring the reader back to the place where the story began and reveal something that was hidden before.

The tie-back ending is similar to the full circle ending but doesn’t have to tie the ending of the story to its beginning. It can tie back to an important detail mentioned any time earlier in the story.

This is where foreshadowing can come in. Or it may just be a detail that seemed only moderately important when first introduced.

In the ending, the reader sees its full significance. You want them to have an “Aha!” moment when they read your tie-back ending as if they’d always suspected there was more to that detail than was immediately obvious.

Validate that feeling, and they’re more likely to want more stories from you.

If your story has a tight timeline with one thing happening after another, your reader can practically hear the clock ticking, especially if your main character has a clearly-defined amount of time to work with

For example, if your main character says something like, “I have exactly one hour and ten minutes to bring $10,000 to the rendezvous point,” the reader will want you to help them keep track of the passage of time as the story unfolds.

With a time-frame ending, you decide what happens last, whether the protagonist succeeds in meeting the deadline or not. This ending isn’t so much about whether the main character succeeds but what happens when their time is up.

After the build-up of suspense with the ticking clock, the main thing is keeping the characters’ actions within that time frame.

Lose track of time, and you lose the reader.

This one is similar to the time-frame ending but involves place instead of time. Think of a story that moves from one place to the next.

Your characters, for example, could be traveling from one place in the world to another to find the missing pieces of something with the potential to save millions. The story is, essentially, divided by place, each one a mini-story in itself.

The end of this story has more to do with the final destination, which is a literal place on the map, whether it’s a map of the earth, a fictional world, or the universe.

The place is the thing. It’s the final piece of the puzzle. It’s where everything finally makes sense, even if the ending isn’t everything the characters hoped for.

Reaching that destination is what ends the story.

An ambiguous ending to a story leaves the reader mulling over “what ifs” because it doesn’t explicitly state what happens to the characters. With an ambiguous ending, you invite your readers to speculate about what will happen next.

Maybe the story ends with the two main characters having a conversation on a beach, and it seems like they’ll end up together. But there’s no guarantee of that.

You can suggest an ending or hint at it without making it official and ruling out any alternatives. The important thing is you leave your reader wondering what could happen.

If this is the end of a series, you want them to at least have enough reason to hope the protagonist will be happy, that the antagonist has a redemption arc, or that everything works out reasonably well for all.

You just don’t guarantee it.

101 Of The Most Clever Dialogue Writing Prompts

The Definitive Guide To All Parts Of A Book

How To Write Erotica: The Ultimate Guide

The unresolved ending to a story leaves the reader with a big question: How does this story continue? Because it doesn’t feel like an end. It feels more like a calm before the next storm hits.

You’ll see this kind of ending a lot in series — like Harry Potter and The Hunger Games.

You don’t want your reader to really feel an ending until the last book in the set.  Otherwise, they won’t feel a need to move right on to the next installment.

That said, the name for this ending is a bit misleading because the main problem of the particular novel in a series can be resolved by its end. It’s just that the bigger problem in the larger story is still there.

This ending solves the problem, finishes the quest, or otherwise ties everything all together with a neat little bow.

This kind of ending doesn’t leave any loose plot threads hanging, but it doesn’t necessarily end things in a way that leaves the reader sighing happily.

Ideally, though, you want a resolution that leaves your reader satisfied. What was broken is fixed. The crisis is no more. The protagonist is in a better place.

The resolution should feel believable, though — not forced or pulled out of nowhere. You don’t want to insult your reader’s intelligence. No one wants to get to the end of a story and find it resolved by the main character waking up and sighing with relief.

Don’t do that to your characters. They’re capable of so much more.

Like an epilogue, this type of ending explores what happens to the characters beyond the end of the main story.

After all, the end of a story can still leave questions in your reader’s mind:

How do you see your most important characters living a year after the main conflict’s resolution? Whose lives improve and whose lives remain much as they are? Who suffers the most as a result of the main character’s actions?

And could this lead to another story involving these characters?

Now that you know how to end a short story or novel in a way that leaves your readers craving more of your work, why not take some time today to play with one of them?

Take a story that’s a work in progress and free-write an ending that fits one of the types described above. Then try an alternative ending and see how differently you feel about it.