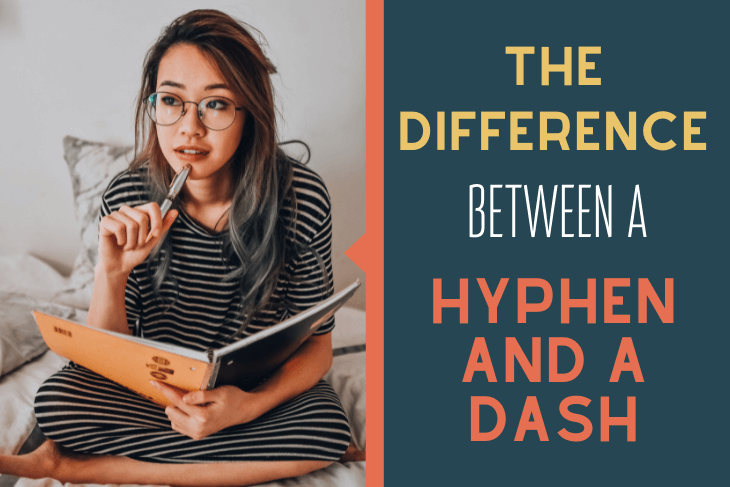 Do you know the difference between a hyphen and a dash?

Or between an en dash and an em dash?

(Who even came up with the en dash as a separate thing?)

Even if you’re pretty sure of the difference between all three, sometimes it helps to read a clear overview of what sets these marks apart — and which one goes where.

By the time you read this post, you’ll be a hyphen vs. dash expert.

What Is a Hyphen?

A hyphen separates two parts of a compound word. That word could be a noun or a modifier. The hyphen is what joins two nouns or a noun and a gerund into a single word like beach-house or dog-friendly.

You’ll find the hyphen on any standard U.S. keyboard after the zero (0) key.

What does a hyphen look like? It’s not as silly a question as it might sound because what looks like a hyphen could also be an en dash.

Because someone decided it made sense to distinguish the two. Or maybe someone mistook a hyphen for a dash — or (gasp) used a hyphen in place of an em dash. We won’t dwell on that.

A dash vs. hyphen error probably won’t land you in jail. But why risk it?

Simply put, a hyphen is a very short straight line of punctuation. It’s easier to show this mark’s potential with real words:

Not all compound words use hyphens.

Hyphens appear in compound modifiers that come before a noun — but not those that come afterward:

Also, leave out the hyphen when the compound modifier starts with an adverb ending in -ly:

Besides the above rules, over time, many hyphenated words lose their hyphens and become closed compounds:

Rule #1 with hyphens is you never leave a space before or after it. Hyphens might as well be a letter in the middle of the word.

What Is a Dash?

Dashes separate words or groups of words (like parenthetical expressions).

That brings us to the two different dash types: em dashes and en dashes, which, though similar, belong to different worlds (i.e., contexts).

Speaking as an em dash lover, I think the biggest trick with em dashes is not to overuse them. On the other hand, the en dash often gives the floor to its “body double,” the simple hyphen—which is right there on the keyboard.

Not everyone can be as cool (and worth the extra keystrokes) as an em dash.

If you see a short, straight line breaking up words in a sentence, you’re looking at a dash, not a hyphen.

That said, let’s look at the two dashes and what makes them different.

First, one is longer:

Think of the em dash’s longer length as that extra beat before the next syllable. It’s that extra bit of pause you don’t get with a comma.

You can use an em dash either as a more emphatic comma or as a replacement for a semicolon or colon.

Em dashes also are handy with dialogue that’s broken up.  They show an interruption or a change in direction, with narrative in between, as we’ll show later with some examples.

To insert a dash, you’ll need your alt key and number pad:

Contrary to the directions found in multiple dash-related posts online, you cannot create an en dash by simply holding down the Ctrl button and hitting the minus/hyphen (-) key.

This may have worked in the past. Try it today, and you’ll see the fonts on the page in front of you shrink (i.e., zoom out). Ctrl with the plus (+) key enlarges or zooms in.

If your keyboard doesn’t have a number pad on the right-hand side, you can also use the character map for Windows — under “Windows Accessories.”

The Difference Between a Hyphen and a Dash

It’s tough to decide whether to go with a hyphen or dash when you don’t have a solid grasp of their differences.

And size isn’t the only difference. To really understand these punctuation marks, you need to know the uses for each.

Specific Uses for the En Dash

As you saw above, en dashes aren’t just for showing numerical ranges, though that is one of their main things. We’ll offer some examples further down, but, for now, let’s get clear on all the uses for the en dash:

That last one allows you to avoid awkward hyphenated expressions (like post-Civil-War).

Just for a laugh, let’s try putting a hyphen where an en dash belongs:

To the untrained eye, they sure seem interchangeable. And, to be fair, Grammarly, ProWritingAid, and even human editors probably won’t make a fuss, either.

In fact, other than in formal, printed publications, hyphens often take the place of en dashes, especially when indicating numerical ranges.

Because, as pointed out earlier, the hyphen key is right there on the keyboard. And, like hyphens, en dashes do not have spaces before or afterward.

Em dashes, on the other hand, can go either way: a space before and after or no spaces.

So Where Does The Comma Go? Before Or After So?

Should You Capitalize After A Colon? Here Are The Rules You Need To Know

Now, let’s briefly touch on the use of single hyphens or en dashes where an em dash belongs.

If time is of the essence, and you don’t know which code to type in with the Alt key (because, for some reason, no one taught you this as soon as your tiny hands could navigate a keyboard—or you just forgot), please at least use a double-hyphen to stand in as an em dash.

It’s aesthetically painful but less so than a single, lonely hyphen trying (and failing—miserably) to do an em dash’s job.

It had to be said.

Examples are pretty useful for reinforcing grammar rules, so we’ll include some here.

Granted, quite a few compound words joining prefixes (pre-, post-, bi-… ) to whole words have ditched the hyphen and become closed compounds, at least in some cases.

You’ll still see some of them hyphenated some of the time. But your editing app of choice (Grammarly, ProWritingAid) might prefer one over the other:

Now, let’s have some dash examples to show them off a bit:

Now that you’re a dash vs. hyphen expert, you can use them in your work with confidence and style. And when someone asks, “Does a dash go here?” you can ask, “Do you mean an em dash or… an en dash?”

May you use this power wisely — and have fun with it.