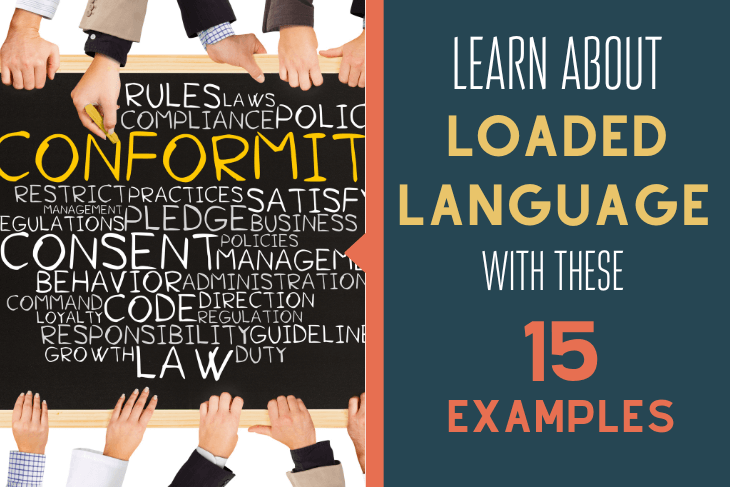 Writers who make effective use of loaded language produce influential and memorable writings.

A word’s meaning changes depending on how you use it and the meaning of other words you include with it.

We hear them in the news, from politicians, and sometimes even from our friends and family.

When someone wants to influence you, they load their words.

The art of persuasion thrives off loaded language.

What are Loaded Words?

Loaded language or emotive language is a type of language that uses loaded words or phrases to create a strong emotional response.

For example, “I’m sorry” can be a loaded word if used in a personal attack, but it’s not loaded if used as an apology.

Charged language is like loaded language, except that it is not emotional. Instead, it includes words or phrases to insult or offend.

For example, the term “pie-face” is a charged phrase used to insult someone.

Some people might feel uncomfortable if they are referred to by a word that suggests they are different from the majority.

Others might find the term offensive and choose not to use it. People with disabilities can have as much ability and potential as anyone else.

The term “person with a disability” emphasizes that people with disabilities are just that — people. They have the same hopes, dreams, ambitions, and needs as everyone else.

What Are Some Loaded Language Examples?

Everything wrong is not bad, and everything bad is not evil. The term evil causes a person to think of diabolical and sinister characteristics.

It is a term broadly used in religious writings. If I describe a person’s voting decision as evil, I’ve questioned their moral compass.

Someone may say, “Hate is such a strong word.” It is. Hate, in place of a neutral word such as dislike, communicates the level of dislike someone has for something or someone else.

It depends on who you ask, but martyrs are not considered heroes in some spheres. When the term terrorist is used to describe anyone who kills for a cause, the term becomes charged language.

While murder as a word is not charged, the context in which it is used can make it a loaded word. For example, suppose a politician gives a speech to potential voters who are against abortion. In that case, they may accuse abortion doctors of murder while simply performing a medical procedure.

In both cases, there could be other reasons that have nothing to do with protecting life or protecting choice.

The word illegal used this way about immigrants suggests a person has migrated somewhere illegally.

In fact, in 2019, roughly 5 million unauthorized immigrants in the U.S. arrived in the U.S. by following immigration rules.

This is a popular political buzz term to get constituents to oppose a tax on estates, but it has a negative connotation.

Because no one is comfortable with anything that has to do with dying, saying death tax is a way to get someone to have negative feelings about estate taxes.

As a charged phrase, this term offers the ideal that a race of people should be clean from interracial mixing or that race will become inferior.

These words below are neutral and positive in their literal meaning, but if used as adjectives during talking points, they become loaded terms or key parts of loaded phrases.

The word success by itself has no motivation or influence. But what I say, “Only successful people get eight hours of sleep at night, so buy our mattress?”

Here, we are appealing to a buyer that their success depends on getting eight hours of sleep with the advertiser’s mattress.

“Happy wife, happy life” is a phrase that suggests that if the wife in a marriage is happy, then the husband should be as well.

However, this doesn’t account for same-sex marriage or the real possibility that a husband can be unhappy for other reasons even though his wife is happy.

Consider the phrases wealthy tax breaks or tax breaks for the wealthy. (Also, tax break itself is loaded) The term wealthy signals privilege and special access for those who are not wealthy.

You may find the words “powerful drugs” when one person desires to dissuade another against a certain prescription or if you were trying to persuade someone to use holistic measures instead. You may highlight the side effects of “powerful drugs” to make your point.

Think about the phrase “hardworking middle-class.” Many believe a lower class must work harder to make ends meet.

Upper-class workers may put in just as many hours of work. The difference is in their pay, not how hard they may be working.

How Do Writers Use Loaded Language?

When used effectively, loaded language can be a powerful tool for a writer. It can help to create an emotional connection with the reader or listener, and it can also help to persuade them of a particular point of view.

However, it is essential to use loaded language carefully, as it can also alienate readers or listeners if it is overused or used in a way that is not appropriate for the audience.

Consider the purpose and audience for your message. If you are writing to an audience of vegans about building a vegan leather business, then you must write from an objective lens.

Some euphemisms are so common that we don’t readily recognize them as loaded or charged language. For example, if we are writing to an audience of vegans, we would not use colloquialisms like “high on the hog.” You could offend them without knowing it.

If you’re writing persuasive material, your audience must be the focus still. Instead of avoiding charge words, this is the moment you make effective use of them so you can influence them to buy. The goal is to know when to do what and how. Consider the pointers below:

The Magic Behind Loaded Words

Loaded language can be positive or negative, depending on your chosen words. Anyone who addresses an audience, whether it’s through writing or speaking, should know what loaded words are and how to use them effectively.

We recommend you keep a loaded words list that pertains to your niche. Your audience will appreciate you for it.