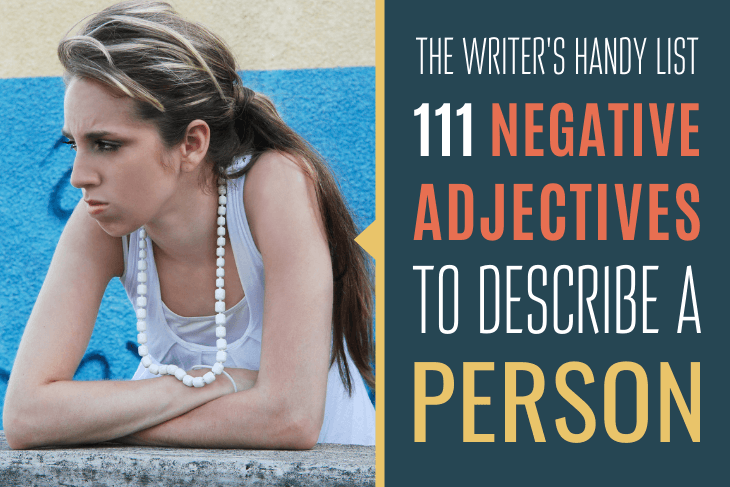 Your antagonist is such a jerk!

You just know your readers will classify this person as one of the worst fictional people ever created.

If you need to describe this person, though, you’re not sure of the best words to use.

Where’s a list of negative adjectives when you need one?

Look through the generous list below for just the right words.

You’ll know them when you hear them.

111 Negative Adjectives to Describe a Person

The following list — complete with brief descriptions — is our answer to the question, “What are some negative character traits?” You’ll find plenty of synonyms in each group, but each word has its own nuances.

Listen to the words as you say them aloud to hear which ones fit your character best.

1. Aloof — distant or detached from others; keeping others at a distance

2. Apathetic — lacking any concern or feeling for others; indifferent or insensitive

3. Arrogant — believing oneself to be superior to others and acting like it

4. Boastful — tending to brag about one’s accomplishments, possessions, or abilities

5. Big-headed — having an inflated sense of one’s importance or intelligence

6. Callous — not affected by the suffering of others

7. Conceited — having an excessively high opinion of oneself or one’s abilities

8. Condescending — talking down to those they consider less intelligent

9. Detached — not interested in another’s problems or welfare; free of concern

10. Dismissive — quick to disregard others or brush them off as unworthy of attention

11. Egocentric — self-centered or self-absorbed; focused on serving the ego

12. Envious — coveting the possessions, status, or accomplishments of others

13. Greedy — amassing and hoarding possessions (or money, food, etc.) to oneself

15. Narcissistic — self-centered to the point that others are tools for self-gratification

16. Patronizing — talking down to those they consider inferior in some way

20. Supercilious — acting superior or above your company; dismissive or aloof

21. Vain — having a high opinion of one’s appearance or the impression one is making

22. Vindictive — driven to punish those who’ve crossed them in some way

1. Abrasive — lacking any softness, tenderness, or tact in their expression

2. Bad-tempered — short-tempered or quick to anger

3. Bigoted — prejudiced against and hostile towards those of a different race, religion, or sexual orientation

4. Contemptuous — feeling and showing contempt or hatred toward others

5. Cynical — expecting the worst from a person or from a situation

6. Dogmatic — inflexible in their beliefs; laying down principles as indisputably true

8. Grumpy — quick to anger or irritation; irritable; lacking in humor

9. Hypercritical — quick to criticize others or to complain

11. Inflexible — fixed in one’s beliefs and unwilling to consider other viewpoints

12. Intolerant — refusing to tolerate those of a different race, religion, or sexual orientation

13. Jealous — feeling threatened when a friend or S.O. is friendly toward another

14. Judgmental — quick to judge others, typically due to ignorance and/or hubris

16. Nihilistic — believing that life, existence, and moral principles are meaningless

18. Pessimistic — tending to believe or expect the worst

20. Rude — lacking in manners or concern for the feelings of others; disrespectful

21. Narrow-minded — refusing to listen to or tolerate contrary viewpoints or new ideas

22. Petty — small-minded or quick to take offense; spiteful or grudging

23. Pig-headed — stubborn to the point of self-harm or self-destruction

26. Unforgiving — refusing to pardon an offense or injury; holding a grudge

Negative Adjectives for People You Can’t Count On

1. Careless — clumsy or lacking in awareness of the effect of your behavior on others

3. Disorganized — visibly lacking in organization or any semblance of order

5. Flaky — tending to forget one’s obligations; failing to show up

6. Foolish — lacking in wisdom or acting without wisdom

8. Inconsiderate — lacking in or acting without consideration for others

9. Indecisive — unable to make a decision

10. Indolent — lazy or shiftless; lacking in aspirations, direction, or drive

11. Irresponsible — lacking in or abdicating responsibility for one’s own actions or decisions

14. Thoughtless — lacking in or acting without thought for others

15. Unpredictable — acting in a way no one can predict; defying expectations

19. Vague — unclear in one’s thinking or expression; irresolute or ambiguous

20. Weak-willed — lacking a strong will; easily dominated by another’s will

2. Conniving — plotting or scheming to gain a benefit at another’s expense

3. Deceitful — acting with intent to deceive or trick another

4. Dishonest — lacking in or acting without honesty

5. Fawning — flattering or obsequious toward someone to gain approval or favor

6. Indiscreet — too ready to reveal things that should remain secret or private (TMI)

7. Machiavellian — seeking one’s own benefit at the expense of others; ruthless

8. Malicious — acting with malice or extreme ill will; malignant

9. Philandering — cheating or disposed to cheat on a spouse/partner with another

10. Shifty — scheming or untrustworthy; given to deception or betrayal

11. Scheming — given to making secret and/or underhanded plans; devious

12. Secretive — keeping information to oneself, even when others have a right to it

13. Sneaky — acting to avoid detection, often when involved in wrongdoing

14. Underhanded — dishonest or devious; secretive and marked by deception

15. Untrustworthy — unreliable or dishonest; not to be trusted

1. Aggressive — ready or likely to confront or to attack; openly antagonistic

2. Bossy — autocratic or given to ordering people around; domineering

3. Confrontational — quick to confront others in opposition; argumentative

4. Cowardly — lacking in or acting without courage or honor

5. Cruel — willfully causing pain and suffering to others; without mercy

6. Domineering — expecting full and unconditional obedience from others

7. Belligerent — ready to do battle; hostile or aggressive toward others

8. Hostile — unfriendly and antagonistic; ready or likely to confront or attack

10. Malevolent — extreme ill will; having or showing a desire to harm someone

11. Manipulative — calculating or controlling toward another to get a desired result

12. Possessive — treating another person as one’s possession or entitlement

13. Predatory — preying on others for one’s own gratification

14. Sadistic — relishing or deriving pleasure from another’s pain or suffering

15. Violent — using or given to using physical force to harm or kill another

1. Antisocial — averse to or avoiding the company of others

3. Facetious — jesting in a way that’s (often) inappropriate or provocative

4. Finicky — too picky with regard to food or drink

5. Gullible — trusting too easily or without good reason

7. Meddlesome — having a tendency to insert oneself into another’s business

12. Ostentatious — showy for the sake of being noticed and admired

Here are some examples using negative adjectives from the list:

Have you found the negative adjectives for your book character?

Now that you’ve looked through the list of negative adjectives, which ones stood out as particularly fitting for your antagonist? Or which ones describe a minor character who, in their own small but significant way, makes your protagonist’s life harder.

Oh, the possibilities! Whether this character is shaping up to be a devious but ultimately likable rogue or a fake friend who nearly costs your hero everything, they deserve carefully-chosen adjectives.

Give them our best.