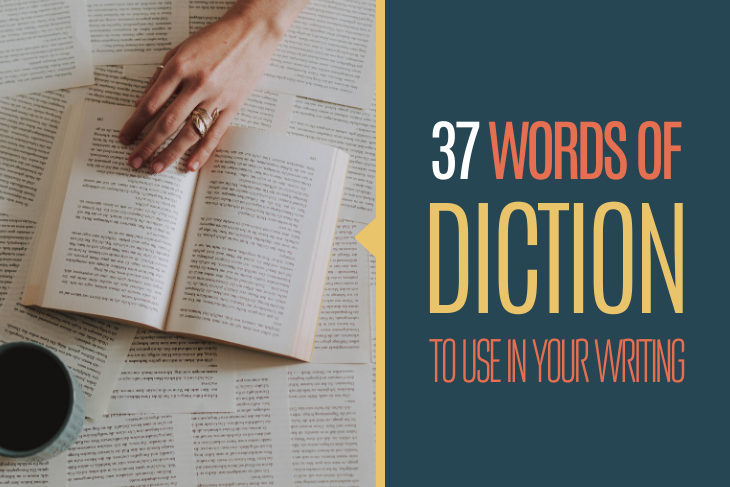 When was the last time a reader asked you about the diction you’re using in your current work in progress?

Most people ask about the characters, the plot, maybe the theme. Maybe. But diction doesn’t come up often in friendly conversations about books.

Considering how important it is, though, maybe it should.

And considering the types of diction you have to choose from (it’s not just a question of formal vs. informal), I’m glad you’re here to learn more about it.

Diction has to do with your choice of words and how they communicate a particular style or tone — whether in speech or writing.

One might be formal, the next slang, and the last one colloquial. And those aren’t the only possibilities when we’re talking levels of diction.

But what’s the point of it all? What does diction have to do with the reader’s experience of your written work?

Your choice of words — your vocabulary – plays a critical role in establishing your style and tone, as well as your credibility as a writer.

No one, for instance, who wanted to be taken seriously would use slang diction in a business report. And no one expects a teen to use formal or pedantic diction when texting her friends.

Diction fulfills its purpose in the following four ways:

While we can boil down the types of fiction to a manageable number, this article would be incomplete without a more comprehensive list of words to describe diction.

Reviewing this diction words list will help you identify each type in the diction examples that follow.

1. Abstract — using language to represent the intangible; general (not specific)

9. Connotative — suggesting meanings other than the dicitionary definition

11. Denotative — contains an exact meaning; not open to (subjective) interpretation

17. Esoteric — understood by a chosen few or those belonging to a secretive group

18. Figurative — using language to create a mental image or illustrate an idea

22. Jargon — language used by a specific field of work or study

32. Scholarly — highly educated; specific to a study or field

Examples of Diction in Writing

The best way to illustrate the different types of diction is to provide examples, along with clear explanations of each.

And by using famous examples of diction, we can show how they lent credibility to those works and made them more enjoyable to read.

Many of the words used to describe diction are variations on one of these well-known diction types. High diction and elevated diction, for example, are formal.

Vulgar diction is more often associated with slang, though it could also be colloquial or concrete.

Neutral diction uses language geared toward the general population and excludes idiomatic expressions and colloquialisms, as well as anything that would only make sense to a minority of its audience.

It’s neither formal (elevated) nor informal (conversational). It’s primary purpose is to communicate something in language everyone will understand.

You can probably think of some examples of neutral diction: emergency broadcast messages, robot dialogue, marketing materials for a global business.

Compare those to the examples for each of the following diction types:

Instead of appealing to the senses, it calls upon intuition and big-picture thinking.

“She walked into that room smelling like high expectations. But she caught one whiff of me and frowned.”
“My yogurt tastes like cheap candy and broken promises. Yours?”

Abstract diction isn’t about painting a picture or invoking one or more of the senses.

It’s about ideas and emotions, not things you can point to. It’s subjective and open to interpretation.

Concrete diction uses language that appeals to the senses.

“He sat on the botton step, eating an apple and skimming the “Help Wanted” ads.”
“She wore the purple dress with the amethyst choker.”
“A light green SUV rolled quietly up to driveway and stopped.”

All of these examples create mental images of real, concrete things.

The specific details make it easier to picture each item, making it seem more real.

Character Development: How To Make Your Book Characters Unforgettable

Metaphor, Simile, And Analogy: Everything You Need to Know

From Hamlet by William Shakespeare: “What a piece of work is a man! How noble in reason, how infinite in faculty! In form and moving how express and admirable! In action how like an Angel! In apprehension how like a god! The beauty of the world! The paragon of animals! And yet to me, what is this quintessence of dust? Man delights not me; no, nor Woman neither; though by your smiling you seem to say so.”

The formal diction in this example conveys the seriousness of the moment and of the speaker’s attitude.

His meaning is clear, though his choice of words is elevated (not simple or pedestrian).

Think of the last email you wrote to a friend or family member — or the last text message you tapped out in a hurry.

Most likely, your diction was informal. It might even have included some slang or colloquial expressions (examples for which you’ll see up ahead).

In literature, colloquial diction helps us immerse ourselves in the real lives and attitudes of the characters.

From John Steinbeck’s Of Mice and Men:

“Don’t let him pull you in—but—if the son-of-a-bitch socks you—let ‘im have it.”

“Never mind, never mind. I’ll tell you when. I hate that kind of guy. Look, Lennie, if you get in any kind of trouble, you remember what I told you to do?”

Lennie raised up on his elbow. His face contorted with thought. Then his eyes moved sadly to George’s face. “If I get in any trouble, you ain’t gonna let me tend the rabbits.”

The colloquial diction in this example uses coarse language to realistically portray the middle-aged men speaking, who are neither well-educated nor refined.

Jargon is typically associated with a subject, occupation, or business and often includes abbreviations known only (or mostly) to people in these subsets of the population.

Unlike slang, though, jargon isn’t invented for casual purposes. Jargon terms are created for the convenience of the people in a specific profession or business.

Using the correct jargon in a story that calls for it helps build credibility.

Poetic diction takes into account not only the meaning of each word but its sound and rhythm to create a mood.

It brings words together to create a harmonious effect — not just to communicate something.

From “In Memoriam” by Alfred Lord Tennyson: “I sometimes hold it half a sin / To put in words the grief I feel / For words, like Nature, half reveal / And half conceal the Soul within. // But, for the unquiet heart and brain, / A use in measured language lies; / The sad mechanic exercise, / Like dull narcotics, numbing pain. // In words, like weeds, I’ll wrap me o’er, / Like coarsest clothes against the cold: / But that large grief which these enfold / Is given in outline and no more.”

The diction in this poem is not the kind most people would use in casual conversation (especially with the rhyme, but even without).

Anyone who did would probably earn a reputation for being eccentric or melodramatic.

The word “slang” itself is short for “shortened language.”

I just learned today that “bae” stands for “before all else” (I thought it was just “babe” without the second b).

That said, there are different kinds of slang — each attributed to the group of people that uses it, rather than to a specific geographical region.

The Outsiders by S.E. Hinton — a novel about the conflict between groups of kids from opposite sides of town — uses slang terms like “fuzz” for police, “woofin” for kidding, and “heater” for gun.

The slang used in both these examples is used by a specific group of people (street gangs and the wizarding community, respectively), and their inclusion in the stories makes the characters feel more real.

How will you use these different types of diction?

Now think of some of your favorite fictional characters and the way they talked.

Would you be able to identify the diction type each one uses most of the time?

Think about how each character’s diction came across to you when you first met them on the page. Something about their choice of words (or the author’s in describing them) drew you in.

You trusted it and kept reading.

I bet you’ll be more aware of your own choice of words today, when you’re speaking as well as when you’re writing — along with the words that stay in your head.

May your words (or the balance of them) make your day and someone else’s better.