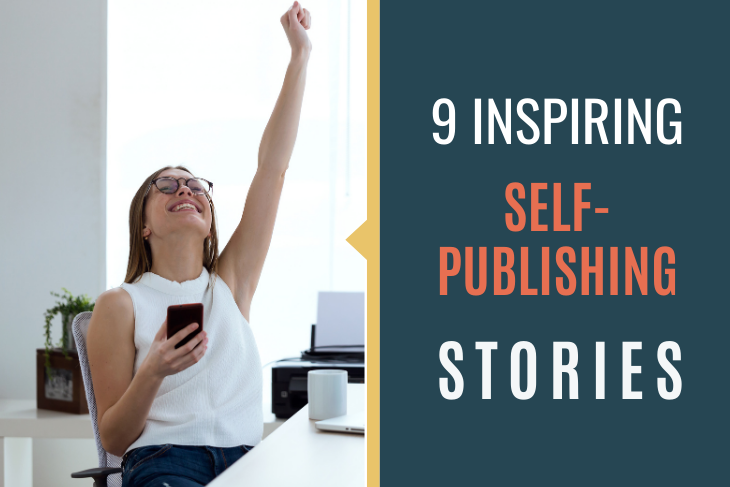 You’ve been learning so much about self-publishing.

And you’re not afraid of working for the success you want.

It’s no secret self-publishing has its challenges.

And when the going gets tough, sometimes it helps to remember self-publishing successes — particularly those involving the types of books you want to write.

What can the most successful self-published authors teach you?

And what could you do this year to get closer to your goals as an indie publishing author?

Read on to find inspiration in those whose hustle and creativity match your own.

Can a Self-Published Book Be Successful?

Any good self-publishing success story typically involves one or more of the following markers of worldly success:

Granted, six-figure incomes are not the norm for any author. Data from a Digital Book World and Writer’s Digest survey show a median income of $5,000 a year or less for self-published authors, with nearly 20% earning little or nothing.

Only 1.8% of self-published authors make over $100,000 from their writing. The authors described below are in that camp. And all of them would like to see more authors join their ranks.

Is It More Profitable to Self-Publish?

It can be if you think like a publisher (and a reader) and tick the right boxes with your book writing and marketing plan:

Keep in mind, though, that self-published authors are responsible for the cost of preparing their book for publication (editing, formatting, and cover design) as well as the cost of marketing it. To turn a profit, writers must have sales that exceed the amount they invested.

Good thing the royalty rates are so much better.

What Is The Most Successful Self-Published Book?

The most successful self-published book to date is E.L. James’ 50 Shades of Grey.

What started as fan-fiction for Twilight became its own thing, selling over 100 million copies worldwide and holding the record for “fastest-selling paperback.” It stayed on the New York Times Bestseller list for 133 consecutive weeks.

James even co-produced the film adaptations for Universal Studios, which made more than $1 billion at the box office.

While this is not an exhaustive list, the nine authors celebrated here wrote best-selling self-published books.

More than one became disenchanted with traditional self-publishing for one reason or another.

All found more success in the indie route than they expected.

McGuire’s debut novel, Beautiful Disaster, became an international bestseller, paving the way for the New Adult genre. She sold over 30,000 copies within the first few months.

An imprint of Simon & Schuster, Atria, bought the rights to Beautiful Disaster and, a while later, her second novel, Walking Disaster. But McGuire grew weary of the traditional route and returned to self-publishing with her third novel, Beautiful Oblivion.

She even made history as a self-publishing author when she struck a print deal with Walmart. Her novel, Beautiful Redemption, hit the retail giant’s shelves in September 2015.

The celebrated author of the Silo Trilogy makes this list not only because of the success of this and other books that bear his name but because, according to his website, the man is “currently sailing around the world.” Honestly, how much cooler can an author get?

This brings us back to his first book, Wool — the first installment in the Silo Trilogy — an Amazon Editor’s Pick for “Best Science Fiction and Fantasy” (and for good reason).

His book page displays his other series, including Bern Saga (with Molly Fyde), the Wayfinder series, his Beacon 23 series, and standalone works like Glitch and I Zombie.

A writer of paranormal fiction, Hocking started as an unknown and became a bestselling author after deciding to self-publish on Amazon.

Before her success, she worked a day job caring for disabled people and a night job writing into the wee hours. She wrote a total of 17 unpublished novels, all of them rejected by publishing companies, before deciding to self-publish.

A few days after publishing her debut vampire novel, My Blood Approves, she sold nine copies a day. She’s now written over 25 novels, which you can see on her website.

In 1997, Robert decided to ditch the 9 to 5 and wrote his flagship book, Rich Dad, Poor Dad, which sold 27 million copies. The financial advice and unique perspective in the book (to say nothing of the provocative title) made it the # 1 personal finance book of all time.

From that first book came 13 others, all of which you see on this page.

His books have now been on the market for over 20 years, and readers continue to benefit from financial advice not typically taught in schools or even in business degree programs.

33 Poetry Publishers Who Can Publish Your Poetry Book

15 Fantastic Author Websites To Inspire You

Alegre wrote and self-published her first book, The Legacy of Lanico, in 2019 after seeing little representation of Latinx authors in the publishing industry. She worked with professional editors to refine her epic fantasy, which has an average rating of 4.9.

Grateful for the chance to go to college and earn a degree, she worked a desk job when a role change prompted her to open a Word doc and start writing.

She’s planned another four books for the series and intends to continue with the self-publishing route, hoping to inspire other Latinx creatives with a love for storytelling.

Northumberland-born Louise Ross worked as a lawyer in London when she wrote her DCI Ryan series, based in Northern England. Her self-published novels have sold over 5.5 million copies, and 18 of them even reached the #1 spot on bestseller lists.

Her debut novel, Holy Island, hit the market in January 2015 and became the #1 bestseller in the Amazon UK and Australian charts.

Since then, she’s turned down several offers from publishing companies and has accomplished worldwide fame by her own efforts.

Thriller writer Mark Dawson had two novels traditionally published before he decided to go the self-publishing route. He admits his first two novels weren’t given much of a chance to stand out in a competitive market.

From that experience and his background as a lawyer and working for the film industry, he’s applied what he learned to his growing number of self-published novels.

The prolific author of the John Milton series, the Beatrix Rose series, and the Soho Noir series, among others, Dawson earns a six-figure income as a writer. He has seen his novels reach several USA Today bestseller lists.

Another thriller author, Rachel Abbott (aka Sheila Rodgers), was the first indie author to reach the #1 spot on Amazon. In 2015, she became the UK’s bestselling independent author five years running. She also placed fourteenth on the Amazon chart of all authors.

She admits she wrote her first novel, Only the Innocent, for “a bit of fun.” Since then, she’s written at least 11 others and has had her novels translated into over 20 languages.

Rachel now divides her time between her home in Alderney, an island off the coast of France, and the LeMarche regions of Italy, where she devotes her time to writing.

Think of Mark Dawson as the Tom Clancy of self-publishing in that both are pros at penning compelling international thrillers featuring rogue government agents. To continue the analogy, Dawson is to John Milton as Clancy is to Jack Ryan.

Like many successful writers, British-born Dawnson dipped his toes in disparate professional waters before becoming a best-selling novelist. At times, he was a DJ, factory worker, ice cream seller, club promoter, and celebrity attorney.

But when he self-published the first John Milton book — about an assassin-turned-saint striving to redeem his past by helping needy people — his fate was sealed as a novelist.

Dawson also pens the Soho Noir books, focusing on criminal life in London’s West End from the 1940s to the present, and the Beatrix Rose series about a betrayed female British Intelligence agent seeking revenge against her crooked former unit.

When he’s not crafting novels, Dawson hosts a podcast called “The Self Publishing Show.”

With an Oxford degree and 13 successful years in the corporate world, Joanna Penn had achieved what most would label “success.”

But alas, Penn has writer’s blood, so she bravely put aside her “right track” life in 2011 and self-published her thrillers and dark fantasy stories. Ultimately, her efforts paid off, and she grew an audience.

These days, Penn is based in Bath, England. In addition to her fiction, she helps aspiring authors through podcasts and self-publishing courses under The Creative Penn brand.

She’s also written several non-fiction books, including Successful Self-Publishing: How To Self-Publish an Ebook and Print Book, How To Market a Book, and Stop Hating Your Job, Discover what you Really Want to Do with your Life, and Start Doing It!

Alicia Ellis is a mystery and suspense author who writes in several genres, including contemporary, science fiction, and fantasy.

A lawyer by day and author by night, Ellis figured out she had a passion for storytelling at the tail end of law school. But instead of pounding the pavement to find a traditional publisher, she opted to do it herself.

Ellis’s first novel, Girl of Flesh and Metal, won an excellence award from the American Library Association. Today, she has a sizable following devoted to her impressive library of titles.

In addition to a law degree, Ellis earned an MFA in popular fiction writing and two computer science degrees.

Amanda Hocking was an early self-publishing success story. In the early 2000s, Hocking worked at a group home during the day and spent her nights writing. Over several years, she penned 17 books in her spare time.

When 2010 rolled around, Hocking decided to give self-publishing a shot and released her works as e-books. The stories found their audience within a year, and Hocking sold over a million units.

Since then, she’s published over 20 novels, with several landing on the NYT Bestseller list.

What does Hocking write about? Mostly vampires, zombies, and urban fantasy. The New York Times once described her work as “part quirky girl-like-Hocking characters, part breakneck pacing, part Hollywood-style action, and part bodice-ripping romance – they are literature as candy, a mash-up of creativity and commerce.”

Hocking ultimately signed with St. Martin’s Press, but she remains a proponent of the self-publishing model.

Ashwin Sanghi earned a BA in economics from St. Xavier’s College, an MBA from Yale, and then went on to work in his family’s business.

But, like many writers, he couldn’t quash his need to tell stories.

For years, he wrote in his spare time, and in 2007 self-published The Rozabal Line. The DaVinci Code of the Subcontinent, Rozabal was a page-turning thriller incorporating Indian mythology, history, and religion. The book became a smash hit in the country and made Sanghi one of India’s best-selling authors.

Over the years, he’s written nearly a dozen books, including a collaboration with James Patterson for the latter’s Private series. Sanghi now works with traditional publishers but proudly touts his credentials as a successful self-published author.

Will YOU be a self-publishing success story?

Now that you’ve looked through these nine self-publishing success stories, which ones stood out for you? What can you learn from your favorites and apply to your own writing or marketing plan as a self-publishing author?

Spend some time this week outlining your big picture plan for your writing career. Creating a vision board can help with the visual aspect.

Once you have a clear vision of what you want to accomplish, you can break it down into smaller steps and begin taking purposeful daily action.

What will you do today?