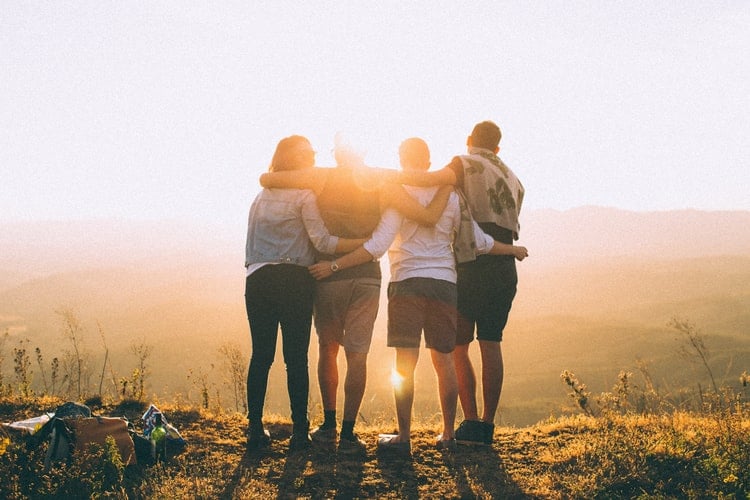 Welcome to our inspired collection of 55 writing prompts for young adults.

You’ll find a variety of characters and scenarios to play with. Choose from different themed groups to find your next story idea more quickly.

Start with one that feels personal to you. Then make it familiar to your reader.

55 Of The Best YA Writing Prompts

We’ve done our research to give you 55 of the best teen fiction ideas. As the writer, you’re free to change any details as you see fit, to make the story more personal to you and more believable to your ideal reader.

1. While learning the true identities of the nursing home residents, a teen volunteer discovers something unexpected about her own and meets an unusual mentor.

2. A teen shifter who was told her twin sister died in childbirth discovers the truth when she escapes her house at night to shift and go for a run.

3. Two teens secretly crushing on each other create a fantasy world for a school writing project and suddenly find themselves lost in it.

4. Anonymous notes in a teen’s locker lead them to a rendezvous with someone who knows their secret identity and wants their help exposing some of the faculty.

5. At her 16th birthday, Maeve accepts her aunt’s gift of a chance to see some of her past lives. She learns why the face of one of her classmates feels so familiar.

6. A teen girl learns the true meaning behind the mark she was born with. Now, she must choose between two teachers with very different ideas about magic’s uses.

7. A teen mage turns heads when it becomes obvious she’s even more powerful than her well-known parents (RIP). Her BFF warns her about rumors going around.

8. Lucia never learned how to swim and is nervous around pools, so when someone shoves her into one at a friend’s birthday party, she’s not prepared for her own transformation. Someone else at the party is.

9. A college freshman finds refuge on the dormitory roof until another student starts hanging out there to practice magic. They agree to keep each other’s secrets.

10. It’s not easy being a shapeshifter whose human form is a teen paralyzed from the waist down. Only in her other, terrifying form is she able to move freely.

11. A teen takes in a stray cat who follows her home. The same cat leads her to an abandoned house where she learns a secret about her past — and her identity.

12. Petra decides to go to the prom in a tux as her cousin’s “date,” and, manifesting abilities she didn’t know she had, she stops a guy from committing date rape.

13. Isa died and came back to life ten years ago. Now, she learns that a tree was involved in her coming back, and recent strange experiences begin to make sense.

14. Whenever she’s under duress, a strange song plays in her mind. When she says the words aloud, strange things happen. And this time, she’s the only survivor.

15. A teen switches bodies with her 50-year-old neighbor and learns disturbing truths when looking through the woman’s possessions. Meanwhile her teen body is up to nothing good.

16. At your first job, you witness strange phenomena, but your boss tells you to keep your head down and check things off the list. Too curious, you find a hiding spot.

17. Soraya, a withdrawn sophomore, turns 16 and starts seeing an unfamiliar face in her dreams. A new “exchange student” comes to class, and she meets the face..

18. She wants to meet her birth mother, and he’s willing to drive her there in secrecy. They end up stranded together when his car breaks down 100 miles from home.

19. A teen glrl develops a flair for cosplay and takes on the personalities of the characters she becomes. One of these character’s fans pursues her.

20. A teen growing up in a devout Christian home falls for an outspoken atheist and grapples with her religious beliefs and sexual orientation.

21. She sees his face in her head and doesn’t know why he’s so important to her. They’ll never meet. Only when she writes about him does he come alive and speak to her.

22. Two young athletes on competing teams develop romantic feelings for each other. Their coaches are bitter rivals.

23. A quiet, hardworking student by day, Dax takes on a different identity at night. And that’s when he meets the only person who can help him find balance.

24. Sixteen-year-old Tess is the butt of cruel “fat” jokes until a boy humiliates the jokers and walks her home. They see each other and become more than friends.

25. Declan McGregor never thought he’d take in a stray, but when “Boss” follows him home, he decides to help the mutt, whose human turns out to be his nemesis.

26. A reclusive junior develops a crush on a flirt, who befriends her, only to find out he was acting on a dare. Then she finds out who dared him and why.

27. She gives good advice through an anonymous advice column in the school paper, but when she meets one of the students she “helped,” she realizes her mistake and tries to fix it.

28. A quiet girl who keeps her home life secret takes up boxing and becomes more confident and outspoken, drawing the attention of someone who knows her family.

29. An asexual teen starts questioning her identity when she responds in surprising ways to a face that keeps showing up in her dreams. Then she meets the face.

30. Working her first night shift, an 18-year-old discovers a secret passageway in her employer’s office — and ends up encountering his socially awkward son.

31. A teen with Asperger’s finds an unexpected friendship with one of the popular kids after standing up to a bully and ending up in the principal’s office.

32. An infamous teen flirt stands up for a trans boy when classmates play a cruel prank on him. They befriend another student whose home life is dangerously chaotic.

33. A boy learns something terrible about his parents and confronts them about it. They send him to live with his uncle in New York, where he meets his first crush.

34. As a child, she wandered away from home and was brought back by a friendly stranger. Now, she learns the family she’s known for most of her life stole her.

35. As a teen apprentice to a 15th-century artist, your work experience challenges childhood beliefs, especially when you develop a crush on one of the models.

36. You’re coming of age in Victorian England, and your parents want you to marry someone you dislike. Meanwhile, the butler’s son has been your friend for years.

37. A city kid struggles to adjust to life in a farming community when his parents move back to his mom’s hometown after his dad disappears.

38. Her boyfriend just told her he’s been drafted for the Vietnam war, and “we might never see each other again.” She writes to him as her teen pregnancy progresses.

39. A teen stows away on a ship to escape his oppressive government after his family is killed to set an example. He becomes a valuable member of the crew.

40. A homeless teen finds a secret hiding place in the library that leads to an abandoned underground network of tunnels, where some have made a life.

41. A sheltered teen befriends a refugee who challenges the ideas she picked up from her family. When ICE comes to the school, she risks everything to help him.

42. Growing up as a plantation slave was hard enough before his only parent mysteriously disappeared. Now, he and another will risk everything to escape.

43. You want to believe your parents when they tell you they’ve been abducted by aliens, but your whole school knows about it and whispers behind your back.

44. A popular student whose parents work as youth pastors learns something during a scouting trip and decides to come out one evening at a youth group meeting.

45. A high school junior is raped by her popular boyfriend and falls into a deep depression when she’s blamed for it by everyone but her best friend.

46. When a social outcast moves to a new school, she changes her whole look and creates a new “life history.” She becomes popular, but the truth catches up.

47. An adopted girl finds out she’s from a set of fraternal triplets; her siblings happen to be the “mean girls” making her life as a freshman miserable.

48. A high school junior struggles with her academic workload while doing their best to protect their younger siblings from their abusive parent.

49. A sophomore struggling to provide for his siblings grows marijuana and sells it to customers on the dark web, while providing some to his ailing grandfather.

50. A freshman with a knack for app development creates an app that makes her the most popular student and attracts the attention of the government.

51. Her older brother was dead, and the cop who killed him wasn’t charged. Her brother’s crime? Walking alone through a white neighborhood.

52. A teen born in the U.S. to immigrant parents is graduating with her class when ICE shows up to arrest her parents, and she can do nothing to stop their deportation.

53. Your dream is to become a famous tattoo artist, creating inspired designs for wealthy patrons. An unpopular neighbor gives you your first tattoo.

54. A teen who just wants to be “normal” struggles with a diagnosis of bipolar disorder and befriends a classmate struggling with addiction recovery. They make a pact.

55. One teen hospitalized with anorexia goes through eating disorder treatment and wonders if she’ll ever feel happy or even functional again. More than anything, she wants to go back to residential care, where she felt happiest.

Ready to write your YA novel?

Now that you have 55 young adult creative writing prompts to choose from, which one makes you want to stop everything and write?

You’ve heard the advice, “Write what you know,” and it makes sense. But don’t forget to write what your reader knows, too.

Make the setting and characters feel familiar, so they can easily see what’s going on.

Using these YA writing prompts can help you get started on a story your young adult readers will fall in love with and recommend to their friends.

Pick one today and start writing.