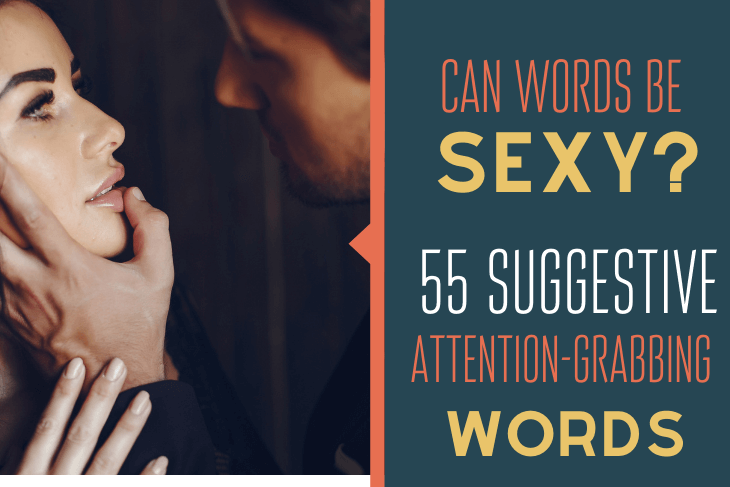 When you’re creating a specific mood with your writing, every word has to earn its place.

If the mood is sexy (and yes, that’s an option), it can’t hurt to have a sexually suggestive words list on hand.

You want the mood to enter your reader’s consciousness without overwhelming them.

What Is the Sexiest Word in the English Language?

The sexiest word in the English language is not “yes,” though that is often the goal. The word that takes the crown is “no,” making the “yes” worth more.

Think of how the following phrases make you all the more curious about something:

All of these imply that many—even most—will hear the word, “Sorry, no, this isn’t for you,” or “You’re not on the list.”

When even celebrities are turned away disappointed, the value of the thing they’re not able to get rises to the stratosphere.

Welcome to the sexiest words list — with 55 suggestive nouns and adjectives. Keep a copy for yourself (with Pocket or Evernote), and feel free to highlight the ones that stand out for you.

1. Alluring — Able to arouse desire in another; attractive; compelling

Example: She sauntered into the living room, wearing the dress, and gave me the most alluring wink and smile I’d ever seen.

Example: As a surprise, he ordered her a birthday dessert well known as an aphrodisiac.

Example: I’ve yet to find an author who could match her gift for building sexual tension. I read her novels in a near-constant state of arousal.

4. Bold — Daring or audacious in appearance or behavior

Example: She’s a bold one to wear an ensemble like that to work, but, then… with her, it kind of works.

Example: You are, by far, the most bodacious queen I’ve ever laid eyes on.

Example: I’m watching The Great, and the word bawdy is one of many adjectives I would use to describe it; another is brilliant.

7. Creamy — Having a smooth appearance or texture

Example: She savored the creamy dessert in a way that stirred his imagination.

8. Delicious — Highly or exceptionally pleasing to the senses—especially taste or smell

Example: No one could be more surprised than I was when the first word that came to mind at the sight of him—my oldest and most trusted friend—was “delicious.”

9. Desirable — Exciting a sudden and undeniable desire or longing

Example: She was mistaken in thinking no one in her small, isolated community found her desirable.

Example: Don’t ask me to say whatever’s on my mind. My thoughts are too dirty to articulate in front of my parents.

Example; Her disheveled hair unraveled what little remained of my self-control.

Example: His knowledge of erogenous zones did him credit; I forgot everything else within seconds.

14. Exciting — Stimulating or rousing into action or readiness

Example:  His speech proved more exciting than either of us had anticipated.

15. Flirty / Flirtatious — Playful in a way that implies sexual attraction

Example: No one would describe his body language toward her as flirtatious, but she evidently saw something no one else did.

16. Hot — Giving off or transferring a high degree of heat through touch or proximity

Example, I never really thought of him as hot until he unexpectedly showed up that evening and greeted me with a smile that liquefied my insides.

17. Improper —The opposite of proper; violating conventional mores

Example: Improper though it was, we enjoyed every second of it.

18. Indecent — Offensive to accepted standards of modesty or decency

Example: The outfit she wore to her cousin’s funeral bordered on indecent, but she swore she was honoring a personal request–the details of which she kept to herself.

19. Insatiable — Unable or unlikely to be satiated or satisfied

Example: Once they finally found each other, the two were insatiable. And the walls were thin.

20. Intimate — Having a deeply emotional, spiritual, or physical connection

Example: We had an intimate evening together, and for the first time, I felt that he really knew me–and loved all of me, not just the parts he could use.

Example: I could watch his kissable face for hours, but I can’t guarantee I’ll hear anything over my inappropriate thoughts.

Example: He walked right up to her with a lascivious grin on his impeccably groomed face.

23. Libidinous — Having or exhibiting a robust libido or lustful desires

Example: Women of my age and marital status aren’t supposed to be libidinous, but here we are.

Example: She used the word “lubricious” once to describe him, and I’ve hated that word ever since.

Example: One look at that luscious mouth, and I forget everything but wanting to be close enough for a kiss.

Example: I knew lust when I felt it, though I hadn’t felt it for years. He reminded me.

Example: I didn’t think she was capable of being naughty until I found myself alone with her.

28. Nubile — Sexually mature or of an age suitable for marriage

Example: He and his wife moved into the neighborhood with their three nubile daughters.

29. Passion / Passionate — Passion wakes up the senses, particularly those related to love, lust, and hunger

Example: We get along well, but there’s no passion in our marriage. I think there used to be, but I don’t remember.

How To Write Erotica: The Ultimate Guide

30. Pleasure / Pleasurable — Something that appeals to the senses and is enjoyable

Example: He takes more pleasure in her company than he does in anything else.

31. Plunging — Diving or implying a precipitous, downward motion (or drop in focal point)

Example: Her new dress has a thigh-high slit and a plunging neckline.

32. Pursue / Pursuit — to follow in order to capture, overtake, or seduce

Example: She entered the room, and, within seconds, he was in pursuit.

Example:  I’m called promiscuous (or worse), while he gets compliments and pats on the back.

34. Prurient —Appealing to or arousing an over-the-top interest in sex

Example: She writes novels of a prurient nature, using a pseudonym to shield her disapproving relatives from awkward questions.

Example: To say you look ravishing is a hint at what I’m thinking right now. I’m all yours.

36. Rough — Course or stubbly to the touch; the opposite of smooth or easy

Example: He cleans up nice, but, it turns out, his rough, unshaven morning face plus the smell of campfire smoke in his clothes is like catnip to her.

Example: The salacious details of their weekend together would light the entire neighborhood on fire.

Example: She wore her most seductive dress, paired with her favorite stilettos, and sauntered down the hall to his office door.

39. Sensual — Sexually attractive or gratifying to the senses; preoccupied with gratification of the senses

Example: She’s a sensual person, which gets her in trouble sometimes. It’s why she teaches self-defense classes.

40. Sensuous — Synonym for sensual; affecting or gratifying the senses

Example: She wears only sensuous fabrics, her favorites being silk and cashmere.

41. Silky — Made of or resembling silk; smooth and lustrous

Example: Her silky hair and luminous skin called out to me. I waited until we were alone to ask if I might touch her cheek and leave her with a kiss.

Example: Her slinky dress moved with her and reflected the light as she walked.

43. Spicy — Having the flavor, scent, or heat of spices; zesty; producing or abounding in heat

Example: From her usual demeanor, no one would guess how spicy her writing could be.

Example: In her opinion, no romance novel was complete without several steamy love scenes.

Example: Her outfit was the perfect compliment to her sultry mood. He was there for both.

46. Stimulating — Quickening to the senses; exciting or arousing

Example: He knew exactly what he was stimulating, and she trusted him enough to surrender to it.

47. Tantalizing — Tempting or teasing but just beyond reach; arousing desire or expectation

Example: She wore a smile as tantalizing as her outfit, which I hoped she was wearing just for me.

48. Tempting — Teasing or tantalizing; arousing desire and pushing the limits of self-control

Example: What I found most tempting walked in just then and smiled when our eyes met.

49. Thirsty — Feeling a need for something that hydrates or quenches heat

Example: I get thirsty just looking at him, though it makes no sense.

50. Thrusting — Pushing with force or urgency to penetrate or drive something home

Example: All this talk of thrusting is making it very hard to get any serious work done.

Example: The way his warm fingers briefly touched the back of her neck when fastening the clasp felt more titillating than she dared acknowledge. She would think about it later.

52. Tussle — To struggle roughly or engage in a playful scuffle

Example: What began as sparring between them became a tussle on the floor, which both seemed to enjoy, but which their respective dates did not.

Example: Her voluptuous figure made the most of the dress’s flirtatious design. Every woman in the room dazzled, but to him, she was the main attraction.

54. Willing — Ready to acquiesce; showing an inclination to say “yes” in word or action

Example: He was a willing participant in her game, and she found she was mistaken to think she was the one in control—or that she wanted to be.

55. Yes — An affirmative answer to a request or directive

Example: She’d said “no” every time until now, and he saw her tongue move as if to repeat the word before it died on her lips. She gave a quiet “yes,” and the rest of the world disappeared.

Now that you have this list of 55 sexy words use as many of them as you like to sprinkle some spicy magic into your writing—especially if your current work in progress has an element of romance.

If reading through the list with their definitions and examples had the kind of effect you want your writing to have on your readers, we’d consider this post well worth the time spent.

Use this power for good.