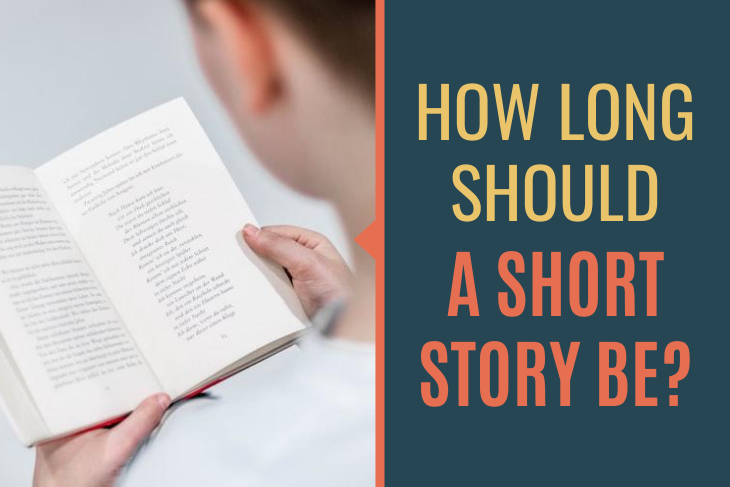 How long can a story be before it’s no longer a short story?

Or what’s the maximum short story length for flash fiction?

If you’re a fiction writer, you’re already familiar with the distinction between short stories, novellas, and novels.

But now that short stories themselves have sub-species of different lengths, how do you know which is which?

Do those stories you see in your Twitter feed from fellow writers qualify as short stories?

In other words, if there’s a maximum length for a short story, is there also a minimum one?

What is a short story?

What makes a story a short story — as opposed to a random thought (at the short end of the spectrum) or a novelette?

The length of a short story isn’t its only defining characteristic, but it’s a decisive one. Most short stories stop at around 7,500 words, though there’s some wiggle room.

As for minimum length, stay tuned.

How long is a novel?

Let’s start with the longest and work our way down. Depending on the genre, novels start at 50,000 words and go up from there. Fantasy and science fiction novels tend to be the longest at around 100K and up to 120K.

On the other hand, Cozy mysteries tend to be on the shorter end of the spectrum — closer to 50K.

Besides the obvious difference in word count, what sets short stories apart from novels?

How long is a novella?

Some genres, like romance and cozy mysteries, sell better at those shorter lengths.

Here are some examples of novellas:

How long is a novelette?

As such, they’re often too long to submit to a literary journal but too short to market as a print book, given the thinness of the spine (even in smaller trim sizes).

This story length would probably do best in ebook form. If it could be part of a series, you’ll likely sell more copies if you publish the entire series in one book (ebook or print).

Here are some examples of novelettes:

How long can a short story be?

There’s some room for haggling, but the previously mentioned 7,500 words are generally as long as short stories get.

Some can go as high as 10,000, but they’re the outliers in the short fiction world.

Here are some examples of short stories:

How long is a flash fiction story?

Short stories also come in short-shorts, which are divided into flash fiction and micro-flash or micro-fiction.

Even micro-fiction is divided into different types. For example, “55 Fiction” is exactly what it sounds like: a work of fiction exactly 55 words long.

“Drabble” fiction is 100 words long, and I’m sure you can guess the word count for “69er” fiction. And Twitter fiction can’t be more than 280 characters long.

If shooting for a specific word count makes you feel blocked, though, go for something that gives you as much room as you need. Writing a good story is challenging enough.

But don’t be afraid to try something new, either.

If you connect with other writers on Twitter, you’ve probably had a fair sampling of micro-fiction, and maybe you’ve written and shared some of your own. If so, good on you.

Here are some examples of flash fiction:

How To Write Dialogue In Your Novel Or Story

Rules for dialogue don’t change much when you’re writing a short story instead of a novel. The main difference between them is that the shorter the story, the more important it is for every word of dialogue to earn its place.

Compare, for example, an exchange of witty banter between two love interests in a light-hearted romance novel with the combination of concentrated dialogue and brief, symbolic description in a short story like Ernest Hemingway’s Hills Like White Elephants.

Nothing is there that doesn’t help communicate the story’s message.

How is marketing different for short stories?

It’s not that longer stories are better than short ones. In fact, as you learn more about the latter, some short stories stay with you longer than most of the popular novels out there.

Short doesn’t mean shallow — or low-impact. In fact, because you have fewer words to work with, it’s even more important to make every one of them count.

That said, your best shot at getting eyes on your story is by getting published in a literary magazine. Here are a few paying markets to consider:

Aside from the pay, getting your story published in a literary journal gives you an edge when it comes to pursuing traditional publishing for your work.

Even if that’s not the goal, though, getting your story published in a respected journal gives you serious bragging rights.

Keep in mind, though, that literary journals have strict word count limits. Respect those limits, and you’ll get at least one new set of eyes on your work.

Abundant as short stories are, this genre still raises many questions for writers and readers alike. Here are a few that keep coming up.

How many pages are a short story?

Story length is all about word count — not pages. Page size can vary quite a bit, and so can margins and text formatting, both of which affect how many words will fit on a page.

The same goes for the question, “How many pages is a novella — or a novelette — or a novel?” When measuring the length of your work, word count is the industry standard.

Given the average preferred length of 250 words per page, though, the standard length for a short story is anywhere from 1 to 30 pages (using 7,500 words as the maximum).

As mentioned above, short stories can be as long as 7,000 (give or take), so yes, 2,000 words is plenty long enough. The real question is whether those 2,000 words are all necessary to your story — or whether some added content would make it even better.

What qualifies as a short story?

If what you’ve written is a real story — with at least one character, a beginning, a middle, and an end — and the word count falls at 7,000 words or fewer, it qualifies as a short story.

Aside from that, something has to happen with the main character, internally or externally, that the reader is likely to find interesting.

Is 500 words enough for a short story?

You’ll see some great examples in the list below, but short stories can be much shorter than 500 words and still qualify as short stories.

Many are even short enough to fit in a tweet or — in the palm of your hand.

Ready to write your short story?

Now that you know the ballpark numbers for different types of short fiction, which ones have you written more of up until now?

And what new story lengths would you like to try?

Or maybe you’ll cut a neglected novel of yours down to flash fiction length. Maybe that’s just what it needs.

Whatever you do as you play with your stories, let the words flow just as they come into your head. Enjoy the process, and use as many words as you need.

And may your creativity and sense of adventure influence everything you do today.