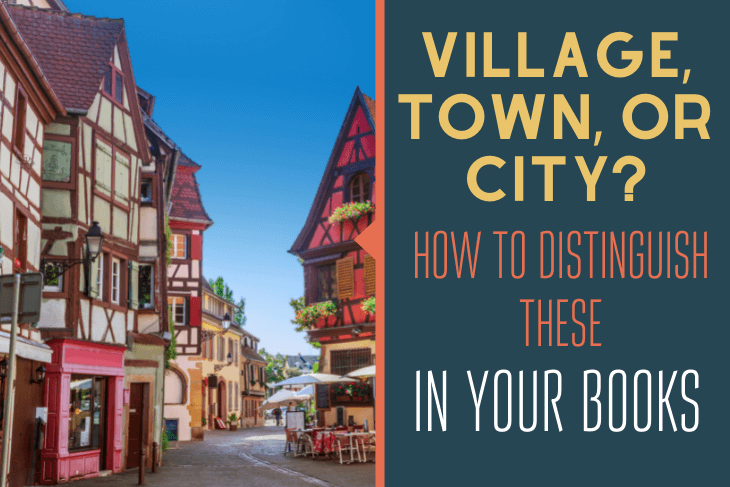 You know where your characters live and the places they visit in your story.

You can picture the places clearly.

But how do your readers know whether your main character lives in a village, town or city?

And how do you make sure they see your setting as clearly as you do?

What is the population of a village, anyway?

Or, in a village vs. town question, how do you distinguish the two?

Town vs. Village: What’s the Difference Between a Village and a Town?

At what point does a village become a town? While size often differentiates the two, it’s more helpful to look at what a town has that a village does not:

Villages are generally a group of homes administered by someone in the nearest town or city. Population is generally smaller than for a town, and business owners often, by necessity, operate outside the village in nearby municipalities.

Towns and cities also have local businesses you won’t find in a typical village — including stores, restaurants, and pubs.

And while a village may have a primary and even a secondary school, residents typically have to go to a nearby town or city to attend college.

It’s possible, though, for a village to grow and develop its own local government and decide on its boundaries to determine who is a resident and who is not (for taxing, etc.).

Town vs. City: What’s the Difference Between a City and a Town?

What determines a city from a town? From a distance, size seems to be the biggest factor, but the differences go beyond that.

Town sizes vary, depending on where you are. Some towns are large enough to look like cities to people from different areas. Others are more rural and relatively isolated from major metropolitan areas.

Consider the following examples of towns:

The town vs. city question is trickier since both have local governments and established boundaries. So, how do you differentiate the two?

So, even though Belgium is considered more “urbanized” than Japan — at 98% vs. 92% — a closer look at the differences in what each country considers urban makes that comparison virtually meaningless.

Here are some more examples:

From a global perspective, the word “urban” is relative. Denmark’s largest city, Copenhagen — with a population of 794,203 — looks very different from Tokyo, Japan.

Both cities meets local standards for minimum population and infrastructure. But Tokyo is more densely populated. Life in Denmark moves at a slower pace (the word “hygge” is Danish, after all). But it still has enough attractions to rival many of the world’s larger cities.

What about your chosen setting would most appeal (or repulse) foreign visitors?

The Difference Between Tone and Mood In Writing

City vs. Town vs. Village: How to Choose One for Your Writing

Once you know how to differentiate cities from towns and towns from villages, how do you choose the best one for your story?

Since your setting is a character all its own, which one would be the best complement to the characters in it? Which would contribute the most to their development?

One way to find out is to brainstorm scenarios with your characters in each of three options. Another is to ask yourself questions like the following:

Will your characters live in a village, town, or city?

Now that you’ve looked through the differences between cities, towns, and villages, which one appeals to you most as the setting for your story?

Once you’ve chosen your setting, you can add more specific information to paint a clearer picture for your reader. The more clearly they see it, the easier it is to step into your story’s world and stay awhile.

Make it a place they’ll want to remember.