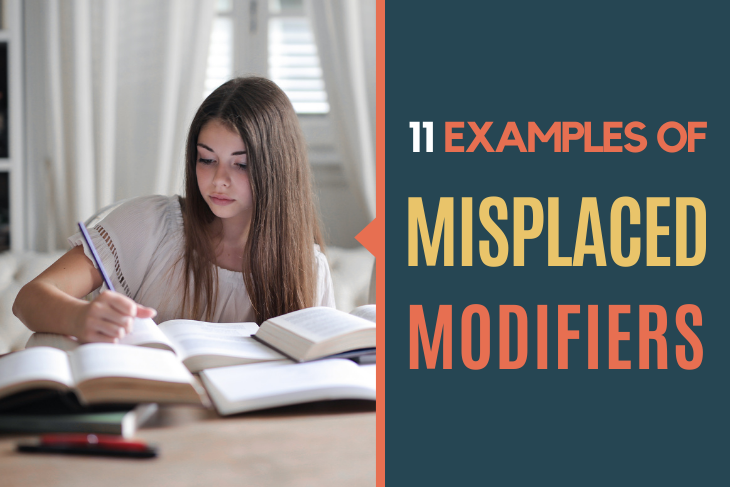 The best, most enjoyable writing is clear, simple, and elegant.

But when one of your modifiers is misplaced, clarity goes out the window. And so does the reader’s enjoyment.

But do you know how to spot a modifier error — and how to fix it when you see it?

Once you read our 11 examples of dangling and misplaced modifiers, you will.

What is a misplaced modifier?

A modifer is a word or phrase that describes a noun in the sentence.

If there are multiple nouns that could be modified, it makes sense to put the modifer close to the one it’s describing.

A misplaced modifier is positioned so that it appears to modify a noun other than the one it’s meant to describe.

The right noun is in there, but its modifier is off flirting with another.

So, what’s the difference between dangling and misplaced modifiers?

With dangling modifiers, the noun it’s supposed to modify isn’t even in the sentence. You’ll see more examples of these in another post.

Fortunately, we have ways of dealing with both misplaced modifiers. And the following examples will show how.

Once you know how to spot a misplaced modifier, it’s a cinch to put it where it belongs — as long as you know exactly what you’re trying to say.

If you’re the author, you probably do. Even you’re editing someone else’s work, you can probably guess the most likely meaning.

Otherwise, you can either get clues from the surrounding context or ask the author for clarification.

“Asleep on top of the refrigerator, Marilyn couldn’t find her cat. “

Since Marilyn wouldn’t be looking for anyone if she were asleep, we can guess that “her cat” is the one “asleep on top of the refrigerator.”

Plus, who could sleep up there will all the cereal boxes and potato chips?

We can fix this by rephrasing the sentence in one of the following ways:

“I wore my favorite pants to the job interview, which accidentally picked up road salt from the side of my car.”

The job interview didn’t pick up road salt from my car; my pants did.

We can fix this by rephrasing the sentence in one of the following ways:

Mireille is probably not the one topped with roses — but this sentence makes it sound as though she could be.

To make it clear that the roses are decorating the cake instead, we can rephrase the sentence this way:

“Suddenly bereft of company, the car felt cold and empty to Elaine.”

The car clearly wasn’t bereft of company, since Elaine was still there to feel the cold and emptiness in it.

To make it clear who feels bereft, we can rewrite the sentence in more than one way:

“Hanging off the edge of the roof, Larry couldn’t quite reach his glasses.”

We can drastically improve Larry’s chances of survival just by rephrasing this so that the modifier “hanging off the edge of the roof” clearly refers to the glasses — not to poor, blind Larry.

A limiting modifier is one that expresses some sort of limit. The most common are almost, hardly, just, merely, nearly, and only.

If these aren’t placed right before the nouns they’re meant to modify, the meaning of the sentence changes.

The first sentence means David wants dessert and nothing else.

The second sentence means David is the only one who wants dessert — no one else does. More for David.

Are You Ready To Test Your Proofreading Skills?

How Many Words Should Be In A Chapter Of A Book?

The first sentence means Tim actually did lose money — to the tune of nearly $10,000.

The second one means he nearly lost that sum of money, but (somehow) he didn’t.

Just putting the “nearly” before the verb (lost) rather than the object ($10,000) saved Tim a whole lotta money.

“Almost everyone left” vs. “Everyone almost left.”

The first sentence means almost everyone did leave. But the second one means they almost left — but didn’t.

Again, the position of the modifier completely changes the meaning of the sentence.

Just putting the modifier “almost” right before the verb (left) rather than the noun (everyone) keeps everyone from leaving.

Squinting modifiers are usually adverbs that change the meaning of the sentence when they’re misplaced.

“Running up and down the stairs rapidly exhausted me.”

This sentence could mean two things:

If we mean the former, we can make this clearer by putting the adverb “rapidly” right before the action it’s meant to modify:

“Rapidly running up and down the stairs exhausted me.”

“Sadly she left the building before they announced her award.”

With or without a comma after “sadly,” this sentence could mean two things:

We can make it clearer by rephrasing it in one of these two ways:

“Reading the book quickly gave me a headache.”

We can rephrase this sentence in two ways to get two different meanings:

With the first one, the speaker blames speed-reading for the headache. With the second, the book itself is to blame.

You could even blame both by saying the following:

“Speed-reading this particular book gave me a headache.”

[To be fair, plenty of good books don’t lend themselves well to speed-reading.]

Remember these misplaced modifier examples when you’re writing your book.

Now that you’re better acquainted with misplaced modifers and how to fix them, you’re much better equipped for the self-editing stage of your book writing process.

And if you’re interested in working as a professional editor, you’ve just learned something that can help make you indispensable to your clients.

Misplaced and dangling modifiers can be funny.

But when you’re writing something you want your readers to take seriously, if they laugh at all, you want them laughing with you — not at you. That’s where clarity comes in.

The more easily you spot these misplaced modifier errors (in your writing or someone else’s), the more efficiently you can transform confusing sentences into clear ones.

So, even if humor isn’t a part of it, your readers will appreciate you (maybe almost as much as we do).