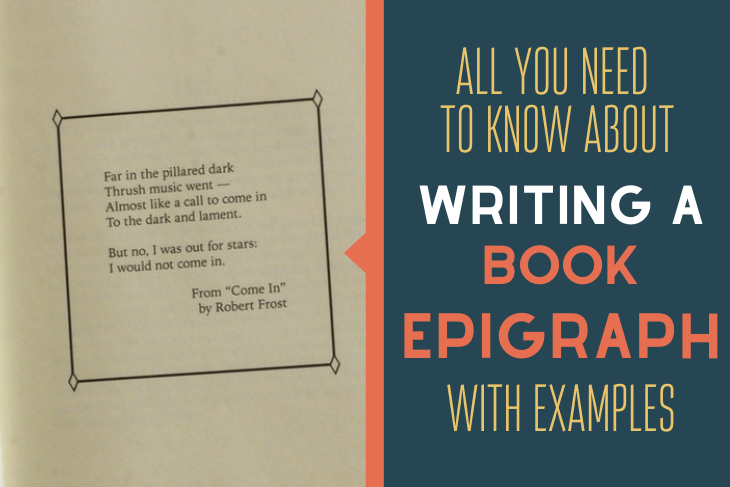 You’ve run across epigraphs that made you smile — and some that sent a chill up your spine.

You have some idea of what it is, but what purpose does an epigraph serve?

You’ve felt the words of a well-chosen epigraph draw you in immediately, setting a specific mood, foreshadowing elements of a story, or hinting at a theme.

How do you create the same magic for your book?

Read on to find out.

What Is An Epigraph?

Simply put, an epigraph is a brief quote — typically a line, poem, or small excerpt — that appears at the beginning of a book.

If your book has multiple parts, each part can begin with its own epigraph. You can even give one to each of your chapters.

What does epigraph mean? The word comes from the Greek epigraphein, which means “to write on,” which seems to allude more to the epigraph’s other meaning, “an engraved inscription.”

Authors usually borrow quotes from existing works, but epigraphs can also be original work, including poems of lore (as in The Fellowship of the Ring) or quotes from the author’s own story characters.

Why Does a Writer Include an Epigraph?

What purpose does an epigraph serve, aside from the main goal of adding value to your book and drawing your reader into the narrative?

Your choice of epigraph can help you communicate your chosen genre — or your particular twist on it. But it can do more:

Many authors use epigraphs to give homage to a key influence in their life or career, or someone who inspired the specific book in question.

A well-chosen epigraph makes you, as the author, appear not only well-read but aware of connections between your book and its related predecessors.

What’s the Difference Between an Epigraph and Epigram?

Two words that often get confused with each other are epigraph and epigram. As you’ll soon see, the two are different in important ways.

The key difference lies in their defining traits:

The key trait of an epigraph is its location at the beginning of a written work.

Some epigraphs are also epigrams, but not all.

Where Is an Epigraph Found?

As a rule, you’ll find epigraphs at the beginning of a text. If it’s in your book’s front matter, it should be the last thing you see before starting the first chapter.

Some authors include epigraphs for each separate part of their book. Others give each chapter an epigraph of its own, centered or indented at the top, just below the chapter title (and subtitle, if you have one).

Books aren’t the only publications with epigraphs. You’ll also find them in academic writing or as openings for short stories and essays.

How to Write an Epigraph for Your Book

If you’d like to use an epigraph, follow these tips to choose the right one (or ones) for your book:

If you use an epigraph in your book, keep the following rules in mind for epigraph format:

Keep in mind that, ultimately, you, as the author, decide on the formatting and placement for your chosen epigraph/s.

Finally, remember to get permission from the author or copyright holder to use the epigraph in your book. As long as the work is still copyright-protected, asking permission to use someone else’s intellectual property is always right.

If they refuse that permission, you’re better off not quoting them in your book.

Read through the following epigraphs to see how they set a mood or tone, provide context, or allude to a larger theme in the book. We hope they inspire you.

Example #1 from The Fellowship of the Ring by J. R. R. Tolkien

Example #2 from Frankenstein by Mary Shelley

“Did I request thee, Maker, from my clay
To mould me Man, did I solicit thee
From darkness to promote me?

The Definitive Guide To All Parts Of A Book

Let’s Clear This Up: Should You Underline Or Italicize Book Titles?

Example #3 from The Handmaid’s Tale by Margaret Atwood

“And when Rachel saw that she bare Jacob no children, Rachel envied her sister; and said unto Jacob, Give me children, or else I die.

And Jacob’s anger was kindled against Rachel; and he said, Am I in God’s stead, who hath withheld from thee the fruit of the womb?

And she said, Behold my maid Bilhah, go in unto her and she shall bear upon my knees, that I may also have children by her.

And one morning while in the woods I stumbled suddenly
upon the thing,
Stumbled upon it in a grassy clearing guarded by scaly oaks
and elms
And the sooty details of the scene rose, thrusting themselves
between the world and me…

—Richard Wright “Between the World and Me”

Example #5 from On Writing: A Memoir of the Craft by Stephen King

Note that in this last example, the author’s names are not right-justified — which works, given the brevity of the quotes.

Now that you’re an expert on epigraphs, their purpose, and their formatting, we’re betting you have some ideas for your current work in progress.

If you’re not sure which quotes, poems, or excerpts to use, you can always poll your launch team on social media (or email) to get their feedback. If there’s no clear winner, go with your gut.