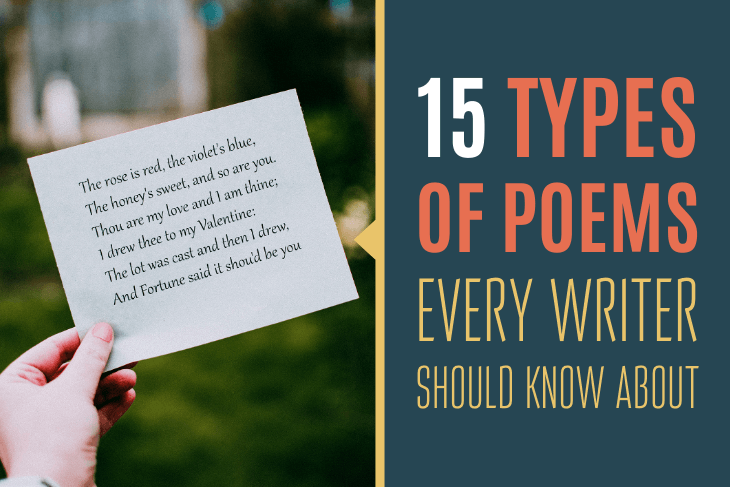 Poetry is a skill that every writer should at least dabble in. Rhymed or not, poetry writing is a chance to express what you’re feeling or sensing in the most potent way possible.

Whether you intend to specialize in poetry or just improve your skills, you should start by learning the different types of poems.

Poem formats vary, depending on the type, as you’ll see in the list below.

Get acquainted with the following 15 poem types. You’re bound to recognize some favorites or feel inspired to create your own.

Limericks are light-hearted and often funny, but their form, meter, and rhyme scheme are nothing to take lightly.

The rhyme scheme is the same for every limerick: AABBA, as you’ll see in the following example.

Into space that is quite economical,

But the good ones I’ve seen

So seldom are clean

And the clean ones so seldom are comical.”

Sonnets come in two different types: the Petrarchan and the Shakespearean, named after the poets who made them famous.

Petrarchan sonnets have two stanzas and a total of 14 lines with the rhyme scheme: ABBA, ABBA, CDECDE.

I met a traveler from an antique land,

Who said—“Two vast and trunkless legs of stone

Half sunk a shattered visage lies, whose frown,

And wrinkled lip, and sneer of cold command,

Tell that its sculptor well those passions read

Which yet survive, stamped on these lifeless things,

The hand that mocked them, and the heart that fed;

And on the pedestal, these words appear:

“My name is Ozymandias, King of Kings;

Look on my Works, ye Mighty, and despair!”

Nothing beside remains. Round the decay

Of that colossal Wreck, boundless and bare

The lone and level sands stretch far away.

Invented by the late 17th-century poet Jean Passerat, the villanelle is a French form. But most well-known villanelle poets are English: Oscar Wilde, Austin Dobson, and Edwin Arlington Robinson, to name a few.

Example — Excerpt from “Do Not Go Gentle into That Good Night,” by Dylan Thomas

“Do not go gentle into that good night,

Old age should burn and rave at close of day;

Rage, rage against the dying of the light.

Though wise men at their end know dark is right,

Because their words had forked no lightning they

Do not go gentle into that good night.

Good men, the last wave by, crying how bright

Their frail deeds might have danced in a green bay,

Rage, rage against the dying of the light…”

Ballads are another “fixed form” in French lyric poetry, developed in the 14th and 15th centuries by minstrels. They have 4-line stanzas with an ABAB or ABCB rhyme scheme. You’ll find this form often in folk ballad poetry, typically in iambic pentameter.

“The first flower of the spring is not so fair

Or bright, as one the ripe midsummer brings.

Is not as rich with feeling, or so rare

As when, full master of his art, the air

Drowns in the liquid sea of song he flings

Like silver spray from beak, and breast, and wings…”

With haikus composed in Japanese, the 5-7-5 syllable structure often gets lost in the translation.

Example — “A World of Dew” by Kobayashi Issa

A world of dew,

And within every dewdrop

A world of struggle.

An epigram is either a rhetorical device or a brief, memorable statement. It has no rules regarding structure, meter, or rhyme, though you’ll occasionally see one in couplet or quatrain form. The point of an epigram is to get people thinking — or laughing.

“Raise your words, not your volume. Rain grows flowers — not thunder.” —Rumi

“These Strangers, in a foreign World,

Protection asked of me―

Befriend them, lest Yourself in Heaven

Be found a Refugee.”

The epitaph is a shorter version of an elegy, commonly seen on gravestones (no specific rules for rhyme schemes). An epitaph can also be the final part of an elegy, as in Thomas Gray’s Elegy in a Country Churchyard.

Example — The Epitaph from Elegy in a Country Churchyard:

“Here rests his head upon the lap of Earth

A youth, to Fortune and to Fame unknown;

Fair Science frown’d not on his humble birth

And Melancholy mark’d him for her own.

“Large was his bounty, and his soul sincere;

Heaven did a recompense as largely send:

He gave to Mis’ry all he had, a tear,

He gain’d from Heaven, ’twas all he wish’d, a friend…”

First-Person Vs. Third-Person: All You Need To Know

Other Types of Poems

Concrete poems take a particular representative or symbolic shape on the page, which is part of the poem itself.

These are generally free-verse poems written to communicate something of their meaning at first glance. Each well-composed concrete poem is a work of art in two distinct but interdependent ways.

Named after an ancient Greek poet, Pindar, the classic ode contains three triads: the strophe (first few lines), the antistrophe (next few lines, with a thematic to counterbalance the strophe), and the final stanza as epode.

The purpose of an ode is to express emotions using lyrical stanzas with irregular rhyme patterns. The modern ode has evolved to include a variety of styles and forms. While many odes rhyme, this particular form is not required to.

Example — Excerpt from “Ode to a Nightingale” by John Keats

“My heart aches, and a drowsy numbness pains

My sense, as though of hemlock I had drunk,

Or emptied some dull opiate to the drains

One minute past, and Lethe-wards had sunk:

‘Tis not through envy of thy happy lot,

But being too happy in thine happiness,

That thou, light-wing’d Dryad of the trees,

In some melodious plot

Of beechen green, and shadows numberless,

Singest of summer in full-throated ease…”

Originating in the ancient Greek tradition of “elegieia,” an elegy is typically a lament for the dead. It usually relates to mourning and loss, though it can also touch on redemption and consolation.

Rhyme schemes have varied from the original couplets to the more varied choices used in modern elegies. And while elegies often do have rhyme, they’re not strictly required to.

Example — Elegy Written in a Country Churchyard by Thomas Gray:

“The curfew tolls the knell of parting day,

And leaves the world to darkness and to me…”

An epic poem is a lengthy narrative work, usually written to recount extraordinary feats from the past in elaborate detail. It typically follows a hero’s journey and describes their adventures. And it begins with an invocation of a Muse.

The meter depends on cultural custom. Generally, though, these poems are written in a formal style with third-person narration. Think Homer’s The Iliad or The Odyssey (Greek) — or Beowulf (Old English).

“…O Muse! the causes and the crimes relate;

What goddess was provok’d, and whence her hate;

For what offense the Queen of Heav’n began

To persecute so brave, so just a man;

Expos’d to wants, and hurried into wars!

Or exercise their spite in human woe?…”

A narrative poem is like an epic poem in that it tells a story, but it’s not as long. Think Alfred Lord Tennyson’s The Charge of the Light Brigade or Henry Wadsworth Longfellow’s The Midnight Ride of Paul Revere.

While many notable examples have both meter and rhyme, narrative poems are not required to have either.

“Once upon a midnight dreary, while I pondered, weak and weary,

Over many a quaint and curious volume of forgotten lore —

While I nodded, nearly napping, suddenly there came a tapping,

As of some one gently rapping, rapping at my chamber door.

‘’Tis some visitor,’ I muttered, ‘tapping at my chamber door —

Only this and nothing more’…”

Pastoral poetry concerns the natural world and the poet’s (or humanity’s) relationship with it. You’ll find examples of this poetic genre dating from Ancient Greece (the poetry of Hesiod) and Ancient Rome (Virgil) to the present.

Brilliant examples of this form include Christopher Marlowe’s “The Passionate Shepherd to His Love” (1599) and Sir Walter Raleigh’s “The Nymph’s Reply to the Shepherd” (1600).

“How sacred and how innocent

How free from tumult, discontent,

That was the first and happiest life,

Till pride exchanged peace for strife,

Blank verse has a precise meter — usually iambic pentameter, like a sonnet. But, unlike a sonnet, blank verse does not rhyme. You’ll find blank verse in verse plays by Shakespeare, long poems like Milton’s Paradise Lost, and shorter romantic poems

Think of blank verse as a sort of middle ground between structured poems that rhyme and the no-rules approach of free verse.

Whether ’tis nobler in the mind to suffer

The slings and arrows of outrageous fortune,

Or to take arms against a sea of troubles

And by opposing end them…”

Free verse has no rules for meter, rhyme, or musical form. To help create meaning and flow, free verse poems use strategic line breaks and natural speech, among other poetic devices, to create a rhythm of their own.

The best in free verse is proof that taking away the rules for meter and rhyme doesn’t take away the magic.

Life for me ain’t been no crystal stair.

It’s had tacks in it,

And boards torn up,

And places with no carpet on the floor—

But all the time

I’se been a-climbin’ on,

And sometimes goin’ in the dark

Where there ain’t been no light.

So boy, don’t you turn back.

Don’t you set down on the steps

’Cause you finds it’s kinder hard.

And life for me ain’t been no crystal stair.

What types of poems speak to you?

Now that you’re better acquainted with these 15 types of poems, which ones do you feel closest to? If you feel inspired to jot down some lines or ideas, please don’t let us stop you.

You have a poet in you. It’s never too late to give them more room to grow.