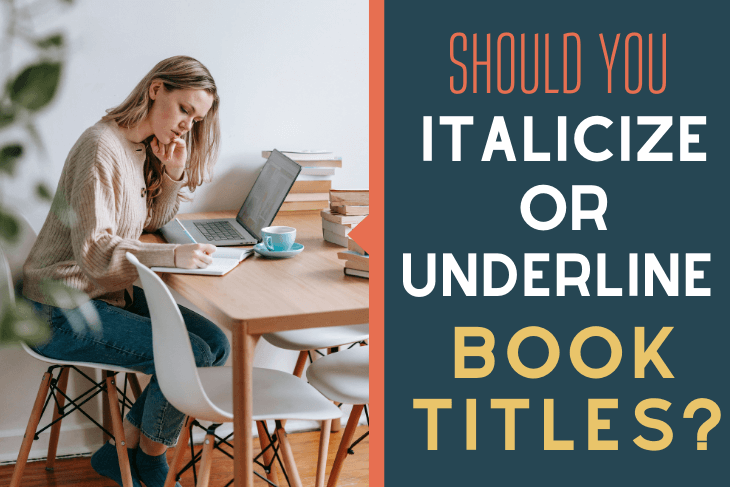 If your teachers taught you to underline book titles, it probably didn’t make sense to argue.

Plus, underlining is just easier when you’re writing things out by hand.

Not so with texting — or when you’re writing a book of your own.

When you reference your sources, do you underline or italicize book titles?

Are novels italicized or underlined?

And does it matter whether a novel or novelette is part of an anthology?

What are the rules worth remembering?

The Basics: Do You Underline or Italicize Book Titles?

If your main question is “Do I underline book titles or italicize them?” most style guides recommend the following guidelines:

That last one is the way to go when you include a book title in a text message or social media post or comment, where you can’t apply any kind of text formatting.

Underlining can be problematic with digital text (websites, digital apps, and ebooks) since we now associate it with hyperlinks, even if the font color matches the text around it.

Probably the most common scenario, when you can underline but not effectively italicize, is when you’re writing something by hand. While you could switch to cursive mid-sentence, underlining is less likely to be dismissed as a random quirk.

Plus, underlining is easier than cursive.

Some Exceptions To The Rule: Should You Underline or Italicize Book Titles?

Another exception is when you’re submitting text through a web form, which doesn’t allow text formatting (much like texting and social media posts).

A third exception involves chunks of italicized text that include a book title. In this case, you’ll want to keep the title unitalicized to make it stand out.

Keep these exceptions in mind when someone asks you, “Do you italicize book titles?” Because they do matter.

There’s one final exception, which we’ll revisit at the end of this post, and that has to do with the particular style guide you may be using.

So, what do you do if you’re italicizing a book title and you have to add punctuation — like an apostrophe to show possession — that isn’t part of the title? Do you treat that differently from the punctuation that the author included?

For the sake of clarity, we keep any added punctuation (apostrophes, dashes, ellipses, etc.) — anything not native to the original title — in regular, non-italicized text.

So, are all book titles italicized? And what about titles for smaller works like short stories, magazine articles, and blog posts?

To keep the rule as simple as possible, ask yourself whether the title in question is for a published container — like a blog, a website, a magazine or scholarly journal, or a complete book — or for something that would be contained.

Would you find this title on the cover of a finished whole (an album, the cover image for a podcast, etc.) or in a table of contents or a list of songs, poems, or podcast episodes?

Larger works get the italics treatment, as you’ll see in the following examples:

Smaller works that a larger work could contain get quotation marks. It’s not about which one is more important; it’s about making it easier for readers to tell them apart.

When you see a story title in quotation marks, you’re more likely to think, “Oh, that must be a short story?” Find a book of short stories and check out the table of contents, and you’ll find quotes around each story’s title.

Each is a smaller part of the whole collection, which bears an italicized title of its own.

Do You Italicize Titles of Novels and Books Included in Anthologies?

Each of the works included are abridged versions of completed books and novels.

If you’re looking up some options on Amazon, you’ll see quotation marks around the titles of the books and novels included in each hardcover edition.

It’s tempting to think the abridgment of the title is the reason for this. But collections like Reader’s Digest editions aren’t the only ones that do this—even when the titles in the collection are unabridged originals.

Read on for another well-known example.

How To Annotate A Book In 9 Key Steps

Do You Italicize Books Like The Lord of the Rings?

Books like LOTR bring together separate books that are all part of a complete series. In LOTR’s case, the complete set is a trilogy with the following titles:

If the book you’re referencing in your own writing is a separate title with its own cover, you’ll italicize the title in-text citations and in your bibliography.

But if you’re using the complete LOTR trilogy under one cover, you’ll set off any of the enclosed titles with quotation marks — as if they were separate parts of a larger book.

The same rule applies to other books that include all the titles in a specific series.

Do You Italicize the Titles of Sacred Books?

While we do italicize specific editions of sacred books (e.g., The New King James Bible), we do not generally italicize or underline the generic titles of sacred religious texts:

As for the specific books inside the Christian Bible, if you’re referencing a specific verse, you’ll include the name of the book (or an abbreviation), along with the chapter and verse, and text formatted the same as the text around it (e.g., Matt 3:5 or 2 Corinthians 4:16).

What Does the AP Stylebook Recommend?

That said, publications like Writers Digest use the AP Stylebook but choose to italicize their book titles in deference to their own house rules.

Whether you go that route will likely depend on what you or your client wants.

If you’re thoroughly confused right now, the main thing to remember is that in most cases, the rules described above will help you correctly format any book titles you reference in your own writing.

When in doubt, check your style guide.  And if you’re writing for someone else, ask them what they prefer or consult their chosen style guide.

Whatever rules you go with, be consistent.

Now that you know how to answer the question, “Do you underline book titles or italicize them?” which points stood out for you as most helpful? And what have you learned that you want to remember?