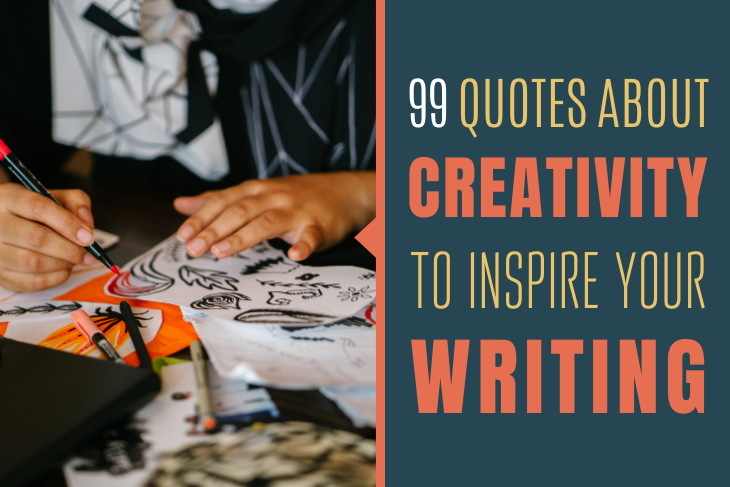 As a writer, you know the importance of creativity. It’s what keeps your brain alive and opens it to new possibilities.

It leads you into the world beyond your limited experience.

But it doesn’t get far without curiosity.

When you’re curious about something, you take action to learn more about it. You test limits and take risks.

That’s the point of these 99 creativity quotes for inspiration with your writing project. Find your favorites and see how much further your creativity can take you.

Enjoy these quotes from one of the most influential scientists of the 20th century, who valued imagination and curiosity over logical precision.

“True art is characterized by an irresistible urge in the creative artist.”

“The true sign of intelligence is not knowledge but imagination.”

“Everything should be made as simple as possible, but not simpler.”

“Small is the number of people who see with their eyes and think with their minds.”

“No problem can be solved from the same level of consciousness that created it.”

“It is the supreme art of the teacher to awaken joy in creative expression and knowledge.”

“The only way to escape the corruptible effect of praise is to go on working.”

“The monotony and solitude of a quiet life stimulates the creative mind.”

“Once we accept our limits, we go beyond them.”

“The world as we have created it is a process of our thinking. It cannot be changed without changing our thinking.”

“Nothing happens until something moves.”

“Only those who attempt the absurd can achieve the impossible.”

“A man should look for what is, and not for what he thinks should be.”

“Insanity: doing the same thing over and over again and expecting different results.”

“Creativity is seeing what everyone else has seen, and thinking what no one else has thought.”

“I have no special talent. I am only passionately curious.”

“Invention is not the product of logical thought, even though the final product is tied to a logical structure.”

“Once you stop learning, you start dying.”

“I believe in intuitions and inspirations. I sometimes feel that I am right. I do not know that I am.”

“Creativity is intelligence having fun.”

“Imagination is everything. It is the preview of life’s coming attractions.”

Who knows more about the power of creative imagination than Dr. Seuss? Generations of children unleashed their own imaginations with his whimsical stories and characters.

“You have brains in your head. You have feet in your shoes. You can steer yourself any direction you choose. You’re on your own. And you know what you know. And YOU are the one who’ll decide where to go…”

“Think left and think right and think low and think high. Oh, the thinks you can think up if only you try!”

“You can get help from teachers, but you are going to have to learn a lot by yourself, sitting alone in a room.”

“So the writer who breeds more words than he needs, is making a chore for the reader who reads.”

“Think and wonder, wonder and think.”

“If you never did you should. These things are fun, and fun is good.”

“It is better to know how to learn than to know.”

“I’m telling you this ‘cause you’re one of my friends. My alphabet starts where your alphabet ends!”

“You have to be odd to be number one”

“Nothing is going to change, unless someone does something soon”

“So, open your mouth, lad! For every voice counts!”

“Oh the things you can find, if you don’t stay behind!”

The visionary co-founder of Apple Computers had plenty to say about creativity and its role in both human evolution and happiness.

“Creativity is just connecting things. When you ask creative people how they did something, they feel a little guilty because they didn’t really do it, they just saw something.”

“Innovation distinguishes between a leader and a follower.”

“Remembering that you are going to die is the best way I know to avoid the trap of thinking you have something to lose. You are already naked. There is no reason not to follow your heart.”

“I think if you do something and it turns out pretty good, then you should go do something else wonderful, not dwell on it for too long. Just figure out what’s next.”

“None of us are as creative as all of us.”

“Sometimes when you innovate, you make mistakes. It is best to admit them quickly, and get on with improving your other innovations.”

“We do not say anything about future products. We work on them in secret, then we announce them.”

“That’s been one of my mantras – focus and simplicity. Simple can be harder than complex: You have to work hard to get your thinking clean to make it simple. But it’s worth it in the end because once you get there, you can move mountains.”

“You have to be burning with an idea, or a problem, or a wrong that you want to right. If you’re not passionate enough from the start, you’ll never stick it out.”

“The ones who are crazy enough to think they can change the world are the ones who do.”

Powerful quotes on creativity don’t have to be long; something short and sweet is easier to use as a mantra when you’re feeling tapped out.

“Great things are done by a series of small things brought together.” – Vincent van Gogh

“Have no fear of perfection, you’ll never reach it.”– Salvador Dali

“Creativity is a wild mind and a disciplined eye.”– Dorothy Parker

“It’s not what you look at that matters, it’s what you see.” – Henry David Thoreau

“If you want creative workers, give them enough time to play.”– John Cleese

“If you’re not doing some things that are crazy, then you’re doing the wrong things.”- Larry Page

“Create with the heart; build with the mind.”- Criss Jami

“Originality is the best form of rebellion.”- Mike Sasso

“If it doesn’t sell; it isn’t creative.”- David Ogilvy

“When we build, let us think that we build forever.”- John Ruskin

“The cure for boredom is curiosity. There is no cure for curiosity.” — Dorothy Parker

“Somewhere, something incredible is waiting to be known.”– Carl Sagan

“Art is not a handicraft, it is the transmission of feeling the artist has experienced.”- Leo Tolstoy

“Absurdity and anti-absurdity are the two poles of creative energy.”– Karl Lagerfeld

“Perfection is no small thing, but it is made up of small things.”– Michelangelo

“The creative adult is the child who survived.” — Ursula Leguin

“The desire to create is one of the deepest yearnings of the human soul.” — Dieter F. Uchtdorf

“Everything you can imagine is real.” — Pablo Picasso

“The chief enemy of creativity is “good” sense.” — Pablo Picasso

“Doors are for people with no imagination.”― Derek Landy

“I dwell in possibility.” – Emily Dickinson

“The urge to destroy is also a creative urge.”― Mikhail Bakunin

“You don’t base records on success; you base it on creativity.”– Nikki Sixx

Some of the following creativity quotes will probably sound familiar, but that doesn’t make them less inspiring.

“Imagination is the beginning of creation. You imagine what you desire, you will what you imagine, and at last, you create what you will.” – George Bernard Shaw

“Creativity is more than just being different. Anybody can plan weird; that’s easy. What’s hard is to be as simple as Bach. Making the simple, awesomely simple, that’s creativity.” – Charles Mingus

“When you can do a common thing in an uncommon way; you will command the attention of the world.”- George Washington Carver

“The important thing for you is to be alert, to question, to find out, so that your own initiative may be awakened.”- Bruce Lee

“The principal mark of genius is not perfection but originality, the opening of new frontiers.”– Arthur Koestler

“To practice any art, no matter how well or badly, is a way to make your soul grow. So do it.” — Kurt Vonnegut

“Creativity involves breaking out of expected patterns in order to look at things in a different way.” — Edward de Bono

“Creativity is the key to success in the future, and primary education is where teachers can bring creativity in children at that level.”–  A. P. J. Abdul Kalam

“The painter has the Universe in his mind and hands.”― Leonardo da Vinci

“Vulnerability is the birthplace of innovation, creativity and change.”― Brene Brown

“Use anything you can think of to understand and be understood, and you’ll discover the creativity that connects you with others.” — Martha Beck

“If you’re not prepared to be wrong, you’ll never come up with anything original.” ― Ken Robinson

“Start where you are. Use what you have. Do what you can.” — Arthur Ashe

“Develop a passion for learning. If you do, you will never cease to grow.” — Anthony J. D’Angelo

“If you cannot do great things, do small things in a great way.” – Napoleon Hill

“There is no such thing as a new idea. We simply take a lot of old ideas and put them into a sort of mental kaleidoscope.” – Mark Twain

What is your favorite quote about creativity to inspire your writing?

I hope you enjoyed these inspiring creativity quotes and found some new favorites to keep close at hand. Now that you have the words of famous creatives circulating in your head, what do you feel inspired to do today?

Maybe you’ll start a new creative project. Or you’ll pick up a long-neglected one.

What can I do to help? My goal here is to help you become a well-paid writer, and I see providing a high-quality supply of inspiration as part of that.

Plus, it doesn’t hurt that quotes like these inspire me to do more, too. They get me thinking about all kinds of fun and (I hope) useful article ideas.

May they lead you to something that lights you up inside.