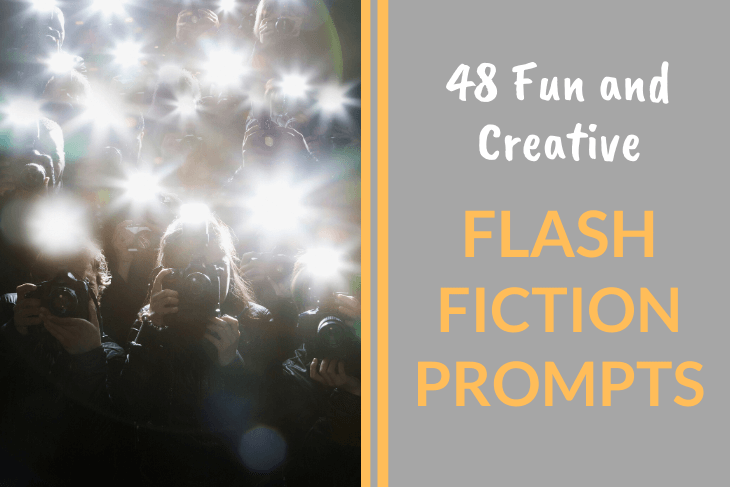 You keep running into microfiction stories in your social media feeds. Some of them are really good, too.

And you’re thinking, “I bet I could write something like that.”

All you need are some inspiring flash fiction prompts to get you started.

Even if you just want to challenge yourself to write more and to share more of what you write, flash fiction is an excellent way to hone your storytelling skills.

And if you win some flash fiction writing challenges along the way, so much the better.

To get you started on your first (or next) short story, we give you the following 48 flash fiction writing prompts.

Keep in mind that your first draft doesn’t have to fit within your target flash fiction word count. That’s what editing is for.

For now, enjoy this list of flash fiction prompts, and get some writing in today when you can.

Who knows which flash fiction ideas will become the seeds for your best stories this year?

1. A new mother gently lays her sleeping infant in the bassinet seconds before the phone rings. She closes her eyes, knowing exactly who it is — and who it isn’t.

3. When I woke up, he was gone. All that remained of him were the socks he lent me (still on my feet) and a note he left on my fridge: “You know why I need to do this.”

4. “Well, what I find very interesting is…” he began, and she sank into her chair, exhaling quietly and turning her attention to the empty fields outside.

5. “I’ve noticed you don’t hang out with girls your age,” he said. “I think it’s because you’re less… developed than they are.” I looked at him and felt nothing, at first.

6. My arm slipped on the wet tile, and I went under. When my hand found the rope, I pulled myself up and out of the pool, gasping for air. None of them had noticed.

7. She stood shivering knee-deep in the surf and laughed. “Come and get me,” she called out. The waves heard and came galloping to meet her.

9. “I nailed the last window shut,” she said. “Those cats are smart. Strong little buggers, too. But they’re not getting out, now!” I smiled and closed my door.

10. People make assumptions about women with short hair, comfortable clothing, and practical shoes. I knew that. I’ve even used it to my benefit. But the words stung.

11. He was responsible for all those kids, and their parents won’t let him forget. He stops at the memorial display to set a teddy bear in front of one of the pictures.

13. Eating disorders are virtually unknown in this age, since everyone receives daily rations based on their nutritional needs. So, why the box of chocolates?

14. I woke up to the glare of a flashlight shining in my face and a hand clamped over my mouth. “Not a word. They’re close, now. And you’re just their type.”

15. I finally had my very own AI housekeeper. She learned quickly, anticipating every need. What I never expected was the look she gave me when I thanked her.

16. He’d found the ring during one of his digs and had never turned it over to his boss. “It’s perfect for you,” he said. So perfect that I could no longer remove it.

17. Though obviously in her 20’s, she was dressed in the same clothes I’d seen earlier on Mrs. Alder. She smiled at me nervously before reaching into her purse.

18. No one told me that the changes I would undergo would be this obvious. Had I known what to expect, I wouldn’t be on stage right now.

19. She knew how attached I was to this planet. That’s what this was about. And all because I refused to donate my child — my half-human child — to her service.

20. That was the deal. I do the job, and my BFF spends the rest of her life trapped in an alternate universe, while I step back into the life she stole from me.

21. This was the day to prepare her for the changes she would undergo. She’s trusted me for sixteen years. If I lose her now, we’re all dead.

22. “How could I possibly have been on the other side of the planet an hour ago?” I asked. She tilted her head and smirked. “I didn’t mean all of you.”

24. Just one capsule, and my mind and body would be upgraded to Human 2.0. I’d be brilliant and hot. The only drawback? My best friend doesn’t want me to take it.

25. They found her with a full bottle of Jameson and a carefully-wrapped pickle from the deli. “Poor lass,” he said, scowling at the bottle. “Cause of death?”

26. It was too good an opportunity to pass up: $1,000 just to deliver a letter to an old recluse who’d lost his daughter. How was I supposed to know I looked like her?

27. Other pregnant women craved pickles, fries, and Mexican food. Me? I craved my next door neighbor. He looked me up and down and smiled back, inviting me in.

28. After planning to murder her fiancé and almost murdering me, I didn’t expect her to call and tell me I was the one person she could trust.

29. He was the only customer who tipped me that day. The tip had his phone number. Now the phone rang in his pocket as he lay in the dumpster behind my shop.

30. She’d made a habit of challenging him. And for a while, we all thought he liked it, if only deep down. But as he sat across the table from me, I saw the familiar tic.

31. They found him badly bruised and wearing one of those strap-on pregnant bellies, stuffed with rocks. She’d kept her promise to him.

32. He’d died giving her time to run. Today, at the gym, she showed me the ring. When I asked if she knew the masked killer, she looked across the room — to her trainer.

33. He bought me a coffee and a scone, and we talked about his missing sister. They’d argued about her fiancé the day her dog had shown up without her.

34. Henry VIII catches his reflection in the mirror and sees another face looking back at him, wearing strange clothes but exuding the same dismissive arrogance.

35. A corrupt and predatory bishop is elected to the papacy. One child, named Petra, loudly prophesies: “With this rock, I will shatter what you’ve built in My Name.”

36. One by one, the women rushed to put out the fire out before it reached the girl’s feet. “Who are they?” one asked her, pointing a blade at the minister. “Name them.”

37. “I do not allow a woman to speak,” he said, quoting St. Paul. “And since when does any woman need your permission to speak?” she asked aloud, rising to her feet

38. King Tut’s tomb was on display for the first time. But as I looked, I saw that something was missing. The fools had taken it, after I’d warned them not to.

39. She held up their second child for the prince to see. “Not another girl,” he said. “And this one even has red hair.” Her face said everything, and she held her baby closer.

40. “We narrowly missed it,” the captain said, “and we owe our lives to this man.” He stood on the Titanic’s deck, his dark skin glistening, and gave a silent nod.

41. She stumbled into his arms, clutching the diary as though it contained the last bread on earth. “You’re safe, now, Anne,” he told her. “Let’s go home.”

42. “Thank God, Charles! They’ve found our baby alive,” she said, embracing and kissing the child as he clung to her, wrapped in a familiar coat.

43. A couple sits at a table in the restaurant where they first met. One of them is acting nervous, fidgeting with a letter.

45. “You know whatever you choose, I’ll be there, right?” he whispered. I exhaled, closing my eyes, and leaned into him. I knew. “I’ll have the Reuben. And a beer.”

46. The date started out well. He showed up with a rose and cartons of Indian takeout. After we ate, he withdrew a stone from his pocket, and asked, “You trust me?”

48. “Did you take notes today in class?” he asked, catching up with me. The dark circles stood out against his ashen face. “I did.” “Trade you a peek for some coffee?”

5 Of The Best Writing Prompts Books

How will you use these fast fiction prompts?

I hope at least one of these 48 flash fiction prompts gets your creative mind working.

There’s no telling where you’ll take it. Once you’ve written and polished your first piece of flash fiction, share it and get started on another.

We’ll be here, cheering you on and cranking out more material to help you write and share more than ever. Let this be your most prolific year yet!

Maybe flash fiction will be your first brave step into the world of self-publishing. Or maybe it’ll be your next.

What works will you remember most from this first year of a new decade?

Whatever your process looks like, may you encourage others as you find your own way. And may your example inspire others to do the same.

How Many Words Are In A Novel (By Genre)?