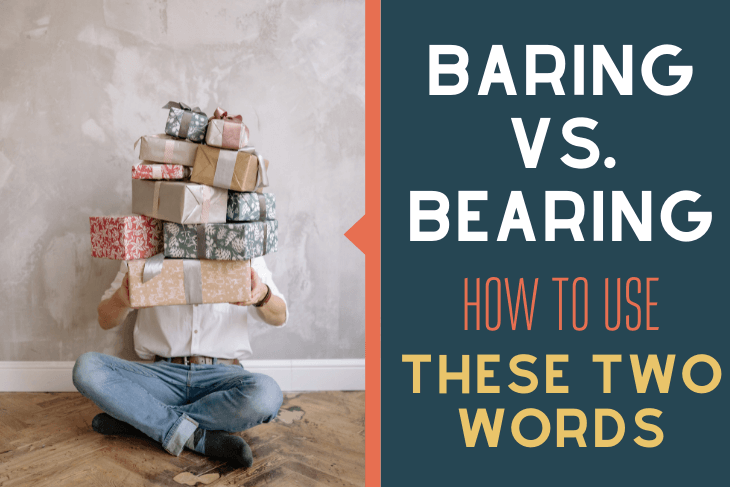 Like other homophone pairs, baring and bearing sound the same but have different meanings.

And like many homophones, they’re often confused with each other.

Fortunately, we have a few tricks to share to help you tell them apart.

To know whether bearing or baring is the right word for a specific context, you need to understand clearly what each word means.

Baring vs. Bearing: What Is the Difference

The dictionary seems like a good place to start for definitions. That said, the entries for both words (especially bearing) are pretty long.

Bearing — as a noun:

Bearing — as the present participle of to bear (v):

The other word, “baring,” has fewer uses, both of which are very different from the possible meanings for “bearing.”

Baring — as the present participle of to bare (v):

Now that you know the difference, it’s easier to see whether bearing gifts or baring gifts is the right expression to use.

Before we move on, let’s throw in another word just to make this more fun: barring, which is similar to baring but with an extra r. It doesn’t sound like either bearing or baring, but it looks similar enough to one of them to cause confusion.

Let’s define this one, too.

Picture a bar — or barrier — in the way of doing something you or someone else wants to do.

Baring or Bearing or Barring? 7 Examples of How to Use These Words

Read through the following examples to see when to use baring vs. bearing or baring vs. barring. It gets easier with practice.

Bearing children means not only carrying them to term but giving birth to them.

Barring children implies blocking, excepting, or preventing them from doing something, and the context should provide clues to support this.

With the words “bearing gifts,” it’s not hard to picture someone carrying neatly-wrapped presents in their arms. The expression, “I come bearing gifts,” implies you’ve arrived in possession of something you know the other person wants.

But if you’re baring your gifts (i.e., exposing them), the mental image is very different. Because depending on the gifts you have in mind, baring implies you’re revealing them, uncovering them, or exposing them to others. And that can have consequences.

If you “bare it all,” whatever you reveal is “laid bare.”

On the other hand, if you “bear it all,” you’re enduring or carrying the weight of it all, which can eventually become unbearable.

Barring it all doesn’t make sense unless you’re preventing “it all” from doing something or blocking its admission to something.

Even then, “barring it all” looks like a typo and sounds worse.

You can bare your soul by laying your thoughts bare before others. You’re essentially exposing your soul to someone else’s scrutiny, which involves the risk of rejection or criticism (or both).

Bearing your soul has a different meaning. Try any of the definitions offered above, and none of them really make sense. You don’t really carry your soul — or endure it — or give birth to it.

Barring your soul doesn’t make sense, either. You’re not excepting it or preventing it from doing something.

You’ll often see this expression in relation to a woman in labor, focusing her energy on pushing her baby out the birth canal.

Another use for “bearing down” relates to pursuit. If one horse is bearing down on another in a race, it’s catching up and about to overtake them.

111 Negative Adjectives To Describe A Person

9 Of The Most Useful Thesauruses For Writers

Barring your teeth doesn’t make sense, either, unless you’re preventing your teeth (or someone else’s) from doing something. For example, “He muzzled the dog, barring its teeth from doing any harm.”

Baring and barring are two very different words, as you’ve already seen from their definitions. The only similarity is the closeness of their spelling, the only difference being the extra r in barring.

The tricky thing here is that tools like spell check and Grammarly might miss a mistaken use of baring or barring because both are real words.

Even the best editing tools can miss context clues, which is why it still makes sense to read your work carefully before shipping it.

Now that you’re familiar with bearing vs. baring vs. barring, what tips have you found most helpful? And what are you most likely to remember a year from now?