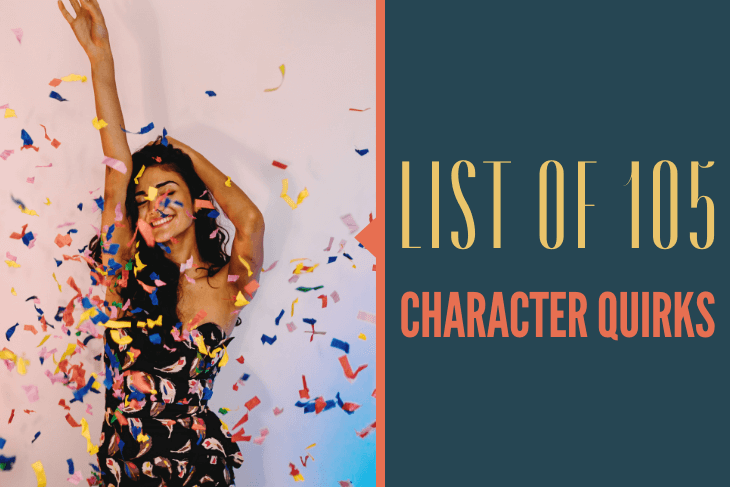 Describing a person as “quirky” is often a compliment, but not always.

If you have any quirks that make you stand out in some way, you know what I mean.

They can also make them easier to dislike.

But what makes quirks so powerful?

And how can you harness this power for good?

What Are Personality Quirks?

A character’s quirks make them stand out in some way from the crowd. Those quirks can be physical (e.g., spiky blue hair or brightly-colored scarves) or tied to their personality or their strengths and weaknesses.

One character’s signature quirk could save their lives or the lives of their friends. Another’s quirk could bring about the apocalypse.

Think of other characters in your favorite movies, novels, or TV series and how their quirks contributed in a memorable way to their success or failure.

How to Use Character Quirks in Your Writing

It’s not as simple as mentioning the quirk in passing or have one of your characters remark on it out of the blue.

Consider the following ways to make your character quirks meaningful and memorable:

You want your character’s quirks to add to the story and make them more relatable or compelling to your readers. But they shouldn’t eclipse the more essential elements of your story.

Enjoy this list of quirks, grouped by category. and try out a few with your characters. See what a particular quirk might add to your story or change how it develops.

The better you know your characters, the easier it is to see which quirk or quirks make the most sense.

3. Heterochromia (each eye has a different color)

7. Wheelchair or other assistive tech for mobility

8. A distinctive mole, birthmark, or scar

9. A habit of nailbiting

15. Talks so softly others can barely hear them

18. Never seen without a faceful of make-up

19. Stutters or has difficulty speaking

20. Smokes and has a raspy voice

22. Snores (possibly due to a deviated septum or sleep apnea)

23. Extremely muscular or extremely the opposite

26. Always wears a distinctive piece of jewelry or article of clothing

27. Is constantly writing their observations in a small notebook

28. Honest to the point of showing zero consideration of people’s feelings

29. Messy and unable to find things when they need them

31. Quick to judge/criticize others, particularly those who disagree with or defy them

32. Short-tempered and quick to take their anger out on others

33. Needing to win at everything — and taking it badly when they don’t

34. Always patient and calm, to an abnormal degree

35. Always seeing the good in others, even when it costs them

36. Obsessive personality who is the “ultimate fan” of their chosen obsession

37. Always looking for an excuse to drink (alcohol) and party

38. Always energetic and ready for anything

39. Constantly getting lost, thanks to their terrible sense of direction

41. Wildcard whose behavior no one (not even friends or family) can predict

42. Rarely shows emotion and doesn’t know how to be around those who do

46. Never dating and looking for someone who meets their impossibly high standards

47. Crushing on a new person every week or so and imagining a lifetime together before moving on to someone else

48. Talented musician with a particular instrument (or with more than one)

52. Can pick any lock, using what they have on hand

54. Speaks multiple languages fluently — even some obscure ones

56. Knows everything about random topics or trivia

57. Exceptional photographic or phonographic memory, which is a mixed blessing

59. Clairvoyance, clairaudience, or the gift of prophecy

60. Strong intuition that guides them and those who listen to them

61. Model athlete who excels at a particular sport or athletic activity

63. Restless when all is well and at their best in a crisis situation

65. Unable to lie, even to save their life

66. Tending to see the worst in people or to focus on their faults

67. Lazy, unwilling to work, and expects others to support and coddle them

68. Tending to blame others for their own problems

69. Terrible at driving and constantly endangering others

70. Painfully awkward when it comes to public speaking or acting

72. Predatory toward those they perceive as weaker

73. Manipulates others (even friends and family) to get what they want

74. Gets insanely jealous over nothing

75. Always late or always ridiculously early and judging those who come any later

76. Terrible at penmanship, with illegible handwriting and ridiculous signature

77. Always gets blackout drunk and ends up in strange places

79. Deeply in debt and always needing (or wanting) money

81. Dresses in the same color every day — or all in one color that varies day by day

82. Won’t drink plain water (must have bubbles or food coloring).

83. Always overdresses for the occasion

86. Prefers the outdoors — for sleeping, working, and using the bathroom

87. Plans their outfits or meals at least a week in advance.

88. Sings opera (badly) in the shower

89. Plays a musical instrument at work because it helps them think

90. Brings a favorite stuffed buddy or doll everywhere they go

91. Wears the same friendship bracelet given by someone they don’t talk about

92. Carries a lint-roller and offers to de-lint the clothes of random people

94. Can be depended on to drop things they’re asked to hold (especially if it’s fragile)

95. Always crafts unusual and innovative gifts for friends and family

96. Has an imaginary friend and talks to them out loud

100. Pretends to gallop on a horse when they’re in a hurry

103. Clumsiness to a degree that reaching adulthood is statistically unlikely

105. Thinking they’re ugly when every other character sees them as beautiful

Which quirks fit your characters?

Now that you’ve looked through this list of 105 character quirks, which quirky traits would make your protagonist more interesting or endearing to your readers?

Which could make your antagonist easier to dislike — or (plot twist) easier to root for?

Whatever quirks you choose for your characters, make sure they add to your story, so they don’t feel tacked on with little thought or thrown in last minute.

Your characters, and your readers, deserve better.