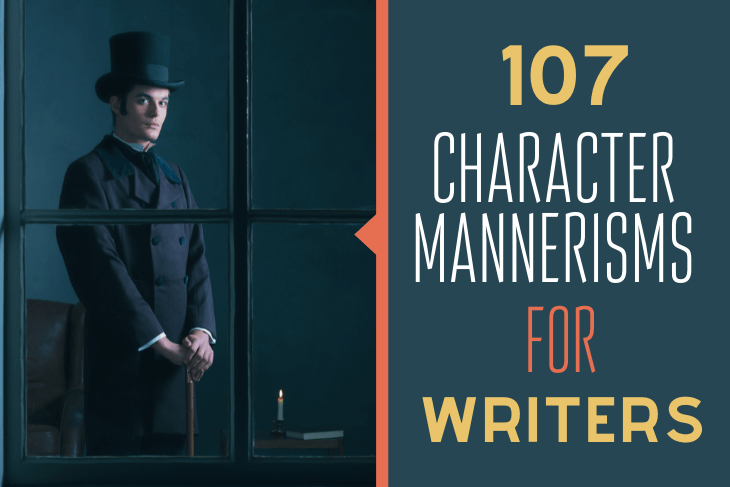 The best characters show rather than tell the kinds of people they are.

That’s where character mannerisms come in; they connect storytelling imagery and actions to each character, often without the need for extra dialogue.

Each character’s mannerisms can be a mix of expected and surprising elements.

The purpose of the list below is to get you thinking of ways to make your characters more real and more interesting to your readers.

Read carefully through the following list of mannerisms to find the ones best suited to each of your story characters.

Make a note of the ones you can most clearly picture.

Characters Who Are In Love

2. Smiling all the time

3. Whispering into their beloved’s ear

4. Fluttering their eyelids and blushing a lot

5. Constantly checking their phone and obsessing over every text

6. Losing their appetite and ability to sleep

7. Twirling/playing with their hair absent-mindedly while talking to their beloved

9. Oblivious to everyone except their beloved

10. Stuttering or faltering a bit in response to their love interest

Characters Who Are Lying or Hiding Something

13. Looking to the left often

16. Changing their tone of voice in odd ways

17. Pausing while speaking (to invent details or gauge the listener’s response)

Characters Who Are Anxious, Angry, or Scared

23. Compulsively scratching their nose or the nape of their neck

26. Clasping hands behind the back

27. Pacing back and forth

34. Standing with feet apart and looking straight ahead

35. Interrupting others when passionate about a specific topic

38. Clasping hands behind the head

39. Remaining sober at parties (no need for “liquid courage”)

40. Standing out from a crowd

Characters Who Are Sky or Lacking in Confidence

42. Looking down when walking

43. Wearing hats or hoodies with the hood often up

45. Apologizing often and for everything

46. Wearing headphones a lot to avoid interacting with others

48. Hugging arms around themselves

50. Keeping their hands in their pockets while sitting or walking

51. Preferring to stand rather than to sit next to strangers

55. Fidgeting with hair, clothing, or jewelry

57. Tapping their fingernails on a surface

58. Staring off into the distance

59. Clasping together and unclasping their fingers

62. Resting their head in their hands

Characters Who Are Funny or Who Enjoy Humor

64. Telling jokes to whoever will listen

66. Laughing a lot / finding humor in much of what they experience

69. Constantly checking themselves out in reflective surfaces

70. Loudly pointing out faults in others

71. Uses dismissive body language toward others

73. Wears only the best and trendiest brands and styles of clothing, shoes, etc.

75. Leaves their messes for others to clean up

76. Wears their hair in a tight bun or immaculately slicked back

78. Pinches their lips together

79. Has perfected the stern glare of disapproval (and uses it often)

80. Crosses legs while sitting with a stiff or prim posture

81. Smiles only rarely and with reserve—and often at least a sliver of contempt

82. Stands with hands on their hips (power pose)

83. Looks down their nose at anyone who manifests human frailty

Can Words Be Sexy? Take A Look At These 55 Suggestive Attention-Grabbers

87 Writing Prompts About Yourself

86. Takes glasses off and cleans them

89. Imitates the clothing choices and mannerisms of scholars they admire

90. Often expounding on the state of the world today

91. Tilts head to the side when listening

92. Moves quickly from one task to the next

93. Steeples their hands when in thought

95. Making multiple to-do lists and checking off items one by one

98. Often looking disheveled or as if they skipped personal hygiene

100. Scrambles around frantically for lost or misplaced objects

101. Often distracted and losing focus on their given task

102. Eats noisily and with their mouth at least partly open

104. Clenching their fist when things don’t go according to plan

105. Exhaling sharply or breathing loudly enough for others to hear

106. Putting fingers to forehead or bridge of the nose while shaking their head

First of all, let’s tackle some of the biggest questions that arise whenever writers and readers discuss character mannerisms.

What are examples of mannerisms?

As you see from the 107 examples of mannerisms listed above, we’re talking about visible manifestations of character traits and emotions.

Listing all of them would be impossible, so we’re counting on your fertile imagination and memory to take our list and add to it with ideas of your own.

Use what you know to build upon what you read here.

What are common mannerisms?

Common mannerisms are the ones that come to mind most quickly when you hear a brief description of a character’s defining traits or what they’re feeling in a particular moment.

How do you describe character mannerisms?

If you can imagine your character acting in a certain way, try describing their behavior in clear, simple, and elegant language. Don’t expect your wording to be perfect right from the start. Write anything that comes to mind.

Then refine it to make it clearer and distill it to its essence.

Now that we’ve armed you with this list of 107 examples of character mannerisms, which are you most likely to use with the characters in your current work in progress?

And which mannerisms do you see in yourself and the people closest to you?