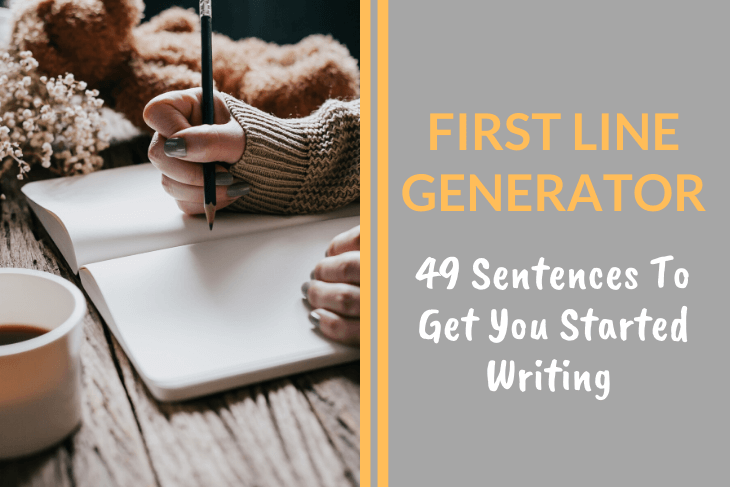 First Line Generator: 49 Sentences To Get You Started Writing

And sometimes all you need is a single sentence to get you started on your next epic story.

Among the one sentence prompts you’ll find below, you’re sure to find at least one first line generator for a story you’ll love writing.

So, whether you’ve got a first name already picked out for your next main character or you’re starting with nothing but the will to write, enjoy the prompts below.

The best way to use a sentence generator is to start free-writing on the first one that grabs your interest and write as quickly as you can.

This is not the time to edit. Let the words flow out as the story forms in your mind.

1. With his background and fierce appearance, no one expected Bruno the mastiff to be a good dog for small children.

2. She frowned thoughtfully at the tarot cards arranged before her.

3. Writing down her thoughts about their relationship wasn’t as cathartic as she’d hoped.

4. She bent down to pick up what she thought was a half-buried seashell.

5. No one suspected that every one of the vaccine syringes sent to those areas would render their receivers sterile for life.

6. It was there the billionaires of the world gathered to announce their joint decision, either oblivious or indifferent to the revolution brewing next door.

7. Just when she thought she’d finished crying, the phone rang.

8. On a night like this, the sky should be full of stars, but as she looked up, her legs almost gave out.

9. She’d forgiven everyone and emptied her home of all that gave it meaning.

10. Three times, now, she’d almost died, and no one had noticed.

11. Her fifteen-month-old son tensed up in his shopping cart seat when the man approached.

13. Her voice broke over the phone when mine did, but she said, “It’s actually pretty nice here.”

When you’re writing your next page-turning fantasy novel, a good first line can get the creative ideas flowing.

Use these as a springboard, even if you end up changing the first line in your final draft.

14. This world was never meant to survive her.

15. As far as she was concerned, he was a typical teenager with a hoodie.

16. It’s not every girl who finds out her mom is a centuries-old superhero.

17. My first tutor was a dragon with a terrible sense of humor.

18. I looked into the crystal ball and saw myself walking hand-in-hand with my mortal enemy.

19. What I made for my mother’s birthday was supposed to be a harmless pendant.

20. I spent a thousand years in that bottle before a child freed me from it and called me “Mama.”

21. He made it sound as though the very worst thing I could be was a witch.

22. She was changed into something else while her parents stood nearby, watching the others.

23. The label on the bottle said “Drink me,” and Alice rolled her eyes and snickered as she poured herself a glass.

24. The freeway was completely deserted, and the only words on the marquee near my exit were “Supplies have run out, and shelters are full.”

25. She told me I was the perfect candidate for their weaponized shifter program; and their target was someone easy to dislike.

Don’t underestimate the creative power of random thoughts from memories or recent experiences.

Use one of the following to launch into a story that weaves elements of your own or someone else’s history into it.

27. One bite, and his eyes closed, his focus turned inward, while she quietly exhaled.

28. She was the kind of person who loudly insulted others’ intelligence while neglecting her own.

29. Doctors told her she could never diet again.

30. I don’t sleep with that stone unless I want to wake up feeling as though I spent the whole night running.

31. It was enough for her that he’d found a lost child and returned him to his parents.

32. You’d think a winning lottery ticket was just what we needed.

33. In exchange for the apartment, she had agreed to bring the inmate his meals.

34. Her father always said driving would be the death of her.

35. What if I told you the separation of church and state is an illusion?

36. The largest golden maple leaf I’d ever seen landed at my feet as I turned the corner.

Sometimes, all you want to write is a poem to express the ideas circulating in your mind.

Use any of the following to open the spigot and let the uncensored words out onto the page. Editing can wait.

39. The trees would miss you if you left.

40. The sunlight brought me back to you.

41. I was tired before my first sip of wine.

42. Memory is all around us, as well as within.

44. No expensive funeral for me, if I even have one.

45. The first step toward you was the hardest.

46. My hope literally took form inside of me.

48. I come to shatter this fortress— not protect it.

49. You were born to make mistakes and to change the world as you learned from them.

How to Start Writing By Creating the Daily Writing Habit

12 Of The Best Writing Websites To Inspire You To Write

If you had to choose one first line generator from the selection in this post, which ones spoke to you the loudest?

Or have you already started writing something that has you brimming with creative energy and excitement?

If this will be a long story, remember to do yourself a favor and stop for the day when you still want to keep going.

When you already have an idea of what happens next, sitting back down to it is much easier.

May the words keep flowing. And may at least one of these writing prompts set you on the path to writing something you and your readers will love.

How Many Words Are In A Novel (By Genre)?