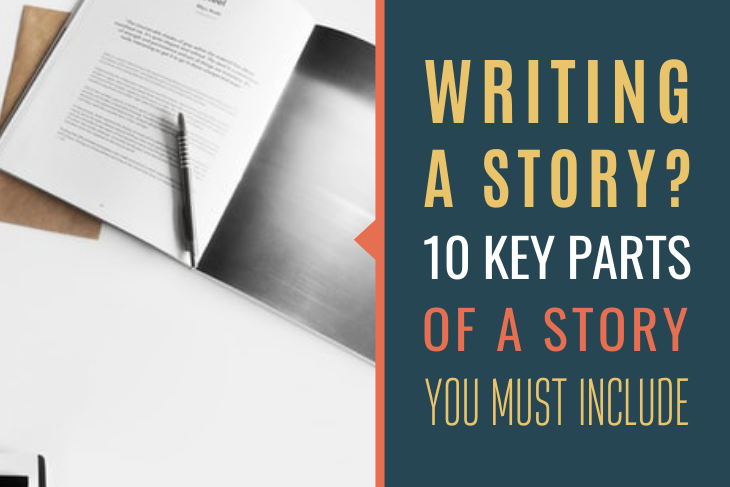 Do you know the essential parts of a story — or why they’re essential?

Think back to the last story you read (or listened to) that captured your imagination and held onto it to the end.

Chances are the story elements described in this article were responsible for that.

And you can probably point to at least one of them and remember how that element in the story took hold of you.

But what are the elements of a compelling story?

And how do you put them together to create one of your own?

What are the elements of a story?

To break down a story into its elements for the purpose of analyzing it, it helps to start by breaking the plot down into five stages:

As you add information from the story to flesh out this basic outline, you’ll gain a better understanding of the details that are not only memorable but necessary to the story.

If that sounds like too haphazard an approach, consider the questions a journalist would ask when writing a story:

From there, we can make a list of our essential elements, starting with the five that every story should have.

The remaining five make a story come to life and help it find a permanent place in our collective memory — connected to others that aren’t so different but sound different enough and feel familiar enough to make us want more.

10 Essential Parts of a Story

Here follows the list of story elements no narrative should go without.

Once you understand the elements and why every story needs them, you’ll be able to read any short story or novel, identify its parts, and understand why its treatment of those parts has left you with the impression you have.

And if the story is a dud, you’ll also likely think of ways to make it better.

5 Parts of a Story that are Foundational

Your characters are the people who make the story happen — or to whom the story happens. Depending on the length of your story, those can include the following but must have at least the first of them.

It’s important to note, too, that none of the characters have to be human (or even human-shaped). Your favorite character might be a dog, a centaur, a sentient tree, or something completely different.

The main thing you want your main character to have is a clear goal. Your most important characters should want something. And something or someone should stand in the way.

The setting of a story deals with the where and when — the places your characters go, the era in which the story happens, the time of the year, the times of a day, and so on.

It also includes details like the weather, the language spoken, cultural norms, the political climate, and other things that can influence your other story elements.

Setting can change from scene to scene, and the setting itself can even serve as a character. It can also provide symbolism and hint at the story’s overall message.

How the narrator describes the setting can also offer clues about the perspectives involved.

An effective setting is neither more nor less than everything your story needs it to be.

In 1863, German playwright and novelist Gustave Freytag wrote Die Technik des Dramas in defense of the 5-act dramatic structure. His study gave us what we call Freytag’s Pyramid, which breaks down the plot of a story into five key elements:

The exposition is basically the story’s introduction, where we meet the main character, get a feel for the setting and other essential details, and learn what’s at stake.

Then plenty more happens during the rising action that leads the reader to that moment of truth — or “the point of no return” or whatever pithy phrase comes to mind when someone asks you, “What is climax?”

It’s the thing we hope our readers recognize. No one wants to hear, “Are we there yet?” when what was supposed to be the climax has already happened.

And on the downturn, during the falling action, we want to see loose threads gathered and neatly tied up. We want to see the consequences of whatever happened at the climax.

We also want to see story plots with a satisfying resolution. And when that resolution comes at the end of the story, it could be a catastrophe. Or it could be what the reader hoped would happen.

Or it could be neither.

Conflict in a story is so important to its success, it deserves its own place on the list of foundational elements.

Without conflict, you might as well write about your favorite character eating nachos and watching paint dry. Even idle people-watching might generate a conflict.

In fact, pretty much any time you put two people in a room together, no matter how alike they are, you can probably find (or create) some conflict between them worth writing about.

And once you introduce conflict, the story starts to get interesting. Suddenly, someone wants something, and someone or something else is blocking their access to it.

Or someone has a strong opinion about something, and someone who usually agrees with them speaks up with unaccustomed outrage. And the story (or your reader) has officially woken up. The contest has begun.

And if the stakes are high enough and important enough, the reader will want to know how it ends.

Story plots with a weak resolution or those that leave the reader hanging deserve the contempt heaped upon them.

Same goes for movies and popular TV dramas with endings that leave devoted fans shocked, disappointed, and clamoring for a redo.

As readers — and as writers — we want a satisfying resolution to a story that has drawn us in and cost us hours of sleepless attention (and possibly a few meals).

The resolution answers the questions lingering in the reader’s mind:

Some endings leave a thread or two unresolved or open to the reader’s interpretation. This can work as long as the resolution answers the reader’s most pressing questions in a satisfying way.

The theme of a story tells you something about why it was told and how the story relates to the bigger picture of existence. It explores questions and ideas that have been with us for millennia, if not from the beginning.

How many of the following themes have you encountered in the books you’ve read this year?

The theme provides a framework for the story and ties it to universal human experience, making it more relatable and memorable.

The moral or overall message of the story is the takeaway. It answers the question, “What does the story tell the reader about life, the universe, morality, God, etc.?”

You don’t have to write a fable or parable to write a story with a moral. And the message your story sends will depend on the voice of the one telling the story and on their perspective.

The moral can either reinforce what the culture accepts as traditional morality or it can challenge it. The more memorable ones tend to do the latter.

For a counter-cultural message to stick, though, it has to take hold of the mind as well as the heart. It has to respect both justice and mercy.

It has to be bigger than the smaller universe it shakes up.

A synchronicity is, by definition, a meaningful coincidence. But that begs the question, “Is there such a thing as a meaningless coincidence?”

When it comes to writing stories, there shouldn’t be. Everything in the story — every use of symbolism, every coincidence, every bit of dialogue, every significant detail — has meaning.

If it doesn’t have to be there, it shouldn’t be.

Symbolism and synchronicities aren’t there as a garnish. They add meaning and draw the reader’s attention to something important. They might gently hint at something readers are only dimly aware of at that point.

And later on, the reader will remember that meaningful detail and think “Aha! I knew that was important.”

The story’s point of view (POV) has plenty to do with how invested you become in the main character’s storyline — or in those of supporting characters.

First-person point of view usually draws the reader right into the main character’s head. You get to see and process everything from that character’s perspective.

Unfortunately, that also means, you see all the other characters from that one (possibly myopic) point of view.

With third-person limited, you see all the characters from the point of view of an impartial narrator, but you don’t get to see inside anyone’s head or heart. There’s more distance between the reader and character, but at least there’s no head-hopping.

The limited third person narrator only knows what they can see from the outside; so that’s all the reader can see, too. But the outside can reveal plenty.

Finally, with third-person omniscient, you see all the characters from the point of view of an all-knowing narrator who can pop into any character’s head and know their thoughts and feelings.

Oddly enough, this can create even more distance between you and the characters.

Because not knowing for certain what’s going on in a character’s head usually makes them more interesting. It leaves more room for your imagination.

As a writer, though, which point of view should you go with? Ultimately, it depends on the story and what you want to accomplish with it.

And nothing says you can’t try more than one (using different drafts).

Perspective might sound like point of view, but it’s different. It has more to do with the storyteller’s worldview, assumptions, beliefs, and attitudes. It conveys either a personal investment in a character or an impartial distance.

Perspective is the frame or filter through which the reader meets the characters, interacts with the setting, and listens to the dialogue.

As such, it can sway the reader’s own perception, sometimes without the latter’s realizing it. Step into someone else’s perspective, and it leaves traces behind in your psyche.

It can even change the way you think about the story’s themes and overall moral or message.

It doesn’t follow that the influence is always good. By the same token, a story that causes someone to question the beliefs they grew up with isn’t necessarily a “bad influence,”

In any case, it pays to respect the power of perspective. And it’s impossible to not send a message with the perspective you have or the one you choose for your narrator (human or otherwise).

How Long Should A Short Story Be?

How Many Words Should Be In A Chapter Of A Book?

What is your story missing?

Now that we’ve covered the ten essential parts of a story, how can this help you become a better storyteller?

Have you read a story of your own only to think, “Something is missing?” Or has someone else?

The more stories you write, the more your storytelling knowledge and ability will grow and deepen. Give yourself the time and tools to learn the art and craft of writing.

And don’t forget to enjoy the best part of your research: reading good stories.