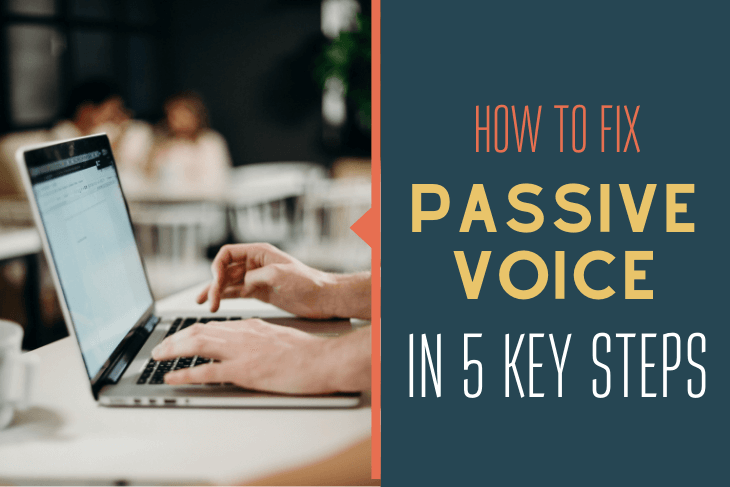 What is passive voice misuse?

How do you know if you’re overdoing it with passive voice constructions?

And is active voice always better?

If you’ve ever run your work through the Heminway Editor, you know it flags passive voice right away (along with wordy or overly long sentences).

Human editors, too, tend to bristle at the overuse of passive voice.

So, it’s a huge time-saver when you know how to recognize and correct it in your writing.

Read on to learn how.

How to Fix Passive Voice in 5 Simple Steps

The following steps show you how to correct passive voice when it makes sense to do so.

You’ll also see examples of passive voice that are just fine as they are, whether you choose to change them or not.

1. Look for sentences that turn the object into the subject.

In passive voice, the object being acted upon becomes the star of the show, taking the subject’s place ahead of the verb. The actor takes a back seat, following the word “by,” which handily points the finger to expose them.

That’s when the actor is actually mentioned in the sentence, which isn’t always the case.

Let’s break it down:

Here are a few examples of truncated passive voice:

When your sentence includes the actor— the noun that would be the subject when using active voice — it comes after the verb and takes the object’s place.

2. Identify the meaning of the sentence.

Before you can correct a sentence, you need to know what it’s saying. Read the sentence carefully to identify all the parts:

In this case, we’re talking about each noun’s relative location rather than its role in the sentence.

Once you identify the parts, you have a clearer idea of what the actor did to the object (according to its role). You know what’s happening — what the sentence means.

Now, you can rearrange the words without changing that meaning.

3. Try putting the subject (the one doing the thing) in its rightful place.

If the actor (the subject in active voice) is in the sentence somewhere, and you can identify what it’s doing, try putting it ahead of the verb in its active form, with the object following.

Here it makes sense to lead with the subject (the dragon), which is a lot more interesting than the object (today’s mail).

In this case, the actor isn’t mentioned, so a subject placeholder (“someone”) is necessary to convert the sentence to active voice.

4. Decide whether the sentence needs changing.

Take the following sentence, for example: “The pie was ruined.” Nothing in this sentence tells you who or what ruined the pie.

So, while you could write “Someone or something ruined the pie,” you’re more likely to leave the sentence as it is (in truncated passive voice) or fix the passive voice in another way. For example, you could write, “The pie is ruined,” describing its state of being.

Another reason you might use passive voice is to avoid pointing the finger at someone.

Or you might switch to active voice by changing the verb but keeping the subject as is: “The project fell apart, leading us in a different direction.”

Passive writing has its place. It’s the misuse or overuse of passive voice we’re looking to change here. Publishing house editors are more likely to put aside your work if you use passive voice indiscriminately than if you use it, for valid reasons, a few times at the most.

Here are a few examples of sentences you might leave just as they are:

Let’s say you identified the passive voice construction (be-verb + past participle) and the subject doing the thing (after the word “by”). Then you determined that, in fact, the sentence can be improved by converting it to active voice.

All that remains is for you to choose the arrangement that conveys your meaning in the simplest, clearest, and most elegant way possible.

Here are a few examples of how this is done:

Passive: This pie was made by the lovely Marie Callender.

Active: The lovely Marie Callender made this pie (She makes all my pies. We’re tight like that.)

Passive: The plumbing was destroyed by last night’s party guests.

Looking For Negative Mood Words For Your Writing? Here’s The Only List You Need

The Difference Between Tone and Mood In Writing

3 Types Of Satire Every Writer Should Know

FAQ About How to Fix Passive Voice

1. How Do I Get Rid of Passive Voice?

Before you can fix passive voice, you need to know how to recognize it. As mentioned above, the quickest way is to look for constructions with a be-verb and a past participle.

From there, you identify the subject (if there is one) and rearrange the sentence in active order: subject + active verb + object.

2. How Do you Fix Passive Voice?  3 Examples

3. How Do You Make Passive Voice Active?

Changing a sentence construction from passive to active involves the following steps:

Now that you know how to correct passive voice like an eagle-eyed editor, how will you apply what you’ve learned?

If you’d still like some help identifying passive voice in your work (or someone else’s), the Hemingway Editor can be a big help.

From there, you can try a few different arrangements for each sentence and see which one gives the best example of clarity, simplicity, and elegance. Reading them aloud helps.

You’re one step closer to becoming the kind of writer editors love. Your readers will thank you, too.