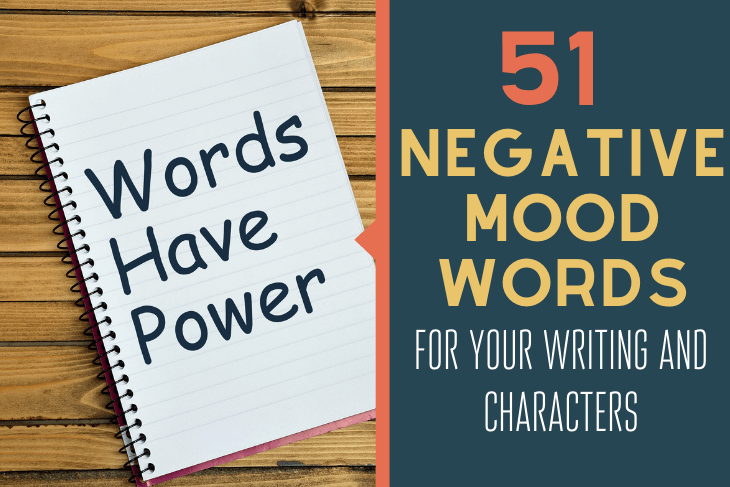 When one of your characters is going through something, how do you communicate that to your readers?

Think of a scene in one of your own stories where the protagonist is in a foul mood.

Maybe the other characters picked that up quickly enough, but did your reader?

When that magic happens, it’s all in the words you use — and the ones you leave out.

How Do You Describe Negative Feelings for Your Characters?

As a writer, you have more than one way to reveal negative feelings and moods in one of your characters:

The most effective way to communicate a character’s feelings is to make them felt by the reader — through atmospheric details and character behavior.

If you rely on your character to spell out their feelings for the reader, it won’t have the same power.

51 Negative Mood Words to Use for Your Writing

Look through the following mood list to find the words best suited to your character and scene. It’s fine if you end up changing your chosen words during edits.

The more familiar you become with your story and its characters, the better your sense of the right words to use. Enjoy the process.

2. Antagonistic / Hostile — Unfriendly even to the point of aggression (or passive-aggression)

3. Anxious / Unsettled / Apprehensive / Worried — Feeling that something bad is about to happen or is inevitable

4. Apathetic / Indifferent / Detached — Feeling or showing no interest or concern

5. Betrayed  — Exposed to danger as a result of misplaced and violated trust

6. Bored / Disenchanted / Weary — Lacking interest in or energy for something

9. Depressed / Despondent — In a state of general unhappiness, imbalance, and inability to find joy in people or experiences

10. Despair / Hopelessness — Surrendering or lacking hope or a reason to keep going

11. Embarrassed / Mortified / Humiliated — Feeling intensely self-conscious and distressed over what others might think

12. Evil / Insidious / Malicious / Malevolent — Profoundly immoral and acting with ill will or the desire to do harm

15. Freakish / Abnormal / Weird / Alien — Standing out in a way society doesn’t like

16. Frustrated — Feeling upset over an inability to change or achieve something

17. Guilty / Guilt-ridden / At Fault— Feeling or showing culpability for something

18. Garbage / Trash / Junk — Discarded by someone or by society in general as refuse

19. Heartbroken / Crestfallen — Feeling let down or crushed by disappointment

21. Inadequate / Insufficient — Lacking in something or in some way; not enough

22. Insecure / Uncertain / Doubtful — Lacking in certainty or confidence in yourself or in someone else’s regard for you

23. Insulted / Disrespected — Feeling attacked by another person’s abusive or thoughtless words or behavior

25. Jealous / Covetous / Envious / Resentful — Wanting someone else’s advantages and resenting them for what they have that you don’t

26. Lazy  / Shiftless / Indolent — Lacking the will to do what is necessary

27. Lonely / Lonesome — Feeling a need for good company or companionship

28. Lost / Homeless / Adrift — Lacking a home or knowledge of how to get there.

29. Manipulated / Deceived / Tricked — Led astray by someone intent on using you for their own purpose

Can You Start A Sentence with And or Other Conjunctions?

31. Nasty / Gross / Disgusting — Highly offensive or unpleasant to the senses

33. Numb  / Unfeeling / Desensitized — Acclimated to the point of feeling nothing

34. Oppressed /Subjugated — Controlled by someone else and treated unjustly

35. Outcast / Expelled / Unwanted / Excluded—  Rejected and pushed out by society or by a social group

37. Pessimistic / Negative  — Tending to see the worst in people or things

38. Regretful / Remorseful — Feeling or showing regret over past words or actions

39. Resentful / Bitter — Holding someone’s past offenses against them

44. Sickened / Queasy — Feeling disgusted, nauseated, or appalled by something

48. Traumatized / Scarred — Feeling deeply marked or damaged by an experience

49. Vengeful / Unforgiving / Absolutist — Seeking to harm someone in retaliation for a past offense or injury

Did you find the negative mood word you were looking for?

Now that you’ve looked through the list of negative mood words, which ones stood out for you? Which will probably find a place in your current work in progress?

Make a list of your own with the words that called out to you. Words have a way of doing that, and there’s always a reason. The words that hit home for you today may be different a year from now.

As an exercise, try freewriting with a few of these words today to see how they’ll fit into your story.