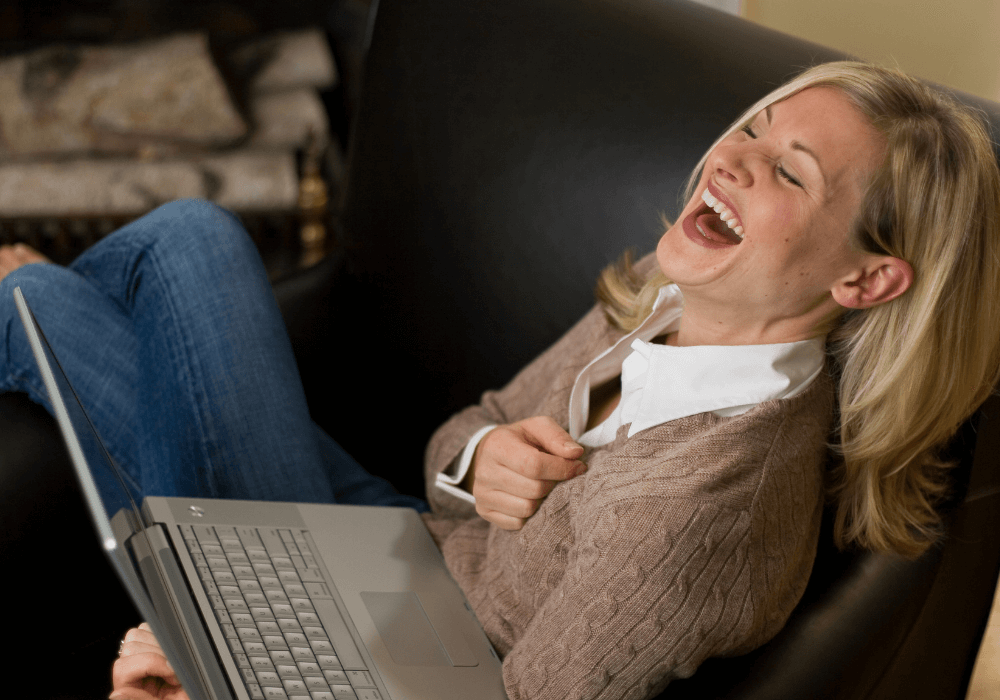 Hands up if you’ve enjoyed a funny series or movie lately and hoped the writers were well-paid for their work?

So, think of the comedy writing prompts in this post as our contribution to making the world a healthier place.

If you love to make people laugh but you’re struggling to think of funny topics to write about, we’ve got you covered.

The real challenge is deciding which prompt to use first.

Enjoy this list of 55 funny writing prompts. And keep track of those that stand out for you.

1. Write about someone trying to explain to a teacher that their dog did, in fact, eat their homework.

3. Write about a little boy accidentally switching bodies with his dad for a day.

4. Write about someone playing the perfect April Fools Day prank.

5. Write about someone who accidentally buys a fish that can talk — and it isn’t exactly polite.

6. Write about someone who is friends with a hero and a villain. They don’t keep this a secret, but it does make for some interesting conversations.

7. Write about a hero and a villain rescheduling their battle due to a scheduling conflict.

8. Write about a superhero whose greatest threat is their younger sibling.

10. Write a poem about Tupperware.

11. Write about the origin of an inside joke.

12. Write a story about someone who can’t stop saying what they think — much to the dismay of those around them.

13. Write a character with a personality based on your favorite song.

14. Write a comedy script about a food that you hate.

15. Write a story about a deck of cards coming to life. How do their personalities mix with each other?

16. Write about someone trying to escape the afterlife.

17. Write a story about a great historical figure learning how to use the internet. What do they find online when they Google themselves? Do they like it?

18. Write about a character who wakes up to find out the world is ending. Even stranger than that, everyone around them is celebrating.

19. Write a story that begins with the words, “Tuesday is always the worst day to rob a bank.”

20. Write about a woman who promised her firstborn child to several different witches. Now that a baby is on the way, she has to deal with a custody battle.

21. Write about a hero who accidentally falls in love with the daughter of their arch enemy.

22. Write about an alien race that believes ants are the most organized civilization on earth.

23. Write about Greek deities taking a class on Greek mythology. Which parts of the curriculum do they have issues with?

24. Write a story about Ares — the Greek god of war — getting trapped in the body of a preschooler.

25. Write a story about a chicken that accidentally hatches a dragon egg — much to the concern of the local population.

26. Write a story about an immortal who keeps finding increasingly creative ways to avoid the grim reaper.

27. Write about someone who takes up a career as a nanny. The adorable baby they’ve been hired to care for is, unfortunately, the antichrist.

28. Write a slow-burn love story that is narrated by a very impatient narrator.

29. Write a story in which the narrator hates the main character. This leads to lots of passive-aggressive side comments throughout the story.

30. Write a story that begins with the words, “Unfortunately, fire is not the solution to every problem.

31. Write a short story about a burned-out retail employee deciding to spend his last day messing with the worst customers.

32. Write about a farmer who wakes up able to understand what the animals on the farm are saying — on the day he was planning to butcher some of them for food.

33. Write a story about a famous Hollywood paparazzo who’s decided to retire and finds himself the object of unwanted attention (for reasons he’s about to learn).

34. Write a story where you agree to house-sit a new “smart home” for a famous celebrity. Turns out the house is a bit glitchy. And it all begins in the bathroom.

35. You’ve just finished a string of speed dates and are preparing to spend the evening alone when your attractive new neighbor asks you to watch their pet rock.

36. Write about a support group where members meet every month to discuss their mistakes and to “say anything.”

37. Your cat wakes you up one day to let you know his kind have taken over the world. If you want to continue living, you’re now his “personal assistant.”

38. The dogs of the neighborhood are meeting to build a resistance to the worst humans in the area. You follow your dog one evening and learn the truth.

39. Write about something you should NOT have tried at home — but you did, anyway, with more or less predictable consequences.

40. You buy something online and are so excited about the money you’ve saved — until it shows up.

41. You’ve started a blog based on interviews with villains, and your first interview guest has just arrived at your agreed-upon meeting spot.

42. Write a short story about a waitress who just dumped her boyfriend spending Valentine’s Day working at a restaurant, serving over-the-top romantic couples.

43. You’ve been holding it together, but when your grocery bag rips open as you’re crossing the street, something snaps… and you turn into a dragon.

44. The pharmacy absent-mindedly packages the wrong prescription for you. Fortunately, the mistake isn’t fatal to you — but it does have consequences.

45. Your new date drags you to a coffee shop that’s hosting local comedy routines, where you find, to your horror, that your oversharing dad is the main attraction.

46. You’re answering an ad for a local “expert” who promises they can rid you of writer’s block for the rest of your life. The contract is unusual, to put it mildly.

47. After days of frustrating writer’s block, a breakthrough comes at the worst possible moment. And you can’t help yourself.

48. You’ve just converted an old school bus into a mobile home to travel the country,  and after advertising for a traveling companion, you’re interviewing the top five.

49. You’ve just finished a high-stakes version of rock-paper-scissors. You’re one of the “lucky ones.”

50. Write a story that starts with “I hereby resign my position as neighborhood tooth fairy for the following reasons…”

51. You’re at an open house for a property you’re looking to buy, and you hear a loud bang. You turn to see a plume of smoke rising from the garage next door.

52. Write about an embarrassing moment that still makes you cringe when you remember it — but add a twist.

53. You’ve decided to be a stand-up comedian, and the next day, you hear a laugh track every time you say something out loud. Was it always there?

54. You agree to a blind date only to come face to face with your arch-nemesis from school.

55. You’re a superhero interviewing candidates for a sidekick position. One of your interviewees is your favorite barista, who also happens to be a supervillain.

Now that you’ve looked through the whole list, which funny writing prompts stand out as your favorites?

And how are you most inclined to begin your next story?

Think about how some of your favorite stories begin. Then commit to choosing one of these prompts today and making it your own.

Which will you write about first?