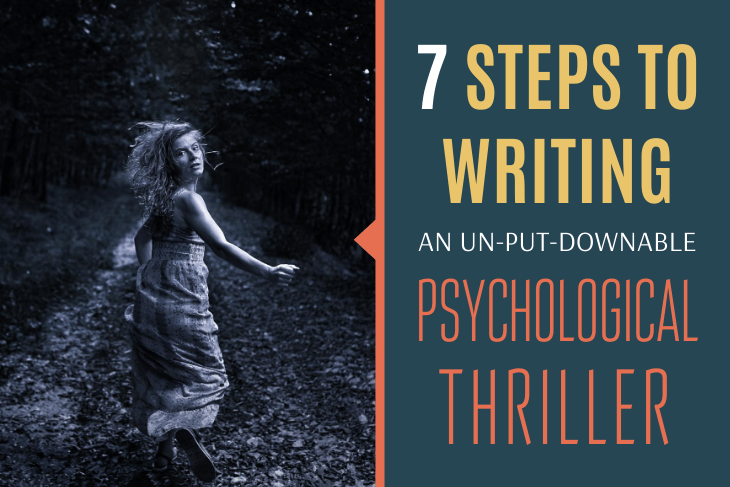 It’s not just the suspense that pulls you in.

Yes, you know something bad is threatening the protagonist, but a big part of the draw is what you get to see going on in the characters’ heads.

You love this genre so much, you want to write your own. But for starters, you need to know the elements of a psychological thriller.

Let’s start by getting clear on what it is — and isn’t.

What is a Psychological Thriller

A thriller is a fast-paced novel full of nail-biting suspense, high stakes, and shocking twists.

Add the word psychological, and you get a thrill ride that shows you what’s going on in the heads of characters — usually the protagonist, but sometimes the antagonist (or both).

While both deal with inner conflict or inner threats, some key differences set them apart:

What makes a good psychological thriller?

A good psychological thriller takes a firm hold of the reader’s attention and doesn’t let go.

The surprising twists and steady stream of cliffhangers make for a fiercely engaging thrill ride.

Do it right, and your reader will recommend your novel and your name to all their fellow adrenaline junkies.

The end is where you tie it all together in a way that makes your reader clutch your book to their chest, take some deep breaths, and fill their TBR list with more of your titles.

So, how do you do this? And what makes a psychological thriller impossible to put down?

7 Steps to Writing a Psychological Thriller

Now that you know the elements of a psychological thriller — the kind you’d want to read — let’s go through the steps for creating one. Just imagine what you’ll feel when one of your readers tell you they sleep with the lights on, now, thanks to you.

1. Write what your readers know.

Draw your readers in with familiarity — in your settings, your character’s problems, your themes, etc. Create a world that feels homely and relatable. Include themes or causes your readers care about.

Think of how much easier it is to get caught up in a story when you can easily picture or relate to what the author is saying. The more familiar it feels, the faster you connect with it, and the more you care about what’s happening — or what might happen.

2. Make your protagonist familiar and flawed.

Give your readers a protagonist they can root for. Most thriller protagonists are female — with familiar problems and relatable flaws. It’s their familiarity that can make the reader think, “That could be me.”

The most relatable protagonists are regular people. They’re not invincible or all-knowing.

The reader has to believe in the possibility that the heroine will lose. So, the threat has to be menacing enough to make the reader afraid for the main character.

Relatable characters are flawed ones. Many of the same fans who love characters like Natasha Romanoff/Black Widow and Loki (MCU) feel disappointed when they learn that Wonder Woman (DC) is an actual goddess with no apparent character flaws.

Your readers also want to know what motivates your protagonist: what do they want most? And what are they afraid of?

Get your reader’s gut in a knot from the get-go. Open with action that draws your reader right into the scene. With psychological thrillers, much of that tension is internal; it’s in the protagonist’s head.

Someone or something (the antagonist) is creating problems for the main character, whose inner conflict plays a major role in the developing story.

Thrillers have to be fast-paced. And they have to grab your reader’s attention right away. Give them a reason to want to keep reading.

Make them curious and keep them in agony until all is revealed.

17 Things to Write About For Your Next Nonfiction Book

Try writing a thriller about someone who may or may not catch his coworker’s head cold (which would be inconvenient but not fatal), and no one will read it.

Turn that common cold into a deadly virus that’s especially virulent in children, and give the protagonist a young child who is their main reason for staying alive, and suddenly the stakes are high enough for the reader to care.

Don’t make your reader wait too long to learn how high those stakes are.

5. Make things difficult for your protagonist.

Make it hard for your heroine to get information or tools she needs. Keep them in the dark about something while the clock is ticking and the looming threat draws nearer.

Make them (and your reader) sweat for it. It’s a good pain.

With one mini cliffhanger after the next, keep your reader wondering if your heroine has what it takes to meet every challenge and come out the winner. Let them see her struggle. And show what it does to her inside and out.

Readers love an underdog. Show them what your heroine is up against. And make victory expensive for her.

6. Shock your readers with a plot twist.

One of the things thrillers are known for is the shocking twist. This isn’t just a “Well, whaddya know?” kind of twist, either. It’s a “Wait?… What? NO! How is that even…? This changes EVERYTHING!” kind of twist.

If your reader sees it coming, it’s not a twist. It’s more of an interruption. Picture your reader muttering, “Wait… So, you thought I needed you to spell that out for me? Lame.”

Cut out everything that slows the pace, and keep the reader’s gut twisting with what ifs and other disturbing thoughts. Keep them guessing with an unreliable narrator. If your reader is asking themselves, “What is this narrator not teling me?” they’ll make a mess of their fingernails until they learn the truth.

7. Give your readers a satisfying ending.

After you’ve spent most of your novel keeping them in a state of unrelieved tension, your reader deserves a satisfying ending for your story.

Resolve your heroine’s situation in a way your reader will find believable and worth the wait (and all the time they spent worrying). Don’t cheat and pull a rescue out of thin air.

Give your audience a reason to be glad about the outcome for the protagonist. Maybe their victory in the end leads to a breakthrough in some other area of their life. Or maybe the story ends with an unpredictable and satisfying twist.

Whatever happens, let there be some justice for your main character. Bonus points if you get your reader fist-pumping or doing a victory dance.

Don’t linger on the “happily ever after” stuff, but don’t leave your reader hanging, either.

Ready to write your psychological thriller?

Again, since this is a thriller (not a horror novel), your reader should be afraid of what could happen or what the antagonist is trying to make happen.

You want them to be genuinely afraid that the protagonist’s best won’t be enough.

This is something most of us can relate to. Use that.

Take the the elements of suspense and combine them with the thrill of a surprising twist, and you have the makings of a novel that will keep your reader on the edge of their seat, needing to know more, and fearing the worst.

Then lead them to an ending that makes it all worth it.