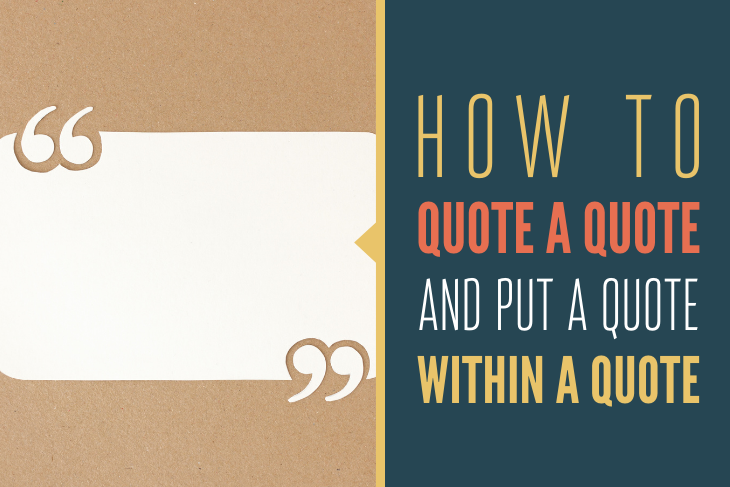 Punctuation rules are tricky enough to remember when they’re consistent for all English readers.

But they’re not. And quotation marks are a great example of that. Just when you think you’ve got a handle on how to quote quotes and how to punctuate a quote within a quote, you read something from across the pond.

Suddenly, up is down, and broccoli is the new chocolate. The world no longer makes sense.

But before you fold your arms and narrow your eyes at your neighbors across the way, rest easy.

American and British English have their differences, but the rules are pretty straightforward on both sides.

They just happen to be nearly the exact opposite.

So, if you’re ready to learn the rules on how to quote a quote — whether you’re writing in American or British English — read on.

How to Quote a Quote

With American English, you begin with double-quotes. With British (and Australian) English, though, you do the opposite.

So, for American English, you would use quotes this way:

Example: For the Christmas concert, our class is singing, “The Twelve Days of Christmas.”

But British and Australian English would enclose the song title in single quotation marks.

Example: For the Christmas concert, our class is singing, ‘The Twelve Days of Christmas.’

Punctuation is also a bit different. With American English, periods and commas are always placed inside the quotation marks.

In the UK and Australia, though, they place full stops and commas outside the closing quotation mark – unless the quotation itself is a complete sentence.

Example A: I enjoyed her article, ‘Ten ways to make sure you stay broken up’.

Example B: ‘She just gave me a strange look and said, “I cannot believe you would pair red wine with shrimp cocktail.” It’s like I don’t even know her, anymore.’

As for dashes, semicolons, question marks, and exclamation points, they stay outside of quotation marks unless they belong to the quoted material.

Example: He walked in and said, ‘Well, dinner smells terrible. Who wants take-away?’

This is the one case where punctuation within quotes is the same in the UK, Australia, and the US.

Should You Capitalize After A Colon?

How to Quote a Quote Within a Quote

When it comes to quotes inside quotes, American English begins with the double quote. Quotes within quotes get single quotation marks.

British and Australian English, on the other hand, do the exact opposite:

American English keeps that period cozied up to the quoted content, but British and Australian English let it stand out a bit.

This article doesn’t delve into the psychology behind that. And the period has been silent about the whole thing.

Did these tips on quoting quotes help you?

If you found value in this post, would you please pass it on to help your fellow writers?

You might think, “Well, most people already know this stuff,” but if you took the time to read this post, chances are others will be grateful for the information.

And for most of us, a refresher on the basics doesn’t hurt. Even better when it gets to the point and keeps it light and lively.

We hope you enjoyed it enough to share it.

And may your thoughtfulness and sense of humor influence everything else you do today.