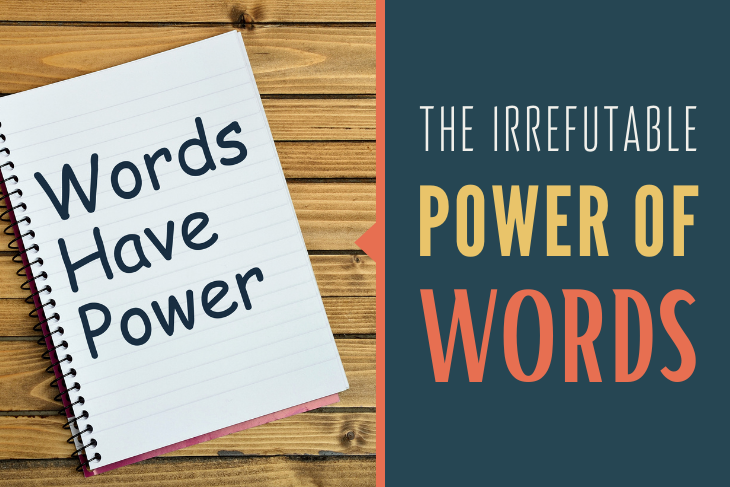 You’ve experienced the power of words in a way you will never forget. Even now, the memory lingers.

How could a few small words have such a big impact on your life?

Words have power. And only when you experienced that power yourself — either as the giver or as the receiver — did you begin to understand it.

You can use the power of words to heal or comfort others. Or you can use it to tear them down. Your character shapes and is shaped by the way you use this power.

So, how can you make the most of it?

Examples of the Power of Spoken Words

When was the last time you heard spoken words that changed your perspective on something or someone? Maybe the words felt like a sucker punch.

Or maybe they lit you up inside and inspired you to make a change.

Now, see if you can recall any memories of negative words for each of these samples.

Are there songs you find difficult to listen to because of the negative lyrics? Or have you been avoiding someone because of a recent negative outburst?

Maybe you’re thinking of negative words you’ve never heard but that felt, in your mind, as though they’d been spoken aloud – and directly to you.

Examples of the Power of Written Words

Written words also have power — for the one who writes them and for those who read them.

You’ve felt this power. And maybe you’ve wielded it yourself.

Maybe you even consider it your superpower. You’re not wrong to call it that.

Never underestimate the power of a thoughtful note — or a love poem — or a compelling story.

The right words draw you in and build connections. The wrong words destroy relationships or prevent them from ever being built.

This is why marketers pay well for effective copywriting.

If your words can connect with your target audience and persuade them that paying for a particular product or service will change their life for the better, you most definitely have a superpower.

Use it for good.

Why are words so powerful for humans?

Humans are the only species on this planet that has the power of speech and of the written word (as far as we know).

But in spite of the creative potential this power gives us, we spend more time exploring its destructive potential.

And we sabotage our own health and happiness when we do.

According to functional MRI scans (fMRI), just looking at a list of negative words (including the word “NO”) worsens anxiety and depression.

And dwelling on those words can actually damage key structures in the brain — including those responsible for memory, feelings, and emotions.

Vocalizing that negativity releases more stress hormones, not only in you but in those who hear you.

Even silent worrying (about money, relationships, work, etc.) stimulates the release of neurochemicals that make you and those around you feel worse.

Empaths are particularly sensitive to this, but everyone around you is affected to some degree. And you as the ruminator suffer the most.

So, how can you turn things around?

7 Tips for Making Your Written and Spoken Words Powerful

“Words have the power to both destroy and heal. When words are both true and kind, they can change our world.” — Gautama Buddha

Trust is built on honesty; people want to know they can depend on you to tell them the truth, even when it hurts to hear it (and even if it makes you look bad).

There are times when lying can save a life. But in most cases, with relationships, a reputation for lying will rob you of your power to connect with them.

Without truth behind them, your words lose their meaning and become empty noise.

Saying “You never….” or “You always…” to berate others ensures that your negative message about them (which is personal) will eclipse whatever message you’re trying to send.

Very few people are consistent enough to “always” leave the toilet seat up or to “never” take out the garbage. And they know that.

So, if you accuse them of a perfect record of thoughtlessness, their own disagreement with your memory will make it difficult to pick up on the underlying request.

Double standards are when you have different rules or different expectations of two or more different people of equal ability in the same situation.

For example, if your employer, Biff, tells one employee, Jack, that all he needs to do is X and Y but then he tells Sally she’ll have to X, Y, and Z — and in less time — to receive the same reward (or 79% of it), he’s using the power of words (and money) to impose a double standard.

And once he does and word gets around, Biff’s own words will create an atmosphere of injustice.

No one wants to work for an employer who devalues and exploits others.

9 Of The Best Writing Podcasts For Authors In 2019

4. Don’t use your words to manipulate others.

Marketing isn’t about using words to pressure or manipulate people into spending their money on whatever you’re selling.

Neither is it about competing with other marketers to see who can use their words more effectively to make customers feel things.

If the only reason you’re trying to build a connection is to get something from the other person, they’ll pick up on that.

And even if you do persuade them to buy something, it’ll leave skid marks in their memory.

They’ll remember you as someone who used the power of words to line your own pockets at their expense. And their regret is your loss.

5. Be consistent in what you say.

Consistency is saying or doing the same thing regardless of the circumstances, as long as those words or actions still apply.

It is possible to overdo consistency. And none of us is perfect.

But when it comes to the power of words, you don’t want to give anyone the impression that your words and actions will change whenever you feel the slightest pressure to change them — regardless of the consequences.

If someone’s words change too easily, they’re the verbal equivalent of shifting sands. You can’t build anything on them that won’t fall apart.

Fickle words have no power.

A daily mindfulness practice trains you to be aware of your thoughts and feelings, without judging them.

So, you can acknowledge that someone’s words or actions have made you feel devalued or manipulated.

But you don’t have to avenge your ego by using words as defense weapons.

You retain your power when you take a step back and use your words to restore balance instead.

When you use the power of beautiful words to express empathy rather than anger or condescension, you put the good of the souls involved ahead of your own impulses. You might also enjoy these mindfulness journal prompts.

7. Use words to benefit others.

Karma demands that we pay for every unkind word we speak or write. Every time we use the power of words against another soul, we guarantee that, sooner or later, we’ll experience the same pain we’ve inflicted.

Think of that the next time you look back at a conversation and wish you’d used the comeback that came to mind a half-hour later.

Or, better yet, think of that when you’re about to say (or write) a scathing response to someone who has verbally attacked you.

Even if you succeed in turning their own words against them, you’ll eventually realize that the victory wasn’t worth the alienation you caused.

Use your power to build them up instead.

Will you take advantage of the power of words?

Asking questions instead of resting on statements is another way to benefit from the power of words.

If you pride yourself on keeping an open mind — about people, ideas, and situations — you should be using words to ask more questions rather than to utter statements no one is allowed to question.

The words you speak can either promote growth and connection or undermine it.

May the words you choose bless everyone who hears (or reads) them today.