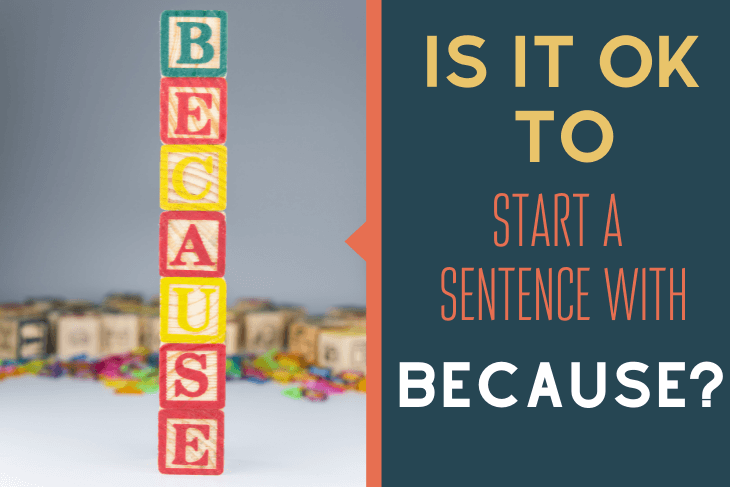 Can a sentence start with because?

And it deserves a clear and well-considered answer.

If you’re like many of us, your elementary school grammar teachers taught you never to start a sentence with a conjunction.

Starting a sentence with because comes second nature in everyday speech and informal writing.

It’s less common in more formal writing, but that doesn’t make it wrong.

So, how do you do this the right way?

And is there a wrong way you should know about?

What Is the Word “Because”?

According to Macmillan Dictionary, we have three choices when it comes to using the word “because” properly:

In all cases, the word “because” points to the reason behind something. And unlike our grade school textbooks, dictionaries like Merriam-Webster don’t shy away from defending the use of because at the beginning of a sentence as “acceptable and widespread.”

So, what does that look like? And how do you know if you’re using “because” correctly?

Can You Start A Sentence With Because? 3 Examples of When It Works and Why

Each of the following examples involves either speech or informal writing. Many of the grammar rules we learned in school apply specifically to formal writing.

So, it still makes sense to avoid the following when you’re writing an academic or professional report:

Everyday speech doesn’t play by the rules. It doesn’t mean the rules are no longer valid—just that they’re not absolute. They have limits.

Read through the following examples to see when it makes sense and is perfectly correct to start a sentence with “because.” How many have you used?

And, on a scale of 1 to 10, how vindicated do you feel after reading this?

#1 — To start a subordinate clause connected to the main clause

In this case, we take a sentence with a main clause followed by a subordinate clause beginning with “because,” and we flip it. With the following examples, each of the subordinate clauses would be independent ones without the word “because.”

Who’s going to argue with Emily Dickinson?  (We don’t recommend it.)

In the following examples, the subordinate clause is a (dependent) prepositional phrase starting with “because of”:

With dialogue, this is always acceptable, though it can work outside dialogue, too. In the following examples, “because” introduces a sentence that would be complete without it.

You wouldn’t typically use this construction in formal writing, but with dialogue, pretty much anything goes, as long as it makes sense. The next example takes it a step further.

The usual rules that require a complete sentence don’t apply to dialogue, which should reflect how real people talk. Casual conversation doesn’t have to conform to strict grammar rules. And for that, we give thanks.

Now for some examples. Because blogging, which is more conversational in nature, has a way of breaking rules, too.

The word “because” doesn’t turn a fragment (much less a word) into a complete sentence. But this usage does reflect everyday speech.

And that’s the hard and fast rule for correct and believable dialogue.

Final Note: Commas Before Because

You probably noticed the comma between the clauses in the sentence examples starting with “because.” If we were to flip those, though and put the “because” clause after the main one, the comma would disappear:

You don’t need a comma before because unless the preceding main clause is a negative one, as you’ll see in the following examples:

In each of these examples, taking out the comma would change the meaning of the sentence or make it unclear. Did you not buy the dress because of the price? Or did you buy the dress but not because it was expensive?

If you need a comma to make your meaning clear, use one. If not, save yourself a keystroke.

Now that you’ve looked through all the examples that show when it’s perfectly okay to start a sentence with “because,” which are most familiar to you? And which do you see most often in your own writing?