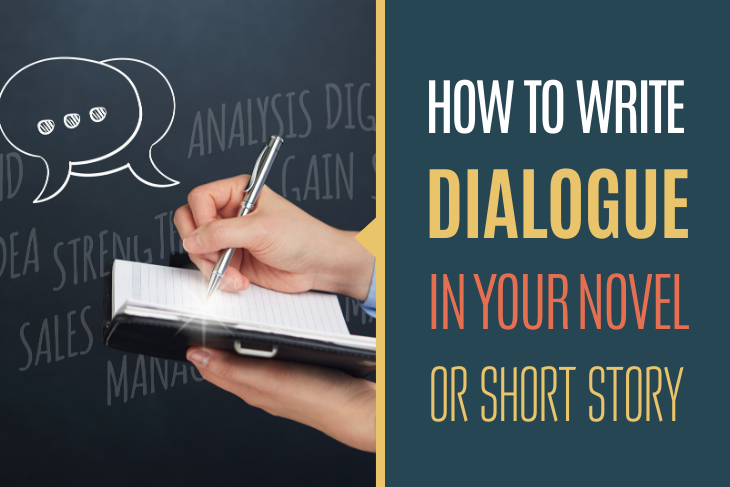 The problem? You’re too busy thinking, “What was the author thinking?” to focus on the story being told.

It’s jarring or riddled with wordy dialogue tags. As a reader, it makes you put down the book and move on.

As an author, you realize how essential it is to write dialogue that keeps the reader locked into your story.

Are you confident in the art of writing dialogue? If you need some help, we’ve got you covered.

It’s not all about the words, either.

The right punctuation is what enables your reader to hear exactly how the character would sound when speaking those words.

Think of them as set instructions — or as clues for the actors.

Without them, your characters are just spitting out words without taking a breath or giving any of the words added emphasis.

No one wants to listen to an hour of robotic run-on sentences.

Think of what the following punctuation marks bring to a sentence:

When it comes to punctuating and formatting your dialogue correctly, please keep the following rules in mind:

The best way to learn the art of writing dialogue is to read great examples of it from other authors. You can also pick up clues by eavesdropping on interesting conversations and by keeping a dialogue journal with your personal observations and snippets of conversation.

To start you off, let’s consider a few here.

Example #1 from Gone With the Wind: by Margaret Mitchell

This scene takes place right after Scarlett slaps Ashley and he walks out of the library. Note the near absence of dialogue tags.

Scarlett, in a fit of pique, throws a porcelain bowl against a marble mantelpiece. A man’s voice says, “This is too much.”

It’s that rogue from Charleston, Rhett Butler! And he was lying on the couch , unseen, as her scene with Ashley unfolded.

“It’s bad enough to have an afternoon nap disturbed by such a passage as I’ve been forced to hear, but why should my life be endangered?”

“Sir, you should have made known your presence.”

“Indeed? But you were the intruder…”

“Sir, you are no gentleman.”

“An apt observation. And you, Miss, are no lady.”

Rhett Butler brings a different agenda and energy to the scene, taking it in a different direction without confusing the reader.

The tension between him and Scarlett creates a new dynamic and quickly rescues the story from the high school hallway drama between Scarlett and Ashley.

Without Rhett, the story would have ended there.

Hemingway didn’t shy away from dialogue tags, but he kept them simple and few in number.

And in this short story (among his best known), rather than spell out what the couple is talking about, he uses atmospheric details, dialogue, and body language to communicate the thing both characters avoid naming.

“The beer’s nice and cool,” the man said.

“It’s really an awfully simple operation, Jig,” the man said. “It’s not really an operation at all.”

The girl looked at the ground the table legs rested on.

“I know you wouldn’t mind it, Jig. It’s really not anything. It’s just to let the air in.”

The girl did not say anything.

“I’ll go with you and I’ll stay with you all the time. They just let the air in and then it’s all perfectly natural.”

“Then what will we do afterward?”

“We’ll be fine afterward. Just like we were before.”

“What makes you think so?”

Hemingway’s use of compression with his dialogue — using minimal language but somehow communicating more meaning — makes him a popular author for new writers to imitate.

Not only does it make for easy reading; it creates a clear and uncluttered image of the situation, revealing the subtext in each conversation.

Example #3 from Beloved by Toni Morrison

Morrison is known for developing her characters through vivid dialogue.

‘Something funny ’bout that gal,’ Paul D said, mostly to himself.

‘She’s not strong. She can hardly walk without holding on to something.’

‘That’s what I mean. Can’t walk, but I seen her pick up the rocker with one hand.’

‘Don’t tell me. Ask Denver. She was right there with her.’

Morrison uses different voices and perspectives for her characters to create tension and get the reader wondering if there really is something about “that gal” that the character arguing with Paul D doesn’t know.

The following rules have more to do with your dialogue content than with its formatting and punctuation. Keep these in mind to make every word of dialogue count.

You want it to be believable, yes. But most real-life dialogue is boring or hard for the average eavesdropper to make sense of. Cut out the clutter, the needless interruptions, and the pointless tangents. Make it better than the real thing.

Otherwise, why expect your reader to care about the conversation? Give each party to the conversation a different goal or agenda. Figure out what each character wants before you write their dialogue.

Good dialogue is clear and concise.

You don’t want a succession of short, choppy lines. Neither do you want to confuse or bore your reader with cluttered sentences.

Some characters may be more long-winded than others, and that’s fine. Just don’t add more padding than you need.

The easiest prose to read is often the hardest to write. But if you have to choose whether you or your readers should have an easier time getting through your time, I hope you choose your reader.

Using alternatives like “replied,” “stated,” “exclaimed” (my personal nemesis), or “inquired” will only mark you as an amateur. Put that thesaurus back on the shelf. Your editor and your readers will thank you.

Less is more with dialogue tags.

Not every line of dialogue needs a dialogue tag. You can use context to indicate who’s talking. You can also use different talking styles. Using “he said” or “she said” with every line slows things down.

Effective dialogue tags do not use mannerisms.

Your character can laugh and then say something. But they cannot laugh words — or sigh, grin, or smile them. It can’t be done. If the situation calls for more emotive tags, you can use “whispered,” “shouted,” etc.

Good dialogue gives each character their own voice.

Not all characters sound the same. Some differentiation helps the reader keep track of who’s talking, even in the absence of dialogue tags. It also helps develop character.

People generally do things while they’re talking. They might be dusting, or looking for something, or pouring something into a glass. Use those details to reveal more of your character or setting.

Good dialogue fits the pace of your story.

Make the pace of the dialogue fit the characters, the setting, and the story being told. Let it guide the reader along and keep them interested.

No one will miss it. So edit thoughtfully.

Dialogue is not the place for info-dumping.

You can certainly share important details in dialogue. But don’t overwhelm the reader with a long-winded backstory.

As long as the interruptions add to the story and to your character development, use them to add tension.

Writing Dialogue in a Book

Writing dialogue in a novel is different from writing it for a short story. And with novels, your chosen genre will also influence your dialogue.

In longer works, your dialogue may share more backstory and reveal more of each character’s agenda, without spelling it out.

Though every major character gets more time on the stage, every line has to earn its place.

Every line has to matter.

Writing Dialogue in a Short Story

Economy of words is of paramount importance with short stories, and that extends to dialogue.

Though no story benefits from bloated dialogue, dialogue for short stories — and especially for flash fiction — has to make every word count.

The best way to learn how to write dialogue for short stories is to research those that have won awards, those with a high overall rating on their sales pages, and those that have found their way into award-winning collections.

Try looking up “best short stories” on the internet and read the ones that pique your curiosity.

Or look up collections by well-known authors like Flannery O’Connor, Stephen King, Neil Gaiman, or any of the authors named above.

How To Write Flash Fiction

First Line Generator: 49 Sentences To Get You Started Writing

Now that you know how to write dialogue that will keep your readers interested, what project has your attention right now? Are you trying your hand at flash fiction or working on something longer?

The best thing about learning how to write compelling dialogue is the perfect excuse to read fantastic examples by authors who were once in your shoes.

Make time to learn from them, as they’ve learned from others. Savor the stories they tell and the dialogue that brings those stories to life.

Then write, write, and write some more. Practice every day to hone your craft.

And share your work with others. The more risks you take, the sooner you’ll reach the day you can announce the debut of your new novel.

And the sooner others will be asking you, “How did you learn to write dialogue so well?”