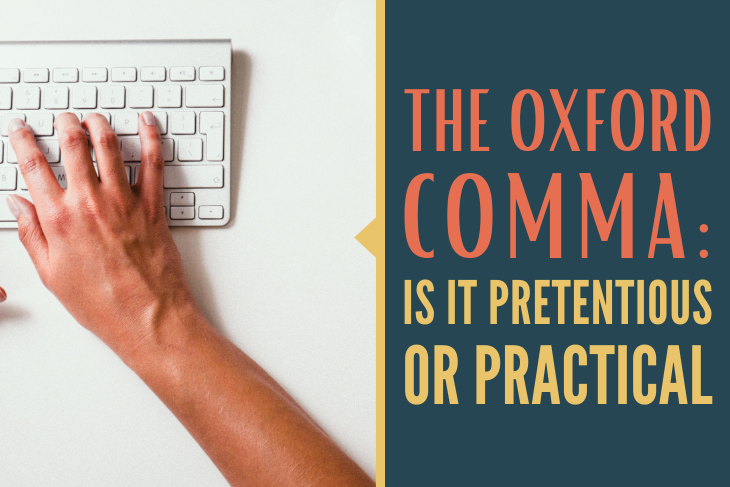 What the heck is the “Oxford comma?” you might ask.

Very good question. I’ve known what it is for a long time — I just didn’t know it had that very upper-crust name attached to it.

You’ve probably used it, or seen it, or debated about using it yourself. I just used it in the previous sentence.

Can you guess what it is?

The Oxford comma (also known as the serial comma or the Harvard comma) is the comma that appears after the final item in a list of three or more items before the word “and” or “or.”

Before the party began, Mary prepared all of the food, cleaned up the kitchen (here comes that Oxford comma), and chilled the wine.

If you are just realizing you never use the Oxford comma, please don’t hyperventilate. Using the Oxford comma is optional, or at least it’s stylistic, meaning that some style guides require it while others do not.

The style guide that newspaper reporters use, AP Style, doesn’t require use of the Oxford comma. So the example I used above would read like this without the Oxford comma:

Before the party began, Mary prepared all of the food, cleaned up the kitchen and chilled the wine.

The Oxford comma is used more often in non-journalistic prose. It’s fairly standard in the US but not often used in the UK, Australia, or South Africa. As an English major in a US university, I was taught to use it as the norm.

However, some view it as pretentious and unnecessary, making a sentence feel stilted and choppy. Says Business Insider writer Gus Lubin, “The grammar snob’s favorite mark is just a waste of space.”

There are times, however, that using an Oxford comma becomes necessary or at least practical for the clarity of your sentence. In fact, leaving it out can make your sentence sound silly or awkward.

Take this sentence for example:

My 5-year-old loves her teachers, Mary Poppins, and Cinderella.

The meaning is clear with the Oxford comma included. The 5-year-old loves three things — her teachers, Mary Poppins, and Cinderella.

But without the Oxford comma . . .

My 5-year-old loves her teachers, Mary Poppins and Cinderella.

The lucky little girl is taught by two Disney characters.

Of course you could rearrange the sentence to retain the meaning and leave out the dreaded Oxford comma if you find it offensive and pretentious.

My 5-year-old loves Mary Poppins, Cinderella and her teachers.

In my research for this post, I found two opposing Oxford comma camps who are quite vocal in their feelings — those who love the comma with a blind fervor and those who loathe it with an impassioned fury. Who knew such a tiny little swoosh could hold so much controversy?

Related: Should You Italicize Book Titles

My opinion regarding this little mark lingers in the middle. Use it when it feels right. Leave it out when it doesn’t. Since you have the option, you get to be the master of your comma’s fate. Lest you remain confused, here’s an opinion that sums it up nicely by writer and grammar expert Stan Carey:

The Oxford comma is one of those in-group niceties that some wordsmiths use to mark their editorial or writerly identities. It has become a sort of tribal badge of style, reinforced by whether your preferred authority prescribes it – for example, the Chicago Manual of Style strongly recommends it, while the AP Stylebook says leave it out.

It’s remarkably divisive, so I’ll restate for the record that I’m not a die-hard Oxford comma user or leaver-outer. I like it, and I tend to use it, but not always. Neither its use nor its omission is a universal solution – ambiguity can arise either way, so it doesn’t make sense to be inflexible about it.

Are you an Oxford comma fan? Or do you see it as “just a waste of space” like Gary Lubin? Yes, there are more important things in this world to argue about, but perhaps a shift from world chaos to Oxford commas is a worthwhile distraction.