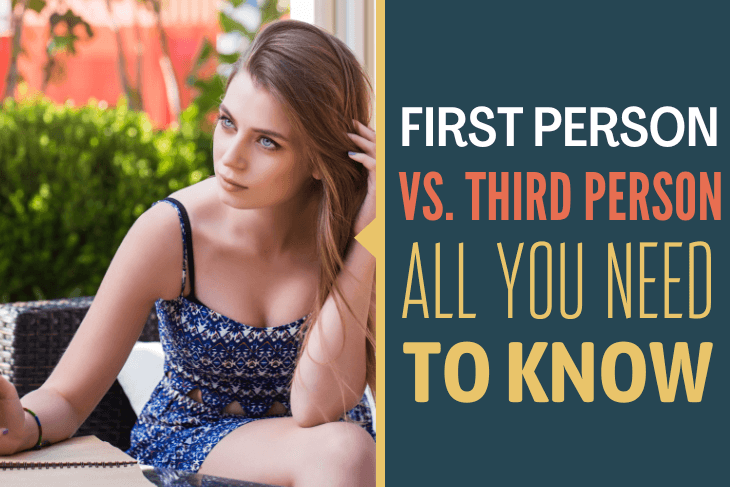 When it comes to first-person vs. third-person, some writers choose their “person” based on the books they’ve read.

After all, if Harper Lee and J.D. Salinger can make first-person work to their main character’s advantage, why can’t they? Or, maybe, after reading the Harry Potter series, they think, “Third-person is definitely the way to go.”

But why not lay out all the advantages and disadvantages of both, so you can make an informed decision? Even then, you might try one and then switch to the other.

Knowing the differences, though, can give you a healthy headstart.

What’s the difference between first-person and third-person?

The main difference between them is their point of view of the story and its characters.

A first-person narrator uses “I” and “we” and speaks as one of the story’s characters — often the protagonist but not always. (Ever wanted to write a first-person POV novel from the villain’s point of view?)

The third-person uses “he,” “she,” and “they” and speaks as someone outside the story — not as one of the characters.

To get a better grip on 1st person vs. 3rd person, though, we need to look deeper and explore some of the best examples of both.

First-person point of view, of course, can only speak for the narrator and can only see things through the first-person narrator’s eyes.

First-person establishes a kind of intimacy between the narrating character and the reader. It also invites the reader to identify with the one narrating the story from their perspective.

First-person is more subjective than third-person, which can be a problem if the reader finds it difficult to identify with the narrator’s attitudes, reactions, and general worldview.

If they do resonate with the reader, though, first-person can draw the reader in more effectively than a dispassionate third-person narrative of the same story.

Build a personal connection with the reader, and they’re more likely to stay with you to the end.

“I could not unlove him now, merely because I found that he had ceased to notice me.” — from Jane Eyre by Charlotte Bronte
“And I like large parties. They’re so intimate. At small parties there isn’t any privacy.” — from The Great Gatsby by F. Scott Fitzgerald
“Once upon a midnight dreary, while I pondered, weak and weary / Over many a quaint and curious volume of forgotten lore” — from “The Raven” by Edgar Allan Poe

Gulliver’s Travels by Jonathan Swift
The Catcher in the Rye by J.D. Salinger
Rebecca by Daphne DuMaurier
To Kill a Mockingbird by Harper Lee
The Hunger Games by Suzanne Collins

The third-person narrator speaks as a storyteller/observer who knows more than the characters. As such, the choice of third-person gives the author two options:

With third-person, you can show the readers things the characters can’t see — or that they don’t take notice of until later.

You can also tell parts of the story from different characters’ perspectives, while still leading the reader along as the story happens.

With first-person, typically, the narrator is telling the reader a story that took place in the past. With third-person, unless the story is in the past tense, the reader experiences the events in the story as they happen.

“The goose shouted to the nearest cow that Wilbur was free, and soon all the cows knew….” — from Charlotte’s Web by E.B. White
“It was a bright cold day in April, and the clocks were striking thirteen.” — from 1984 by George Orwell
“A dreamer is one who can only find his way by moonlight, and his punishment is that he sees the dawn before the rest of the world.” — Oscar Wilde

99 Positive Words That Start With E To Describe A Person

First-Person vs. Third-Person: Which Point of View Should You Choose?

If you’re not sure whether to write your story in first or third-person, try writing a few chapters in one and then the other.

Then, after giving yourself some distance from them, read them through and decide which one makes you want to keep going with the same point of view.

You can also ask willing beta readers to give their honest opinion on which one they’d want to keep reading (more than the other).

First-person gives you the following advantages over third-person:

It draws the reader right into the narrating character’s head.
It can be conversational and familiar.
Readers who can relate to the narrator feel more invested in the story.

Third-person gives you the following advantages over first-person:

An omniscient narrator lets the reader see more of what’s going on in the story.
A limited narrator can still offer multiple perspectives (one at a time).
You can switch perspectives from one part or chapter to the next.
A third-person narrator is typically more objective and reliable.
You can jump around in time instead of sticking with a linear narrative.
You can still inject first-person POV into the story when one character is speaking.

So, unless you need a subjective narrator with a vested interest in what happens to the characters, third-person is probably the best way to go.

But if you start with that, and you’re just not feeling it, nothing says you can’t rewrite it in first-person and play “Who wore it best?”

If you’re writing a nonfiction book, you have more options when it comes to POV:

Second-person is pretty rare in fiction, but nonfiction authors use it whenever they want to address the reader directly.

A good example of this is the call to action at the end of a blog post or chapter.

And that leads us to another point: nothing says you have to use one and only one “person” throughout your book.

Too much second-person can feel preachy or bossy. Too much first-person can make your work feel like it’s all about you.

And too much third-person can make your writing sound too academic or detached.

Try mixing it up. And if you’re not sure it’s working, find an editor who can help you spot the weaknesses in your approach and make helpful suggestions.

Are you clear on first-person vs. third-person?

Now that you’re more familiar with the differences between first-person and third-person and the advantages (and pitfalls) of each, which are you inclined to try first with your next book?

Whatever you start with doesn’t have to be the one you stick with. Experiment with different voices and see where each one takes you.

If you want more of a nudge in one direction or the other, go with third-person — at least to begin with — especially if you want your story’s narration to be more or less objective.