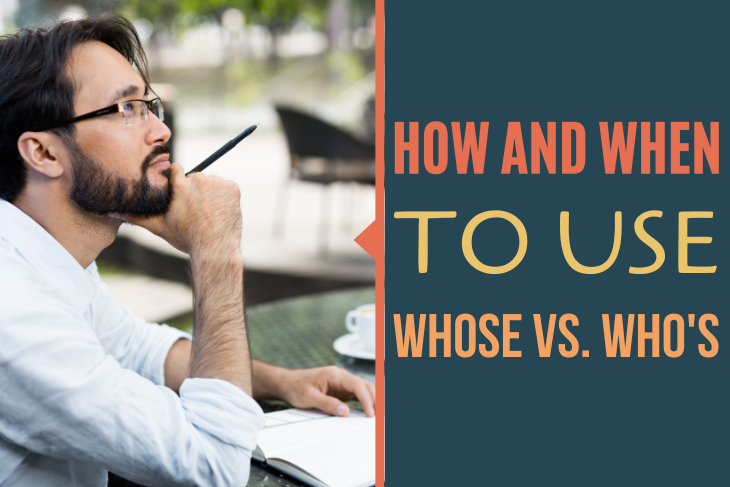 You’re staring at the sentence, but the answer isn’t coming to you. “Is it whose or who’s?”

You know this one. Or you’re sure you knew it at some point.

What’s the rule? How are you supposed to know which one to use?

“Where does Google weigh in on this?” you ask, tapping your question into the search field.

Welcome to the Authority Pub guide on how and when to use whose vs. who’s.

How and When to Use Whose Vs. Who’s

Fortunately, the English language comes with rules that clearly distinguish whose and who’s — as well as other homophones.

Those are words that sound exactly the same but mean something completely different:

You get it. Read on to learn what “whose” and “who’s” both mean and how to use each.

When to Use Whose

If you can answer the question, “Are you showing possession?” with “yes,” the word you need is whose.

As you’ll see in these and other examples, the word that comes after “whose” is always a noun. It’s the thing “whose” is describing.

You also use it when you’re asking a question about possession.

You would not use it to mean “who is” or “who has,” both of which can be shortened to the contraction “who’s.”

When to Use Who’s

The question to ask here is “Can you put ‘Who is’ or ‘Who has’ in its place?” If the answer is yes, you need “Who’s,” which is a contraction. That’s two words joined together by contracting the second word and attaching the two with an apostrophe.

If you can’t substitute “Who is” or “Who has” without changing the meaning of your sentence (or making it hella awkward), “who’s” won’t work either.

Also, if the word that comes next is a noun, and you’re showing possession, the word you need is ‘whose.”

Whose and Who’s Sentence Examples

Here’s a brief summary of the rules:

To further cement those rules in your head, here are some examples that show the correct usage for both who’s and whose.

5 Of The Best Writing Prompts Books

When should you use whom instead of who?

In each of the simplest “whose” constructions, you can rephrase it as “To whom does ____ belong?”

Longer sentences get messy when you try that, but this brings us to another common who-related question: When should you use whom instead of who?

There’s a simple rule to tell them apart:

So, you’ll only use “whom” if it’s the object of a verb or preposition, as in the following examples:

“Who” is always in the subject position of a sentence or clause.

Caveat #1: Whenever your verb is a “be verb” (is, are, was, were…), you’ll find subject pronouns on either side of it. In these cases, the be verb links together subjects who identify with each other.

Caveat #2: With “like” or “as,” — or in constructions with “than” — you’re also dealing with an identity question, and if you’re using pronouns, you’ll need the subject form. The following examples include an implied verb in parentheses to make this clearer.

When “who” is the pronoun used with like, as, or than, it’s usually used to ask a question.

Most people would agree that “whom” sounds a bit stuffy. It sounds more formal, anyway. But the more you train yourself to use it correctly, the less likely you are to use the wrong pronoun when it matters most — for example, in a job interview or when you’re writing an academic paper.

The same goes for knowing whether to use whose or who’s in a sentence others will read. Using the right words makes your writing clear and easy to understand. Your reader won’t have any reason to stop and think, “Oh….oops.”

And you’ll both be happier for it.

Who’s more confident now about when to use whose?

By learning how to use “whose” and “who’s” correctly — as well as “who” and “whom” — you’re sharpening your skills as a writer. You’re learning how to create content free of mistakes that could interrupt your reader mid-sentence.

You know how it is when you’re reading and you run into a sentence that uses a “there” where a “their” should be. It stops you cold and wrecks your concentration.