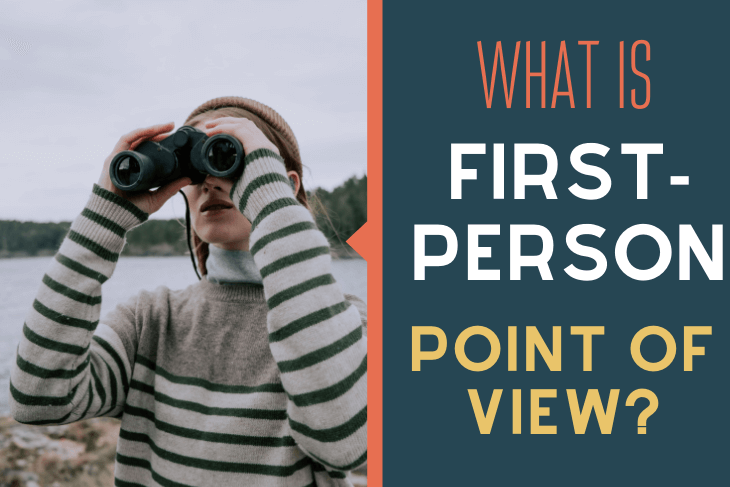 What does it mean to write from the first-person point of view?

And what are the top benefits and pitfalls of a first-person narrative?

How many of them used first-person perspective instead of third person (limited or omniscient)?

If you’re debating whether to use first or third person (or even second) with your work in progress, we hope this post will help you decide.

Let’s start with the obvious question: what is first-person?

What Is First-Person Point Of View?

Point of view, in writing, has to do with the perspective from which you tell your story. First-person perspective is the default with nonfiction works like memoirs and other autobiographical pieces.

Examples of First-Person Point of View

Here are some examples of sentences written in both central and peripheral POV.

If you’ve read any of the first-person point of view examples listed below, you know better than anyone how the use of first-person perspective drew you in and made the story more important to you.

As a writer and storyteller, think about how your own experiences have formed your perspective and voice.

Benefits of Writing in 1st Person Point Of View

Now that we’re clear on what first-person is, let’s explore the benefits of using it. Whether central or peripheral, your first-person narrator brings certain advantages over a third-person storyteller:

That last point is worth making. Authors who feel immersed in the story find it easier to draw their readers more deeply into it, too. And even with nonfiction, the first-person narrator’s personal experience lends credibility to the content they’re sharing.

How to Write in First-Person Point of View

Having a story to share and a preference for first-person perspective doesn’t guarantee you’ll find it easy to write or even get started.

The following steps can help with that.

The best place to start as a writer is to read the kinds of books you want to write.

If you’re not sure which ones use first person, download a sample and read it before buying the book.

Create a reading list and tackle it one title at a time.

Decide on the tense you’ll use.

Will this story occur in the present, or is your first-person narrative telling a story from their past, relating it from memory (as if it were only yesterday)?

The past tense works for both the central and peripheral types of first-person POV since either one could be telling the story from memory, as long as they survive.

Present tense can make your story feel more urgent, though, because the narrator is living the moments as they share them.

They don’t know how the story ends because, to them, it’s still unfolding.

Create a detailed profile for your first-person character.

Interview your first-person character and build a profile based on their answers and what you picture when you think of them. Make them real enough to speak and to have opinions of their own. Put them to the test and see how they handle it.

Give your first-person character a backstory, even if they’re not the protagonist. And decide how much of it you’ll share throughout the story. How much does the reader need to know to feel connected to (or at least interested in) the narrator’s perspective?

Consider the benefits of an unreliable narrator.

One of the pitfalls of first-person POV is all-knowing characters whose omniscience robs the reader of the chance to figure things out along with the narrator.

As with the present tense, an unreliable narrator raises the stakes and makes a satisfying outcome less of a given. There’s a chance it will all go wrong, so the reader has to keep reading to find out whether or not it will.

Make it clear as soon as possible whose point of view you’re using and what role they play in the story.  This is one thing your reader shouldn’t have to guess.

Think of openings like “Call me Ishmael” from Moby Dick — or the first line from David Copperfield: “Whether I shall turn out to be the hero of my own life, or whether that station will be held by anybody else, these pages must show…. ”

Both authors make it clear from the beginning who’s speaking.

You’re already telling the entire story from the first-person narrator’s perspective. Everything that isn’t another character’s dialogue comes from this character’s head.

In most cases, italics are more distracting than helpful: “Icicles as long as my arm hang from the gutters over the garage. When will this winter end?”

Italics can be helpful, though, when the narrator remembers someone else’s words, which come to mind at a moment when their full meaning hits home.

The italics set the spoken words apart from present-moment thoughts and dialogue.

First-Person Vs. Third-Person: All You Need To Know

How To Annotate A Book In 9 Key Steps

Those opinions can be stronger than those of other characters, or they can be more flexible.

As with real people, a character with strong opinions—and zero qualms about sharing them—but who can still laugh at themselves is more endearing than one with more flexible views who can’t bear to be criticized.

That said, your narrator doesn’t have to be the most likable character in your story.

Go easy on the “I” filters.

Just because your narrator is the one telling the story doesn’t mean you have to make it extra obvious whose senses are involved in the description of the story’s setting and other characters.

Reading a series of sentences starting with “I” gets old in a hurry. Mix it up by interspersing these I-sentences with less I-centric ones, as in the following example:

“I felt the presence of someone behind me before I heard the sound of their boots on the snow-covered sidewalk. The snow fell in flakes the size of dandelion heads, and when one landed between my jacket and the back of my neck, I felt a hand sweep it away before it melted and dripped down my back. He stopped beside me and gently pulled up my hood…. “

Stay true to your narrator’s voice.

The more familiar you are with your narrator’s unique voice, the easier it is to stay true to it throughout the story.

If the main story doesn’t do enough to help you develop the narrator’s voice, spend some time voice journaling as the narrator about anything that matters to them.

Be your narrator’s ghostwriter, and write the way they would speak.

Stick with one first-person narrator (at a time).

At the very least, each chapter should have only one character with a first-person point of view. The only way to be inside everyone’s head all at once is with third-person omniscient, which doesn’t use first-person pronouns (except in dialogue).

Too many first-person speakers confuse the reader. They should know who is speaking as “I.” Readers tend not to finish books that confuse them.

One voice at a time is enough for anyone to process.

Now that you have a better handle on first-person point of view, which stories come to mind as great examples? And how will you use first-person perspective in a story of your own?