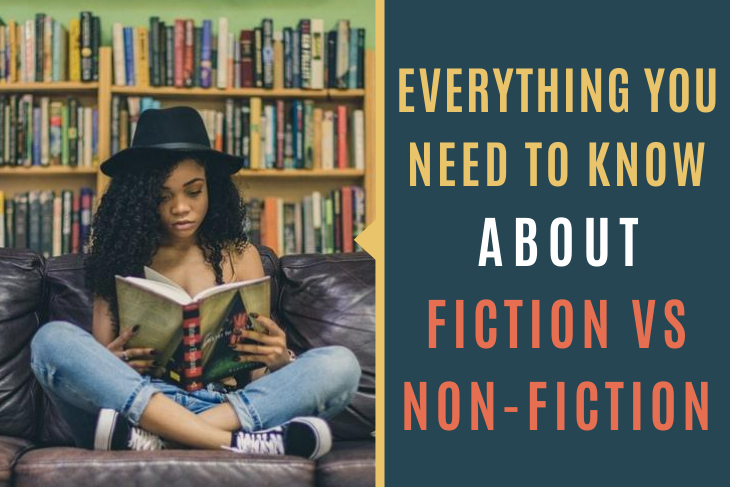 If a friend were to ask you right now, “How do you know whether to call a book fiction or nonfiction?” what answer would you give?

You think you have a pretty good idea of how to distinguish the two — until someone asks you to articulate the difference in your own words.

It sounds so simple, right? You could just say, “Fiction is imaginary, while nonfiction is true.”

But sometimes the two overlap.

If you were a judge in a fiction vs. non-fiction contest, what features would stand out for each contestant? Would fiction always be making things up? Would non-fiction be more formal and particular about details?

Is a short story always fiction? Is a magazine article always purely non-fictional?

It’s not so clear-cut after all. But there is a way to know the difference. And I hope you’re curious enough to keep reading.

The Difference between Fiction and Non-fiction

Fiction and nonfiction books belong in different genres for a reason.

But a fictional story doesn’t have to be 100% based on imagination, nor does every piece of nonfiction have to be dry and unimaginative.

Think of the last novel you read that included credible details about a specific place or about a particular murder weapon.

Those details were true, but the story and its characters were made up — though they may be loosely based on true events and real people.

Now, think of the most engaging magazine or newspaper article you’ve read recently.

It grabbed your interest from the first sentence and held onto it — not with dry facts but with relatable and well-written narrative prose.

But in order to see more clearly how to distinguish fiction from nonfiction, we need to know what each one is.

Fiction is prose that describes imaginary events and people.

It can also take a true story and change important details to create a new and no longer factual narrative.

So, is a novel fiction or nonfiction?

Look up the word “novel,” and you’ll see it defined as a “fictitious prose narrative of book length…” So, yes, a novel is always a work of fiction.

Short stories, on the other hand, can be either fictitious or true.

In the latter case, if the author is telling a true story in a compelling way, we call it “creative nonfiction.”

So, what are some general examples of fiction?

But what about fictionalized accounts of true stories, you might ask?

What about when Hollywood gets permission to create its own theatrical version of a true story?

Well, you probably know by now that the words “based on a true story” don’t guarantee that all the details will be true.

Unless it’s a documentary, if you hear the word “artistic license,” you can safely classify the Hollywood version of the story as “fiction” — especially if you know at least one critical detail to be untrue.

For example, if Hollywood substituted a daughter for a son or changed the setting from Alberta, Canada to Montana, you now have a fictionalized account of the story.

Or if someone recounted the history of the Crusades to include zombies or mythical creatures, the new creation would be a work of fiction.

But what if someone were to write a detailed account of their high school experiences — exposing the indiscretions of staff members and fellow students but changing the names of their “characters” to avoid a lawsuit?

While the names may be different, if it’s easy to identify the characters who did unseemly things, a lawsuit might still be on the table.

But that’s for a lawyer to decide.

Fiction doesn’t pretend to be non-fiction.

It doesn’t hold itself responsible for deviations from the truth. It makes the most of them.

It also makes the most of every element of truth that makes the story more relatable to its target audience.

Here are some specific examples of fiction:

Novels like J.R.R. Tolkien’s The Hobbit and The Lord of the Rings and the movies based on them
TV series like Doctor Who, Fringe, and Stargate: Atlantis
Short story collections like Stephen King’s Rita Hayworth and the Shawshank Redemption

17 Things to Write About For Your Next Nonfiction Book

How to Outline a Nonfiction Book

10 Elements Of A Good Nonfiction Book

Non-fiction is narrative prose in the service of facts.

While the author may be sharing his opinions or conjectures in response to those facts, the purpose of non-fiction is to faithfully communicate what is factually true.

All of the following are general examples of non-fiction books:

And this is a fairly small sampling.

How old were you when you wrote your first research paper?

Do you remember how careful you had to be to keep your facts straight and cite your sources?

Or when was the last time you had to defend your position with a logical argument, verifying each premise to ensure that your reasoning was not only valid but sound?

One false premise or errant detail would have been enough to give your opponent a firm grip on the rug beneath your feet.

Non-fiction doesn’t always tell a story, but it depends on truthfulness for its credibility and usefulness.

Creative nonfiction also depends on the author’s ability to convey the truth without putting readers to sleep.

The truth is what it’s there for; creativity and craftsmanship are what make the truth easier to assimilate.

What gives non-fiction meaning is its faithfulness to the truth or to the facts. So, non-fiction might tell a story, but it never sacrifices the truth to it.

Here are some specific examples of non-fiction:

So, if you’re fond of nutshells (as long as they’re not underfoot), you could tell your inquisitive friend the following:

The purpose of fiction is to tell a story which may have true elements but is not a factual account.

It doesn’t have to be; factual accuracy isn’t the source of its power.

The purpose of non-fiction is to communicate facts and associated questions, thoughts, and opinions.

It might tell a story, but the search for truth is its reason for being. It never sacrifices factual accuracy to make the story juicier.

[Besides, facts can be plenty juicy.]

So, fiction puts story first, often at the expense of reality; and non-fiction puts truthfulness first, though it can also make use of storytelling.

Do you have a preference for one or the other? Or do you make time for both?

Whatever’s currently on your reading list, may your curiosity and imagination influence everything you do today.