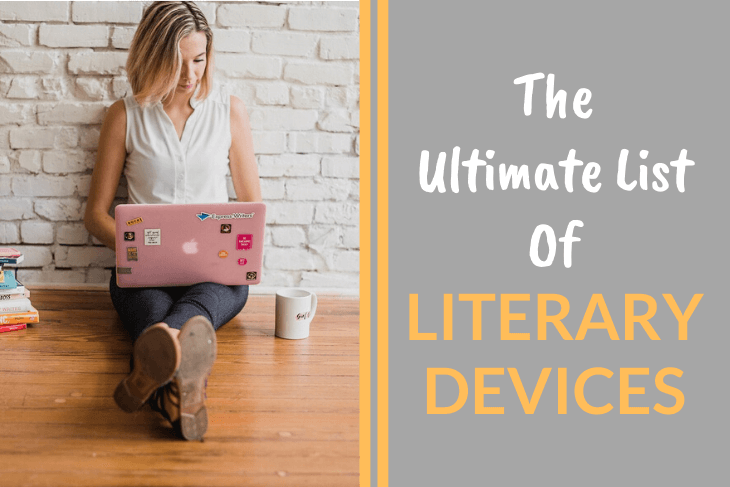 You know what a metaphor is. But when someone asks you, “What literary devices do you use the most in your writing?” you’re not sure how to answer.

What exactly is a literary device, anyway? And what if you’re using one and don’t even realize it?

Because it happens. You pick things up when reading other people’s stories, and before you know it, you’re using them in your own.

But which of those are literary devices, and which are just stylistic preferences?

Welcome to our literary devices list, which can help you identify each one by name and understand how to use it.

An allegory is a symbolic story where each character or group of characters represent something else — a vice or virtue, an idea, a political movement, etc. — to convey a message or moral.

Alliteration involves repeating the same initial sound (and often the first letter) in a string of words. Using this device in your book’s title can make it easier to remember.

Related to this are assonance and consonance, which involve the repetition of vowel sounds or consonant sounds, respectively.

When you allude to a real person, place, or event in your creative writing, you invite the reader to see a connection between something in the story and something in real life – something familiar to them – to draw them deeper into your narrative.

This is when the writer intentionally messes with the chronology or timeline for comedic effect.

For example, in a story where the protagonist visits characters from history, one of those could speak using modern slang.

Writers use these to establish a relationship between two things or ideas based on similarities. They then use that relationship to make a point or to make a situation clearer to the reader.

This is a story within a story or a short story used to illustrate a point in a work of nonfiction. It’s also possible to write an entire book with a collection of anecdotes with a unifying goal or theme.

This device uses a famous idea, person, or object to convey meaning. Immediately recognizable, it connects to what the reader already knows to build a story that is both familiar and new.

Writers using this device allow their story’s plot to depend on the overall growth of the central character. The storyline essentially follows that character’s arc, whether it’s positive or negative.

Use this device to express the resistance your central character encounters — externally or internally — in their pursuit of something they want.

This is when the writer brings an implausible concept or character into the story to ‘miraculously’ solve a problem and save the day.

With diction, you use language to express formality or familiarity. Diction in dialogue can help the writer distinguish one character from another.

Also, depending on their reader, nonfiction writers will use of the four different types of diction:

Like the prologue, this device is for narrative outside the time period covered in your book’s chapters.

The epilogue tells the reader what happens to the characters after the story’s end and can either tease the next book in the series or wrap things up for the reader.

While these usually take the place of words specifically related to intimacy, they could include any word or expression used in place of something considered impolite, indecent, or insensitive.

This is another character in the story who contrasts with a central character, usually to highlight one of that character’s attributes.

12 Of The Best Writing Websites To Inspire You To Write

Writers use foreshadowing to give their readers a hint of what’s to come. These can be bits and pieces of information that the reader doesn’t initially recognize as clues but that they later remember. And what they remember helps them understand what’s going on.

You can use these to provide important information from a character’s past and draw your reader more deeply into the story.

Some writers use flashbacks to show how something in the past has contributed to the present situation — or to provide clues on how to handle the present crisis.

Hyperbole is exaggeration used to emphasize something or to make a point more dramatically.

With imagery, you use visually descriptive or figurative language to paint a picture for the reader. This is showing versus telling — creative writing 101.

The caveat, here, is to use as few adverbs as possible, choosing instead stronger, more descriptive verbs to give the reader a clearer picture of the action in the story. Words describing the scene are also important, but every word should earn its place.

With irony, you use language to convey a meaning opposite to what is literally expressed by your choice of words. There are three types of irony:

With juxtaposition, the writer places two directly or indirectly related entities — people, concepts, places, ideas, or objects — close together to highlight the contrast between them.

It’s similar to an oxymoron, but instead of two contrary words, you have two contradictory phrases or bits of dialogue.

This is one of the most popular literary devices and one you probably learned about in school. With a metaphor, you essentially call one thing something else even if, literally speaking, the two are not equivalent.

A simile is a type of metaphor that uses the word “like” or “as” to soften the connection between the two objects compared.

A motif is an idea or element that dominates a story and gives the reader clues as to what will happen. Like archetypes, motifs are often easy to recognize, even if they haven’t been around for centuries or are tied to a specific culture or belief system. Archetypes are more universal.

Certain motifs show up repeatedly in fairy tales and folklore. And readers of certain genres expect some motifs as part of the storyline.

This device has to do with words that resemble the sounds they refer to. They’re used to evoke that sound in the reader’s mind to make the story come to life.

An oxymoron puts two contrary words together to create a contradictory meaning. Writers use this device to create tension, to illustrate a paradox, or just to make their readers laugh.

This is a statement that sounds illogical or nonsensical but, on closer inspection, could actually be true or plausible. Unlike an oxymoron, a paradox is a complete sentence, not just a combination of two words.

Writers use personification when they give human characteristics to nonhuman characters and objects. Unlike anthropomorphism, though, the nonhuman objects remain as they are; they only seem to act human in a particular context.

This is an introduction to a story and can provide some interesting information about the main character’s past or provide a sneak peek or some clues as to what’s about to happen in the present (i.e., foreshadowing).

The prologue is often (though not always) told from the main character’s point of view.

The goal of satire is to make fun of human weakness, a character flaw, or a morally questionable policy.

Writers sometimes use this device to make more people aware of the objects of their satire — not so much to amuse or entertain us as to motivate us to take corrective action.

This device uses an object or action to mean more than its literal meaning. Think of what simple objects in your home mean to you: the dinner table, your work desk, a favorite painting on the wall, a collection of stones gathered from your travels, etc.

How will you use these literary devices?

Now that you’re better acquainted with these 30 literary devices, which stood out for you as the ones you use the most?

Or which are you seriously thinking of adding to your latest work in progress?

Were there any that made you think, “Huh. That’s not what I thought it was.” I had the same thought when I found out the real meaning of “Deus ex Machina.”

As long as we keep learning, right? And being a writer means learning something new every day. I hope we can be a part of that for you.

And I hope you’re having as much fun with this as we are.